I finally woke up at around 8:30. Yikes! This is no way to start! We have things to do and places to go to.

A quick hot shower to combat the FREEZING cold room. I found out later that the space heater was connected to an outlet that turns off when I turn out the lights. Hmmm… That’s not going to work. The apartment is large and lovely. But it is clearly designed for seasons when the temperature is higher than 10 degrees. Those tile floors are brutally cold.

I found the Driedgers in the kitchen checking their ‘devices’. It’s warmer in the kitchen because it is a smaller room where the doors can be closed and there are TWO space heaters and two people sitting in there. Make that three…

We went out for breakfast — a short walk along the promenade that fronts the beach. Lots of outdoor tables at the restaurant we went to. Not so many outdoor customers, although, just like at home, smokers are banished from all confined spaces and a few hardy souls were ‘hubbering’ outside. Not us. We went inside and tried a few tables (there were only a few tables) until we’d decided which spot was the ‘warmest’, and I use that term loosely. But the coffees were hot and the waffles hit the spot.

On the way home we stopped at one of the two ‘Supermercados’ and bought some supplies for tomorrow’s breakfast. We’d been invited to visit Jim and Bonny at their AirBnB condo in a neighbouring village for supper tonight, but Dave and I thought we could probably squeeze in a game of golf before heading out to meet them at 4pm. So we loaded up our clubs and left Marylou to hold the fort while we drove out to a nearby course, just to ‘check it out’.

We asked about golf at the front desk. We hadn’t made a reservation — and were surprised and delighted when the girl said how about right now! Yes! We opted to take a ‘buggy’ instead of walking because there was a special deal available. That turned out to be a good call. We were paired up with a lovely couple from Ireland. For the next 4 plus hours the four of us managed to hit some fine shots — but we also got quite familiar with the trees and the scrub brush that lines each fairway. The course was quite nice, and although the layout looks relatively straight forward (as in, on most holes you are required to shoot the ball straight and forward), with a fairly brisk (and cold) breeze to contend with, we soon realized that it was a sufficient challenge to in all likelihood warrant a return visit.

We’d been invited to the Peters’ place for four o’clock so we could go for a bit of a walking tour before supper. Well, when we were still working our way down the 15th fairway at 3:15, we realized we would not be able to make it by four if we finished the game. So we aborted our game and bid our new Irish friends adieu and hurried home to pick up Marylou.

Marylou was just starting to send Bonny a text that we would be ‘a little late’ when Dave and I rang the doorbell. A quick change and we were back in the car heading to Porches (the town where they’re staying for a couple of days), with Google Maps guiding Dave as he drove back along the A22 Autobahn.

We arrived a bit late, but not too late for Jim and Bonny to lead us down a long beach staircase so they could show us the incredible cliffs along the coast, while Jim’s brother Rob and his partner Evelin prepared supper for us. 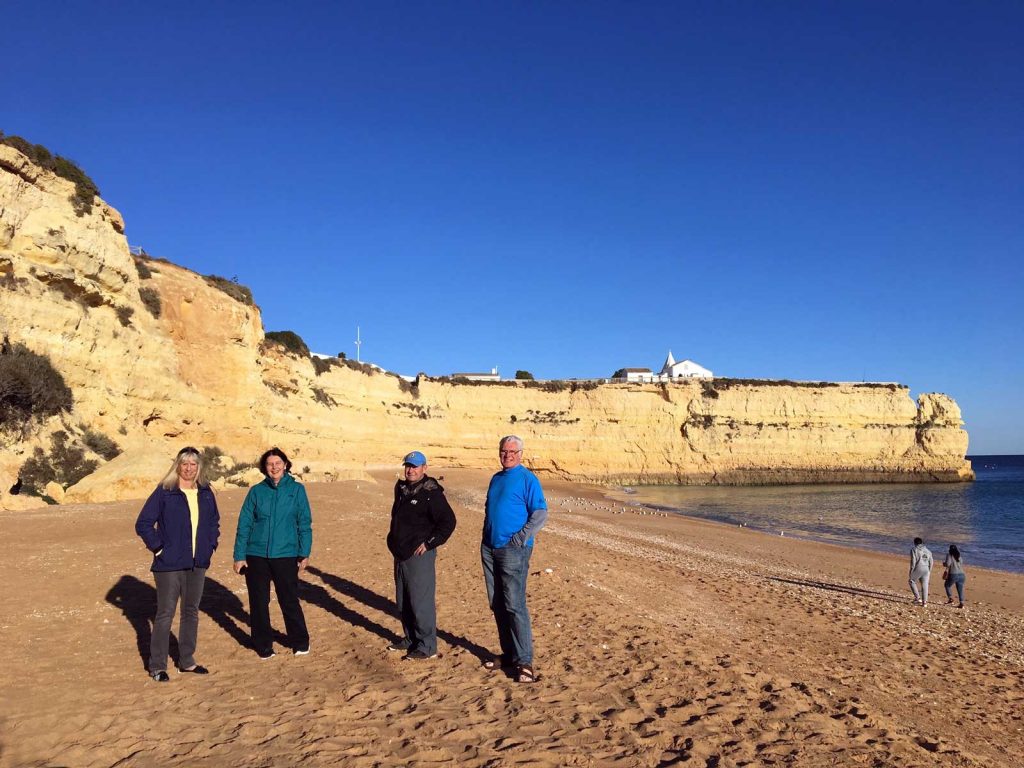 Lovely. Back at their apartment we enjoyed appetizers and drinks. The Peters brothers and their women have already travelled many roads here in Portugal. They are here for one more week, ending their tour in Lisbon. It sounds like they’ve had a marvellous time.

WE certainly had a marvellous time there with them tonight! Robert and Evelin prepared a feast of shrimp, mussels and paella, salad, beer and wine, and a dessert of chocolates and some Portuguese Tawny Port. We had a very fine visit — lots of interesting conversation around the table. I guess sometimes you have to go far away to really visit with people ‘from home’!

We said goodbye and returned to our apartment. Maybe, after such a fine evening, it didn’t seem quite as cold anymore. Still, we huddled together in the kitchen, now all three of us hovering over our devices with our space heaters doing their best to keep us feeling warm. I had to update my blog — and now I have to hurry and ‘save’ my work before the battery dies. And so ends Day Two — and a good day it was!