Good morning. What’s on the agenda today? Well, I thought we should take Peter’s car out for a spin.

So mid-morning that’s what we did. Started up the Volvo, drove it out of the garage and turned it south at the intersection. And we’re on the road! 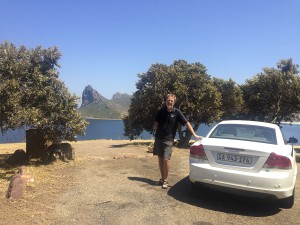 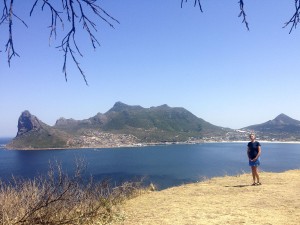 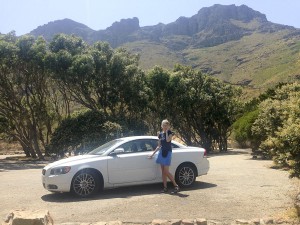 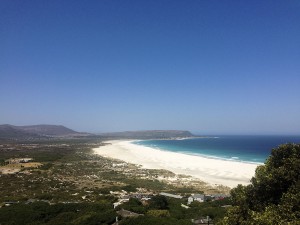 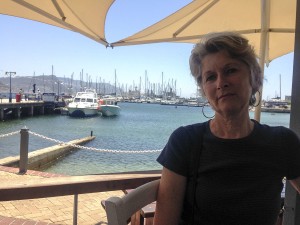 We didn’t really have a plan, but we’d talked about maybe just heading down to Haut Bay and then back home for lunch. Well shoot!, that only took about half an hour and we were just starting to get comfortable! So we pressed on. And soon we were going up and down along the coastline, enjoying some of the most spectacular scenery this side of Chile! The driving was very fast, but we saw probably around a hundred cyclists, and boy!, some of them were coming down the winding passes might fast!

At one point, near Chapman’s Peak, we had to pay a 40 Rand toll, and THEN the road got even more scenic. The Cape’s famous fynbos, growing on steep cliffs, with the road winding up and down, hugging the coastline. Even the rockfall shelters are beautiful!

We were following the M6 highway, which took us across the peninsula and down to False Bay on the other side. We could have continued all the way down to Cape Point at the southern tip, but decided to stop at Simon’s Town for lunch. We parked the car and went across the road to a harbour-front strip of restaurants on the town pier. We enjoyed a big platter of seafood and cold beers, while we looked out at a bay of beautiful sailboats, and were entertained by 5 old black men who were doing a pretty good impression of Ladysmith Black Mambazo. All for about fifteen bucks!

Back in the car after lunch. We took a different, more direct route back to Cape Town. We were using my iPhone with GoogleMaps as our GPS, although the roads and directions were very clearly marked. (Actually the GPS wasn’t the only one telling me how to drive! My co-driver, sitting to my left, was offering constant advice regarding the speed I was driving — I think every time we were in the far-left lane on the four-lane highway she thought I was in the PASSING lane, and forgot that we were in a left-hand traffic country!)

Well, the phone’s GPS served us well, but just as we entered Cape Town, with a drive THROUGH the city left to go, the phone beeped and warned us that the battery was about to go into hibernate-mode. Yikes! No, no, no! Thankfully we managed to get all the way back to our garage before it actually shut down. Whew! I guess I’ll have to go look for a cigarette-lighter adapter before our next drive out into the country.

Back in the apartment I selected a Glenn Frey and Eagles playlist from my music library and hooked up my phone to the stereo. Sue sat on the deck and read. Around 5 o’clock the phone rang. Well actually, A phone rang. I picked up the handset on the kitchen counter — Hello? Hello? — nobody there. I had just sat back down to continue my Eagles reverie when the phone rang again. Again no answer. Huh? Then, while I was standing there looking at the phone, wondering what was going on, a phone rang again! I opened up the door to the storage cabinet under the phone, where the hot water tank is, and there on top of the hot water tank was an old wired in telephone. Hello? Ah, it’s the intercom for the buzzer at the front gate!

I let in the plumber who was here to check on our hot water tank. It only took him a few minutes to deduce that it was the breaker, an electrical problem and not a plumbing problem. So I am to let him know if we have any more hot water issues and if we do he’ll be back with an electrician.

Okay, that’s settled. Time for happy hour out on the patio. G&Ts with a portion of Biltong (for me, some kind of cereal mix for Sue). And then back to our reading and computing. My mom sent me an email complaining that she wasn’t getting enough stories from me! Really? I’m spending half a day at my laptop writing about things we do the other half of the day! So I called her up — and sure enough, they are one day behind on the journal! Oh well, it was good to talk to Mom and Dad — they both seemed to be in good spirits.

At 7pm we went out for supper. Today we turned right at our corner and ended up at a Thai place. It was pretty hot still, so of course we ordered the ‘hot’ chilli paste with our meals. The service was quite relaxed — after a quick gelato from the shop next to the restaurant we got home at 9pm. Just in time for another episode (or two?) of Narcos on Netflix.

In the news: I was shocked and saddened to learn of the death of Glenn Frey yesterday. The Eagles created a lot of the music that became the soundtrack of my life. RIP.