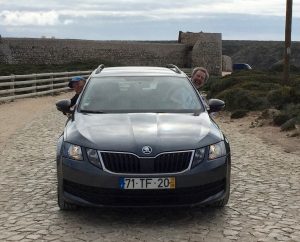 When I got out of bed this morning and looked outside the sky was cloudy and the deck was wet — it must have rained, and it looked like there might be more before the day was done. After breakfast Marylou found the article about the top ten scenic drives in the Algarve — and copied the places and points of interest into her notes. Then we got in the car, and with Dave navigating and Marylou reading her notes, I drove along the N125, heading west.

The theme of the trip seemed to be “Henry the Navigator”, who, as Marylou has already discussed in HER blog, would not have been considered such a great guy in today’s world, mostly because he ‘navigated’ slaves out of Africa and into Portugal. But in spite of that, we did our best to follow his footsteps to the west coast of Portugal today. We stopped to see his home, his church, his chapel, his mistress’s chapel, his pub, his library, his lighthouse — okay, maybe I’ve missed a couple of spots, but you get the idea. One of the highlights for me was a hike to Henry’s fortress — a long drive along a narrow road that became a trail that became a path that became not for cars, so I had to back up about half a mile, park, and then HIKE it. We found the beach, saw the fortress and the graffiti that was sprayed all over it, and then hiked back. 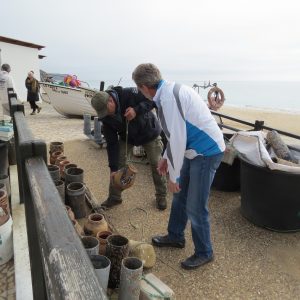 At another stop I found a couple of old fishermen mending their nets beside their fishing boat on the shore. One of them could speak a bit of English, and after a bit of gesturing and the fisherman saying the same Portuguese word over and over, each time little bit louder until we finally guessed what the word meant, we learned about how to catch octopuses (octopi?), which they do by dangling terra cotta pots down into the ocean and then yanking them up and scaring the octopus out of them (with a few drops of bleach) and onto your plate.

One of the next stops was Henry’s chapel. We parked, walked the cobblestone walk up to the front of the church and watched the woman inside quickly close the front doors, heard the double-lock, and then had the ‘ticket taker’ guy up on the hill yell down that they were closed for lunch. I have to say, we were not altogether disappointed to hear that. At least I wasn’t. It was at LEAST 12 noon by this time, and high time for lunch anyway. Back in the car, seatbelts on, hook up the phone to the charging cord, punch in the next stop, and off we were.

Speaking of lunch, we found ourselves in a TINY little town, the name of which I can’t remember, and parked on the cobblestones in the town square, and went into what SURELY must have been an “authentic” Portuguese restaurant. Marylou’s notes suggested we “must try the gooseneck barnacles”. Well, brave intentions failed us — we asked if we could just SEE what that might look like. The server said ‘no problem’ and promptly returned with a small sample on a small plate. 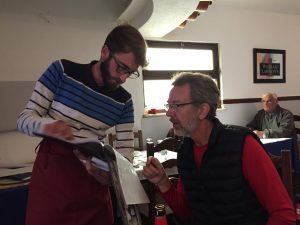 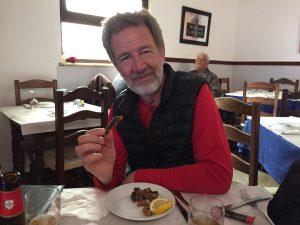 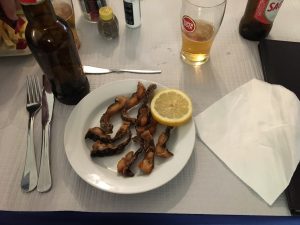 And so Marylou ordered a chicken sandwich and Dave a cheeseburger. Both of those meals sounded great to me, but instead I ordered “moreia ray eel”.  The server explained that they were FRIED eel, and although HE didn’t like fish, I would have to eat everything on my plate. And I did. Not bad.

And then we continued on our drive. We got to the town of Sagres, which I now find isn’t at all where the Sagres Cerveja which we’ve been drinking with our eel dinners comes from. No, THIS Sagres is the town that is at the western, or probably SOUTHwestern tip of continental Europe. Okay, I guess that’s almost as cool. We parked and walked around and I took some photos. If I’d had a telephoto lens I would have zoomed in on that sign way out in the distance, the one in Cape Spear, Newfoundland, that informs visitors there that they are at the EASTERN edge of the North American continent. But I only had my iPhone camera. In any case, here are a few of my photos of Sagres, or more precisely Cape St. Vincent, which is just west of the actual town. 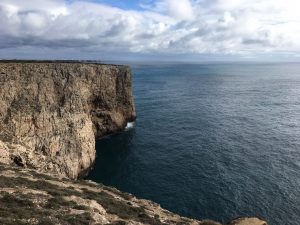 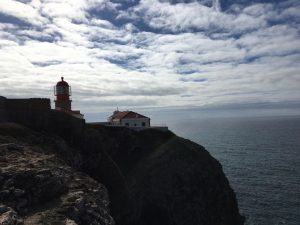 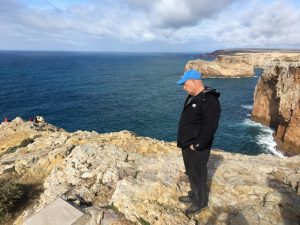 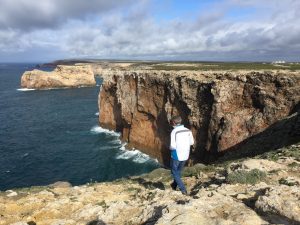 And that’s how our field trip for the day ended. We hightailed it back to our place. I stopped to pick up a few groceries before joining Dave and Marylou in our ‘cozy’ kitchen. There we had a little happy hour and reconnected with our devices.

At 7pm we went out for Chinese food at a restaurant just steps from our place. We discussed plans for tomorrow — maybe a walk to the OTHER neighbouring village. We’ll see.

And that brings you up-to-date again for another day. So I bid you Tchau! Até mais.