Sue has been completely absorbed in the life of Ernest Hemingway — she read “A Paris Wife” (a book ABOUT Hemingway’s first wife, fiction based on facts) and that led her to her current book, Ernest’s Hemingway’s posthumous memoir, “A Moveable Feast”. In that book Hemingway says: Il n’y a que deux endroits au monde où l’on puisse vivre heureux: chez soi et à Paris. (There are only two places in the world where we can live happy: at home and in Paris.)

After another VERY lazy morning at home, we finally ventured out at around 4pm. We once again headed down to central Paris. The plan was to walk down to the Musée d’Orsay on the left bank, and if we were too tired after visiting the museum we could take the metro back.

We arrived at the museum and got in line to buy tickets. Yeah, on a late Thursday afternoon at the end of September there is still a winding lineup at a museum! We bought the ‘complete’ ticket which got us into the regular displays as well as the special exhibitions (more on that later). 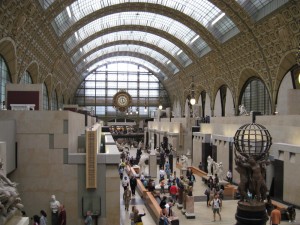 The museum building itself is right along the Seine River. It was once a big train station, but in 1986 it was converted into a museum. So it’s a big open space with lots of little ‘rooms’ on either side, each one a little gallery for a specific artist or art style. We spent the next few hours slowly wandering around the various ‘rooms’. We saw lots of famous paintings and sculptures, by lots of famous artists; van Gogh, Renoir, Monet. It was kind of cool seeing something you’ve often seen in pictures ‘for real’. You go, “Oh yeah, I know that picture!” It’s usually quite a bit smaller than what you thought it would be, and you stand there in front of it and wonder how long you should stand there in front of it. I’m sure Marylou Driedger would have lots of things to say about many of the things we saw and would not have been at all satisfied by how quickly we managed to make our way around the big hall.

When we got to the end (well, actually, back to the beginning) of our tour there was still that ‘special exhibition’ for us to visit. And if we thought we hadn’t seen enough pictures and statues of naked people for one day, we were in for a bit of a treat! This is a case where if I’d known even just a little bit of French I probably would have saved myself a bit of money. The exhibition was called “Masculin / Masculin. L’homme nu dans l’art de 1800 à nos jours“, which, when I put that into my handy-dandy translator on the computer, means “Male / Male. The naked in the art from 1800 to the present day.” So there we were, along with lots of (mostly) little old ladies, circling around in a maze of all manner of naked men displays. Yeah, you can look it up online (since I won’t be posting any pictures here!) — that’s what we saw! When I taught junior high I would have given these ‘artists’ detentions for doodling up some of these works of art! But when you hang the thing up in a frame and shine a little spotlight on it people stand in line and pay money to see this.

After we’d made our escape from the museum we took a long walk along Boulevard St. Germain. We were looking for the “Les Deux Magots” café, where Ernest Hemingway and Gertrude Stein spent many a glorious afternoon drinking coffee and hobnobbing with their famous friends back in the day. Wow! Sue’s just read one book about Ernest Hemingway and now we are full-fledged groupies! Unfortunately the café was ‘closed due to an exception’ so we had to settle for a photo.

But wait! Right next to the café is the Café de Flore, ANOTHER café (those Parisians and their cafés!) and it too was a favorite hangout for Hemingway. And although it is completely packed, we are lucky enough to get a little table after only waiting a short while. So we sit down and order, just like Ernest and Gertrude, and watch people (many of whom are walking back and forth, hoping for an open table just like we did) while we slowly sip our beer and coffee.

We decided that after such a refreshing break we could easily walk all the way back home — so we did. We again made a pit stop once we got close to our place, picking up more groceries for supper. While Sue did her magic in the kitchen I called my folks on the phone. It was quite a bit after nine when we had a lovely stir-fry for supper. Sue called her mom. Then we got comfy on the couch and did our best to stay awake through tonight’s DVD movie feature, Amélie. It’s a 2001 romantic comedy that takes place in Montmartre, right where we are staying! We’d seen it years ago, but neither of us could remember what it was about. That probably didn’t change after tonight’s viewing either.