Hmm… I kind of ‘wasted’ this day away. I woke up early and then frittered away a few hours putzkying around the house. I had an eleven o’clock appointment for an oil change on the van in Apache Junction. I was almost late for it!

I was hoping the mechanic could figure out what might be the cause of that ‘howling’ noise that comes from my rear wheels when I’m driving slowly. They took off all the wheels and checked the brakes and pronounced them good — lots of wear left, all seemed to be just fine. They ‘sawed’ a few notches into the brake pads, so maybe that would remedy the problem. (It did not. A few hours later as I was driving around the parking lot at the Superstition Springs mall looking for ‘the best’ parking spot, that ‘waa, waa, waa‘ was as loud and annoying as ever.)

I drove to Power Road and ate lunch in the food court at the mall there. I was hoping there might be a movie that would interest me at the cheap theatre there, but there were only two shows that I could see myself sitting through and the start times didn’t match my schedule.

I wasted another hour at Vans Golf shop just up the road from the mall. I don’t actually know what I was looking for — well, I KNOW that I was looking for something that would magically improve my golf game, but I know better than to believe that just because it works in one of those simulators they have at the shop doesn’t mean it will work on the course. In the end I left my irons and my driver at the repair shop there to have them re-gripped. I’ll pick them up tomorrow.

I had signed up for a free Steven Pinker lecture at Arizona State University for 5:00 today (thanks to a recommendation by Hans Neufeld). I’d been getting a steady stream of emails from the event organizer encouraging me to let them know if I was NOT going to attend so they could give the ticket to somebody on their long waitlist. Must be a hot ticket! The latest email said not to be late — if I wasn’t there by 4:55 I would forfeit my ticket. Okay, I might as well drive to Tempe; the Tempe Marketplace is a large shopping centre not far from the university and I can waste a bit of time shopping this afternoon.

So I went to all my favourite stores. Not really, unless you call TotalWine a store. Wandered around and looked at all the interesting imported and craft beers. I also went to a belt store there — Tim had bought a cool belt when he was here and I wondered if I might find one like it. I did. So I bought two, one black and one brown. (What is with me? Now I’m starting a belt collection? This is exactly why I do not go shopping. I know better.) Too bad I’d had lunch — there are a lot of interesting eating places here. Maybe I’ll come back after the lecture.

A little after four I drove down to the university. Traffic is getting busier. I circled a few times and finally drove into a parkade. I thought it was close to the hall where the talk was going to be, but I ended up walking half a mile, zigzagging around and between all the various university halls and buildings, looking for ‘Old Main’. I guess classes were out and the walkways were crowded with young people, carrying backpacks and gazing into their phones, going the other way.

The hallways leading into the lecture hall were lined with folks. Wait List #1. Wait List #2. I went to the registration desk and one of the attendants there drew a nice fluorescent yellow highlighter line through my name on the list. And in I went. Row 3. Right on! 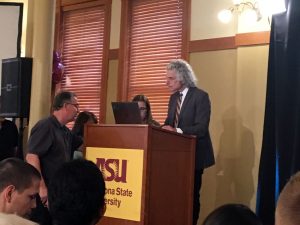 I actually don’t know who Steven Pinker is! The talk was entitled “Why Free Speech is Fundamental“. Hans had said he really wished he could hear him. When MaryLou heard I was going to see him she texted that she would love to hear him. The hall quickly fills up. Standing room only. Steven Pinker is up on the stage, looking at his prepared slides on his laptop. I take a photo.

The lecture is mostly read from his notes. It is interesting, and especially so since I am in Trump’s America, where truth and civilized discourse is under attack. But Pinker doesn’t just criticize the alt-right. He suggests that universities also suppress free speech when they disinvite controversial commencement speakers. He believes that free speech is a fundamental right and in his talk he explains how important that ‘First Amendment’ is to a modern democratic society.

Steven Pinker is listed as one of Time magazine’s “100 Most Influential People in the World Today”. Steven Pinker is an optimist. He believes that things can and will get better. He makes references to his latest book, “Enlightenment Now: The Case for Reason, Science, Humanism, and Progress“. I think I will have to buy the book.

It is fun to be here. It’s invigorating. After the lecture there is a question-and-answer session. Long lines form behind the two microphones that are set up in the aisles. After about an hour the moderator cuts them off. It’s time to go — I skip the reception in the hallway and go try and find the parkade where my van is parked.

I had planned to go back to the Tempe Marketplace for dinner but I changed my mind. I had a fridge full of food and drink at home and it was already 7:30. It would take at least half an hour to drive home.

Back at the house I lit the barbecue and made myself a gin and tonic. Checked out my new belts while the hotdogs were sizzling on the grill. After supper I sat down and watched TV again — more PBS Martin Luther King specials. I guess it’s the anniversary of his assassination. I remember that day back in 1968. I was 12 years old. We were visiting Abe Klassen, Tim’s grandpa, on the farm. The boys were playing outside while the dads were watching the NHL playoffs on TV. Dallas Northstars vs the L.A. Kings. The game was interrupted by a news flash. Dr King had been shot. I didn’t know who Dr King was, but I remember my dad saying this was not good. He said there would be trouble ahead. Riots and unrest. Tonight’s documentary showed that that IS exactly what happened.

I went upstairs so I could fall asleep watching Jimmy Kimmel. What else is new?