Alarm woke us up at 2:30am. Picked up Mart and Virlon and Tim, Alex, and Max and were on the road to the Wpg airport by 3:30. After a week of record snowfall and cold temperatures, we were lucky that the roads were clear and driving was good this morning. The humungous Colorado blizzard that was forecast for today wouldn’t arrive until noon. Parked the van and sent an email to Walter so he’d know where we were parked when he’d pick it up later in the day. Checked in, and loaded my (double-packed) golf clubs on the oversize conveyer. Then lined up for customs. Said goodbye to Mart and Virlon, who were on their way to see Thaddeus in New Jersey.

We had a 2-hour connection time in Vancouver before arriving in Honolulu at 2pm. (Turns out many afternoon and evening flights out of Winnipeg were cancelled due to the blizzard – we were lucky!) Took a taxi to our hotel and checked in. Sue and Alex had a bit of a rigmarole checking in – turns out we did NOT get the ‘suite’ we thought we’d booked – and we finally settled for 2 adjoining rooms with twin double beds in each. Oh well, Sue will fight it out with Expedia later.

After unpacking and connecting to (surprisingly good) Wi-Fi, we went out into the neighbourhood. We took the free hotel shuttle bus all the way to the Aston Waikiki Hotel, right next to our ‘old stomping grounds’, the former Hawaiian Regent Hotel where we used to hang out 35 years ago – and had our first supper together at the Tiki Bar & Grill. Max was amazing – after staying up for more than 18 hours he was still smiling and carrying on and entertaining us! Back at the hotel he was asleep by the time his head hit the pillow. The rest of us were not far behind.

Boxing Day in Waikiki. Max and Tim both slept in – nearly 12 hours of sleep. We had a late breakfast at the IHOP adjoining our hotel. In the afternoon we had our first (of many) happy hour in the hotel room. For supper we went to the International Market Place, just down the road from our hotel. It’s had a major overhaul since the our last visit; all the old local craft booths are gone, replaced by modern (expensive) shops and restaurants. We ate at a very busy Ramon Noodle restaurant. Here’s a little gallery of photos of Max at various restaurants in Hawaii. 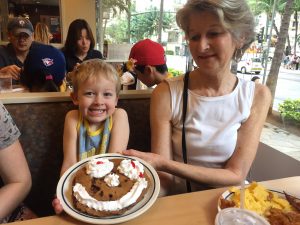 Breakfast at the IHOP next to our hotel. 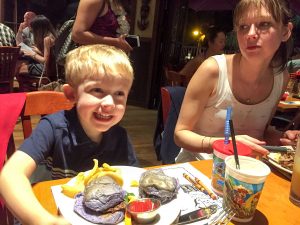 Max has purple burgers for supper at the Aston Hotel. 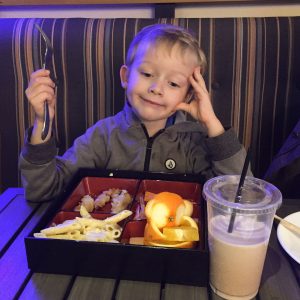 Hmmm… What shall I try first? 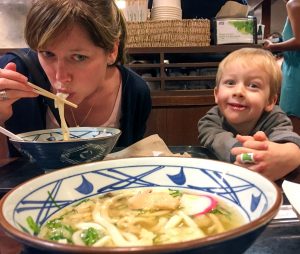 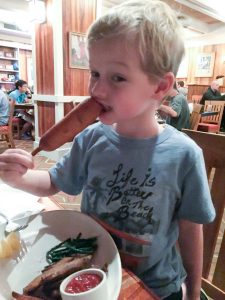 Max gets the corn dog option at the Hula Grille. 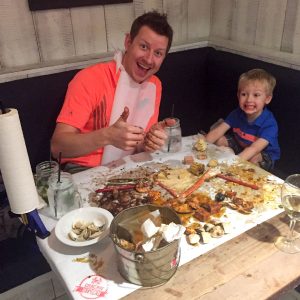 Enjoying a seafood extravaganza at the “Crackin’ Kitchen” 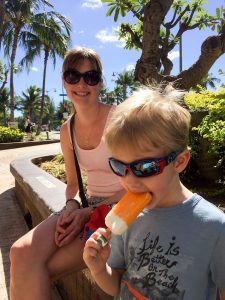 A popsicle for afternoon ‘coffee break’. 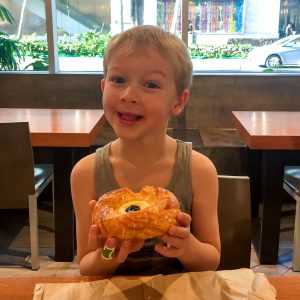 Pastry for breakfast at the Hilton Hotel. 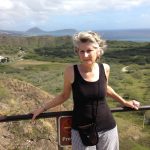 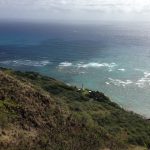 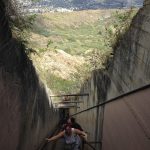 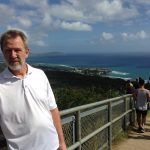 A change of pace: We picked up McDonalds for breakfast and had it in the hotel room. Max especially loved it. Then Tim and I took an Uber taxi to the Ala Wai Golf Course, just across the canal from our hotel. I’d called ahead – no reservations accepted, but the pro shop suggested we go ‘stand-by’ and we’d probably get on. Which we did. As soon as we arrived. Had a bit of a misty shower on the first tee, but it quickly subsided and we really didn’t even get wet. We were teamed up with a couple of local guys and had a very enjoyable round. The greens were not in very good shape, and the course is certainly not one of the better courses in the area – but we had a great time. After all, we were golfing! And back home people were just recuperating from a weekend of shoveling, and anticipating (what else?) another big winter storm. 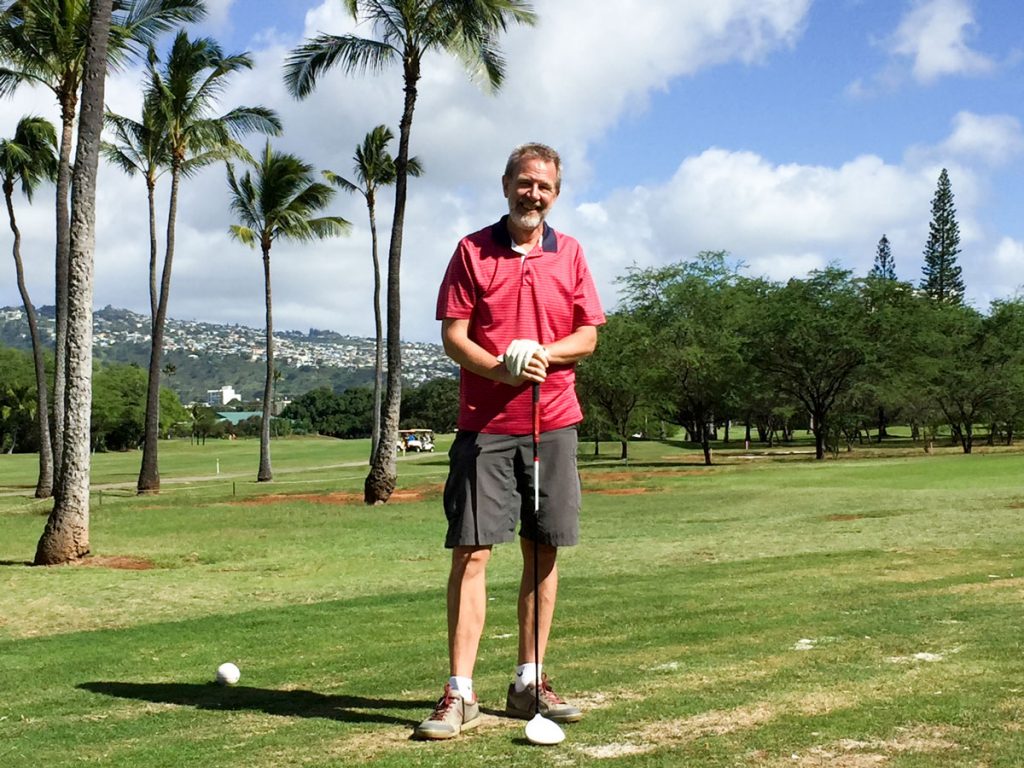 When we got back to the hotel, Sue, Alex, and Max were just back from 3 hours at the beach. Good times! Happy hour. And for supper, Tim and Alex went out to a nice restaurant while Sue and I ‘babysat’ Max. We went back to the McDonalds right next to our hotel and brought back our ‘happy meals’ to eat in our room. We’d just put Max to bed when the kids returned from their ‘date’.

We took the ‘Pink Line’ hotel shuttle bus down to Denny’s for our breakfast this morning. The highlight should have been the ‘grand slam’ breakfast, but today it was the ‘Rudolph the Red-nosed Reindeer’ kid’s special pancake breakfast, complete with chocolate milk in a ‘Rudolph’ cup. And Rudolph ears and antlers for Max. And a Rudoph red plastic nose (that didn’t fit Max’s cute little nose, but clamped onto my schnoz no problem!)

After breakfast we went across the street to visit the Halekulani Hotel, one of the most impressive 5-star hotels on the strip. Sue, Alex, and I stayed there in 1992, when a ‘travel agent discount’ put it in our price range. Not anymore! Sue and Alex continued scouting out expensive hotels and shops in the area while the boys headed back to the hotel.

Just before 4 o’clock we all headed down to the pickup spot to get on a bus which would take us to the “Chief’s Luau”. The bus ride was about 45 minutes, and took us past Diamond Head all the way to Sea Life Park. We waited while about 10 other busloads unloaded, and then filed into the Luau area and found our table. Turned out our ‘cheap’ ($100US) tickets got us almost as close to the stage as the high-end (purple wrist bands instead of our goldenrod ones) $172 tickets. But we only got ONE free mai tai, while the deluxers got three. We were encouraged to walk around and look at some ‘local’ crafts and trinkets before we were called by table to file by the buffet. Same paper plates and plastic cutlery for all levels of tickets here. And the ceremonial roasted pig had now been turned into warming trays of something that looked like pulled-pork in gravy, or chicken pieces in gravy, or cooked fish in gravy. 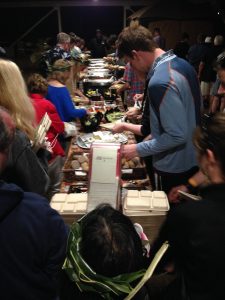 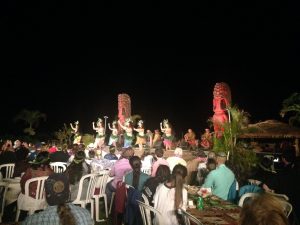 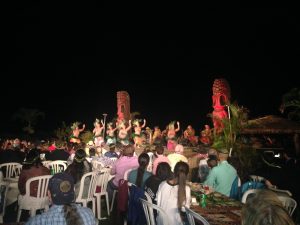 After we’d had our dinner it was time for the show. The chief is a large Samoan man. He spent the next couple of hours encouraging us to give a loud yell and applaud anyone and everyone who’d had a birthday or anniversary in the last few years. And he called said people to the stage, and asked them their name and where they came from. And between the crowd’s cheers and chief’s interviews assorted costumed dancers came on the stage and demonstrated their skills. It seemed to go on a quite a bit too long, and it was all we could do to keep Max awake so he’d see the highlight of the whole evening, the ‘fire dancers’. But he persevered, and so did we. And the finale was nearly worth the wait. Ironically, just when the big chief finally started his fire by rubbing sticks together, the skies opened and showered us with a misty rain! But the dancers carried on despite the mini-shower. And as soon as it started it was over. And so was the show, and we were all herded back to our respective buses. Max was fast asleep on his parents’ lap, and couldn’t even be roused enough to change out of his dinosaur t-shirt into his dinosaur pajamas. Happy and exhausted. Another day in paradise.

Tim was going on a helicopter ride. He was picked up at 9:50, but returned to the room at 1pm. The ride was postponed to January 2, due to President Obama flying out of the airport. It was a cloudy day, so he probably wouldn’t have had as good a view as he might have anyway.
Sue spent an hour and a half on the phone, trying to negotiate a partial refund with Expedia. We took the ‘Pink Line’ shuttle to Ala Moana Shopping Center. We ate in the food court – it was so crowded and busy with Japanese tourists that it felt like we might as well be in Tokyo.

Sue and Alex went for a long walk along the canal while the boys played with Max. For supper we went to the California Pizza Kitchen on Kalakaua. A highlight for me was taking Max to watch the live band playing in the shopping center courtyard – and watching Max watch the drummer. He seems to have an excellent sense of rhythm, and may well be a drummer himself one day. When we got back to the hotel we said our farewells to Tim, Alex, and Max. We’ll be getting up early tomorrow morning, before they wake up, heading to the airport and the next leg of our winter adventure. We’ll surely miss them. They will spend another week here in Waikiki before heading back home to the cold white north. 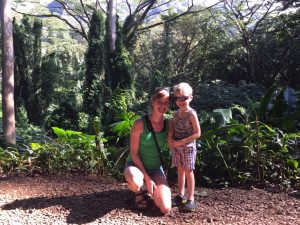 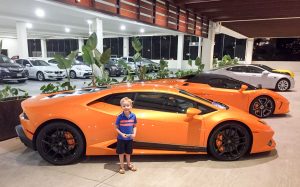 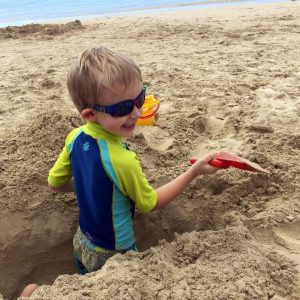 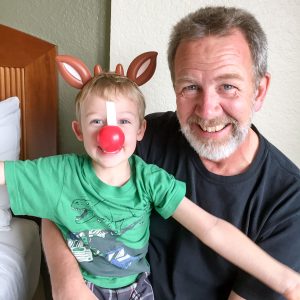 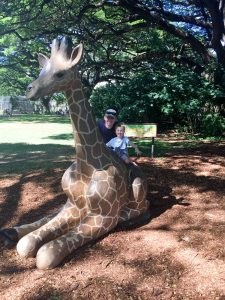 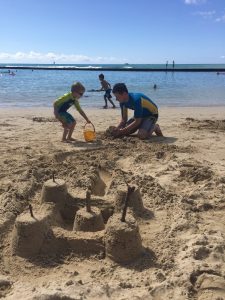 As good as it gets: sand castles on the beach in Waikiki. 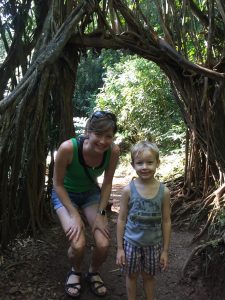 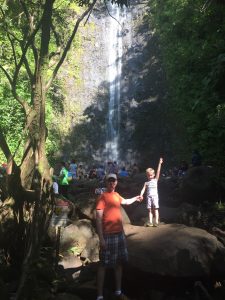 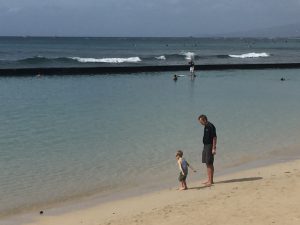 Max and Opa check out the beach on our morning walk. 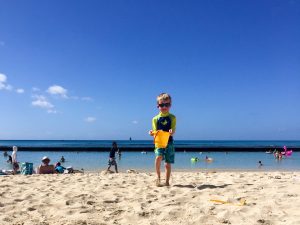 Fun times at the beach. 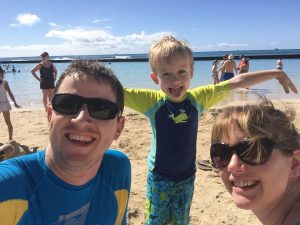 More fun at the beach. 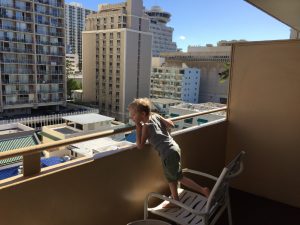 Checking out the view from the hotel room balcony.