A week ago Tim took us to the airport for the beginning of this month-long adventure. It’s been a great first week here in Paris.

After watching another couple of NFL games on my computer last night, I started watching the ‘evening’ game but soon gave up. I was too tired. It was already after 2:00am and I just didn’t care all that much about the Bears or the Steelers.

At 10:30 this morning I finally woke up. I made coffee and by lunch time it was time for breakfast! The day was warm and sunny and too good to waste — especially since at least 2 out Sue’s 5 weather apps are forecasting rain for later in the week. So we decided to go see the Eiffel Tower today. Not only that, but since the tower is quite far away and we would probably be doing a lot of walking once we got there, we decided to take the Metro there, then, if we were not too tired later, walk back home.

We took the Metro from the nearby Pigale station. We had to switch lines once, and then got off at the Bir-Hakeim station. From the station we could already see the tower. We walked across the street and up to the North leg of the tower and got in line to buy tickets — entrance tickets and an elevator ride to the top (14.50 Euros each). The line-up for the ticket booth took 45 minutes. The line-up for the elevator took another 45 minutes. We took some photos from the second level and then a few more from the very top. A great view. I exercised extreme restraint and only took about 50 photos. Here are some: 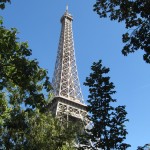 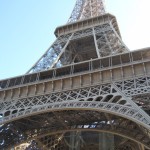 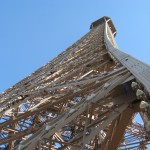 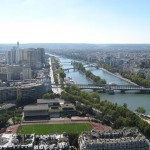 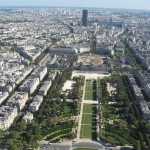 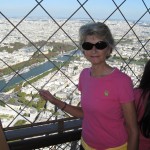 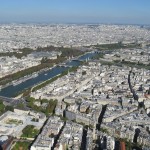 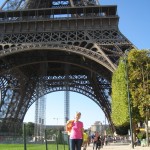 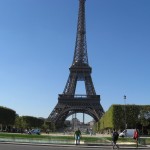 From the Eiffel Tower we wandered towards the Champ de Mars, the large expanse of lawns next to the tower. We stopped at a corner café and had a large beer and a ‘croque-monsieur’ (a French specialty, basically a grilled ham and cheese sandwich). It was getting close to 5:00pm, but the western sun was shining brightly and there’s nothing that’s much better than sitting at a busy street corner, drinking a big cold glass of beer, and watching beautiful people walking by!

And, in case I haven’t mentioned it before, although pretty much EVERY corner in Paris boasts a historically significant building or a museum or a statue or a fountain worthy of at least a photograph if not a paragraph in some idiot’s travel blog, Paris is a “people-watcher’s paradise”. Seriously! The women here are gorgeous! Almost all of them. Not just the French women (although especially them), but even the women tourists are better than average! They dress nice, they walk nice, the look fantastic. And there are WAY fewer overweight people here than at home (side note: most of them smoke, which may or may not help them to keep slim — just speculation on our part, though). And the men? Nothing special! Okay, maybe I have turned my head a few times when one of those French ‘gay boys’ with the pants that are tight all the way down to the ankles walked by, but mostly the men are old and frumpy-looking with messed-up comb-overs and bagged-out old suit jackets. But the women? Ooh-la-la!

Too bad they mostly speak French, a language that completely befuddles us. When it’s time to pay our cheque I just hold out a palm full of coins and hope the waiter or the clerk can figure it out. Of course, we could get with the times and have one of them fancy new iPhones with google translate on them — but THAT reminds me of another thing I’ve noticed on this trip. Of the 7,181,090,312 people currently on this earth, Apple must have sold 7,181,090,300 iPhones! No, that’s not right either — I was figuring that Sue and Rudy are about the only 2 people who do NOT have an iPhone, but then I remembered that quite a few people here have MORE THAN ONE! On the Metro, the guy in front of us is texting on one and facebooking and listening to music on the other one! So that cancels out us NOT having a phone. Maybe he “LIKED” himself from one phone to the other! But I digress.

Suitably refreshed we continued our walk. We visited ‘Les Invalides’, a large facade with a glistening gold-covered dome, which is now an army museum and the burial place for Napoleon Bonaparte. We took a few photos of the cannons inside and the finely trimmed trees in the front garden. 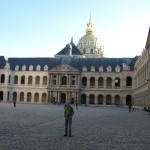 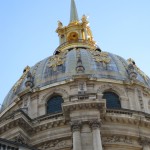 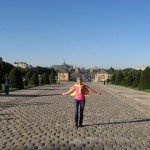 From there we walked across the Pont Alexandre III bridge — our guidebooks regard it as the most beautiful of all the bridges that span the Seine River. And on the other side we passed a couple of palaces: the Grand Palais and the Petit Palais. Click. Click. Ho-hum. 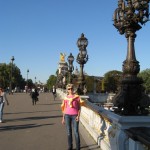 Allegorical sculptures adorn the Pont Alexandre III at either end of the bridge, with elaborate Art Nouveau style lamps along the way. 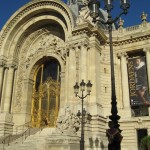 Le Petit Palace. (Sue in the shadows under the lamp post). The Petit Palais (Small Palace) is a museum. 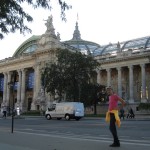 Sue next to the Grand Palais de Champs-Elyses, a large exhibition hall and museum. 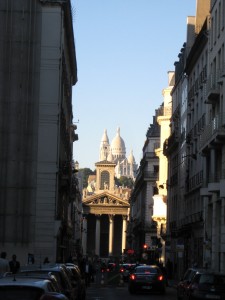 And then it’s just a hop, skip, and 3km walk back to our apartment. Once we hit Rue des Martyrs we can already look up the slope of the road and see the white dome of the Sacré-Cœur church up on the hill behind Montmartre.

Along the way I visit my first McDonalds, but only to take a look and compare it to the McDonalds back home. I took a photo of the chocolate display case and hurried back out!

We got home and had a little ‘happy hour’ and a shower before heading out for supper. Tonight we again went to one of the little cafes just around the corner — and I had a bacon-cheeseburger and Sue had smoked salmon. Both good. Back at the apartment, we watched a French (with subtitles) DVD, “My Best Friend”. Good too.

And that’s the end of week one! C’était une bonne semaine. (Okay, I cheated, and ‘googled’ that!)