This morning I woke up a bit before 8:00. I was surprised when I arrived at the corner bakery to pick up our breakfast — they were closed! Open every morning at 7am EXCEPT MARTES. Okay, I’ll make a note of that. That meant I had to go another block to find the next ‘patisserie’. Yeah, I could have bought our baguette at one of the several little mini-markets along the way, but once you get used to having FRESH bread that’s what you expect, and you’ll walk the extra block. Now I know that it might be tempting to have one of those new trendy allergies to wheat, water, or wine, but give Sue a minute or two in a little French bakery or at the neighbourhood wine shop and she’s feeling fit as a fiddle. So we again enjoyed a lovely pastry with our mug of coffee and platter of fresh fruit at breakfast.

After breakfast I had to haul out the washing machine manual for the new automatic washer in the kitchen so we could do a load of laundry. We’d already expected a European washer might take several hours to wash a single load, but after a bit of research we pushed enough buttons to get ours to whine like a Concorde jet taking off for only about an hour and a half. Sue hung up the wash on the racks in the spare bedroom and then made us lunch. Then it was time for today’s walk.

We considered taking the metro down to the Luxembourg Gardens but ultimately decided to take advantage of the lovely weather and walk there, with an option to take the metro back if we got too tired. So that’s what we did. It was warm and sunny and by the time we arrived at the bridge at the Seine River we were both pretty sure we wouldn’t be needing the extra jacket we each were carrying on this walk. But we still had a ways to go.

Once in the park we found a bench in the shade of big elm trees and took off our shoes and socks to cool off our poor feet. We sat there for about an hour. Then we took a walk around the park. There were lots of people there today — many of them sunning themselves in the warm afternoon sun.

After we left the park we decided to take advantage of where we were and wander by the Notre Dame Cathedral again — hoping that perhaps the lineup to tour the inside of the church would be reasonable during the week. We were there last Sunday but opted to forego the church tour because the wait would be too long. And so that’s what we did. The line was shorter and it moved quite quickly. Once inside the sanctuary, we did a quick ‘once around’ stopping to take a couple of photos of the large stained glass ‘rose’ windows that allow light in on three sides of the building. 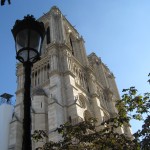 Notre Dame Cathedral — photo taken from a sidewalk near the western facade of the church. 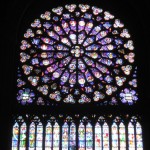 We also revisited the Notre Dame Cathedral — this time we stook in the line-up for about 15 minutes before entering the church. We didn’t take too much tim inside, but I managed to get a photo of the famouse ‘rose window’ that was installed in the early 1200’s. 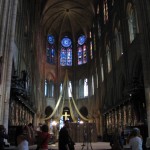 The inside of the Notre Dame Cathedral. 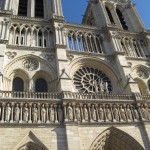 Another shot of the front facade of the Notre Dame — you can see the line of kings, the rose window, and the two towers.

We left and started the long hike back home. By the time we made a little grocery stop just around the corner from our place our feet were aching and we were too tired to think about going out for dinner tonight. We picked up a few things and went home. After a bit of a happy hour Sue got busy in the kitchen while I showered. We enjoyed a nice pasta with chorizo meal and then settled down to watch tonight’s feature presentation: “The Atomizer”. A bit of a weird movie but Sue filled me in on the parts I’d snoozed through. By 11pm we were yawning and ready to shut ‘er down.