…And I take no pleasure in the blood of bulls, lambs or goats. Isaiah 1:11

A cool Sunday morning in Merida. I made it downstairs just in time to see the beginning of my favourite Sunday morning show, CBS Sunday Morning. Today they celebrated the 40th anniversary of the show. I think I’ve watched it regularly for at least half of those years. By the time that show was over and the political talk shows started MaryLou was out the door on her way to the gym. Dave and I switched to watching a couple more episodes of Narcos Mexico. While we were so engaged, the rain started. And it rained. Hard. Steady. Prolonged. MaryLou was stranded at the gym. Our power went off several times but it always came back on again a moment later, often blinking off again just after we’d re-queued our show on Netflix on the TV.

Finally the rain slowed down enough for MaryLou to make a dash for home. After a quick bite to eat, we got our raincoats on and headed out the door. We took an Uber taxi to Ken and Kaaren’s, arriving there at 3:00. Snacks and drinks. Then a brisk walk on a very wet and rundown sidewalk to the Plaza de Toros, about a mile away. There were a few protesters holding big banners and posters standing at the corner. We followed the crowd to the entrance around the back of the round stadium. Ken had arranged tickets for all of us and soon we were through the gates and heading up the ramp. Our seats were slightly discounted because they were on the “sunny” side of the stadium. The sun was not very interested in seeing a bullfight today and for most of the event it stayed hidden behind the clouds.

The seats were basically painted numbers on the tiers that encircled the dirt ground of the stadium. Steep and VERY crammed together. We’d be cheering on the matadors “cheek to cheek”. For a short while I thought I might be lucky and have a bit of extra room when the 3 spaces next to me remained unoccupied up until 4:30. But no, just as the trumpets and drums started their opening fanfare, I lost the space beside me and a little bit more when 3 guys with tickets for those seats squeezed themselves between me and my neighbours. 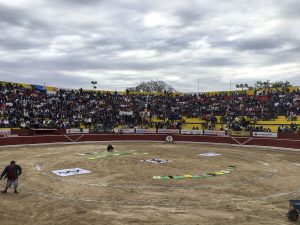 The floor of the stadium bowl was decorated with flowers and coloured paper — it was the 90th anniversary of the bullfighting ring in Merida. The sun came out for a minute or two just as the event was about to begin and was greeted by great applause from the crowd. And after about 20 dignitaries had had their photo taken at centre ice (okay, centre dirt), the first bull was introduced by a guy carrying a big poster with the bull’s name and weight and other important info on it. The two main matadors were introduced; each would get to fight 3 bulls. Each matador had 3 ‘assistant’, or junior matadors on his ‘team’. 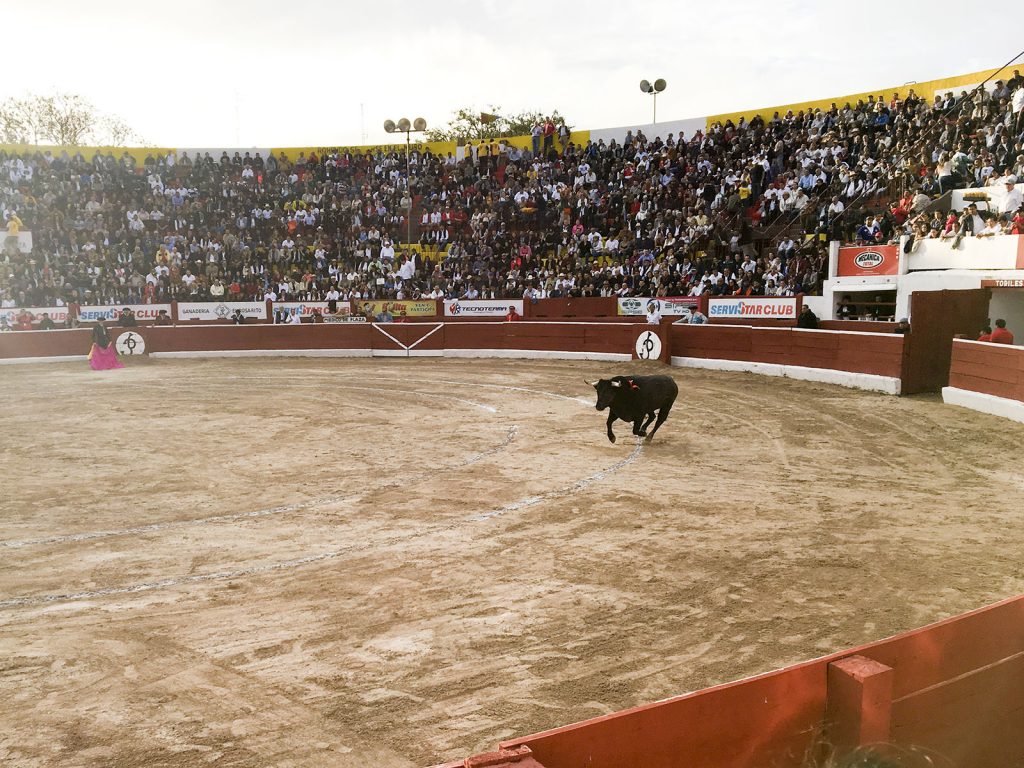 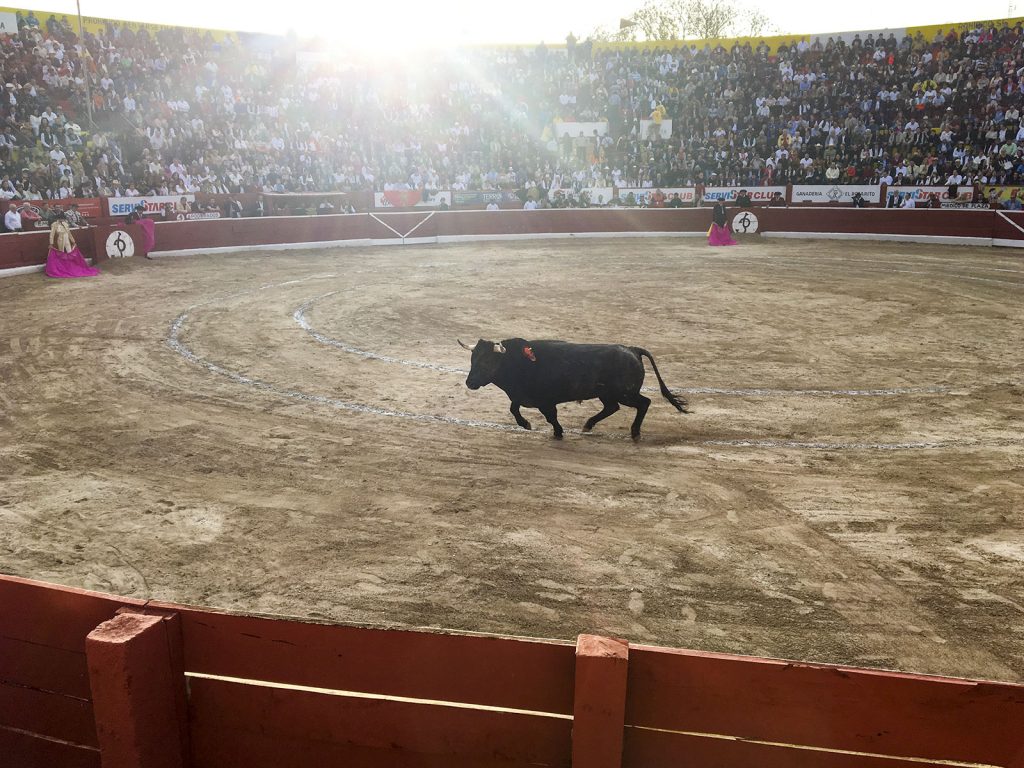 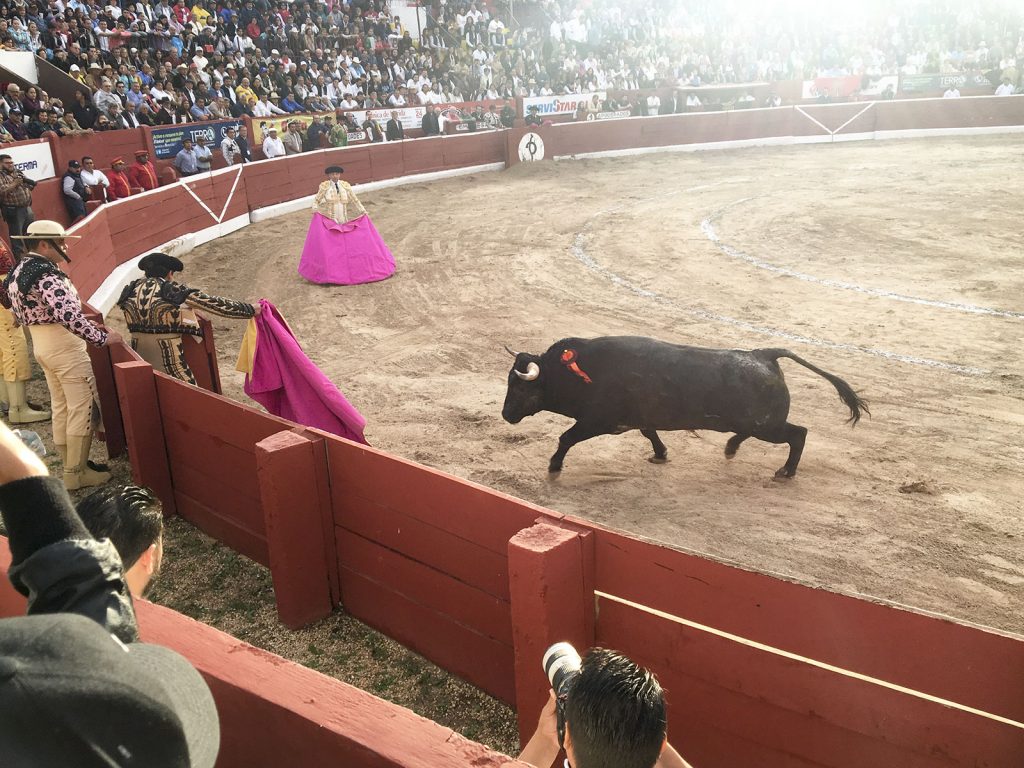 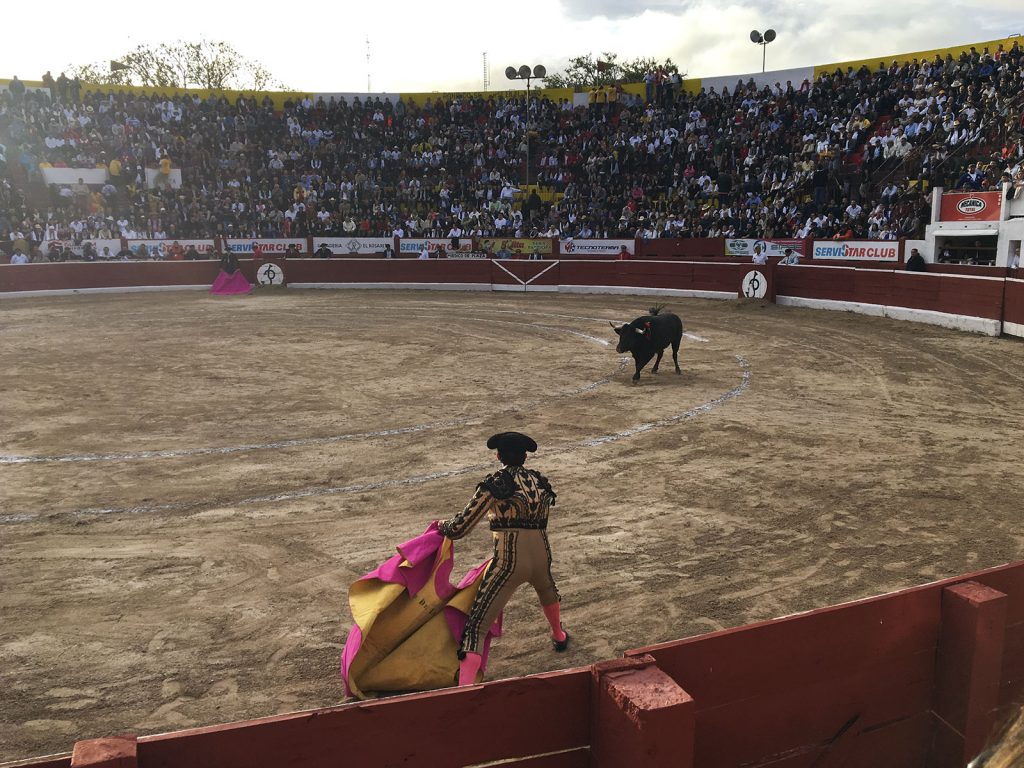 And then the big gate opened and the first bull came charging out into the arena. He put his head down and ran at each of the ‘stations’ located around the circumference of the arena. Behind the stations were three ‘assistant’ matadors, who came out and teased the bull into charging at them but then quickly ran and hid behind the protective wall that marked their ‘station’. After the bull had run at each man in the ring, two guys on horseback came riding into the ring. They were the picadores and they each had a big lance. The horses had heavy padded protection. The bull was goaded into charging at the horse, and when he did, the picadore jammed his lance into the top of the bull’s neck. This injured the bull and made him even madder. Then the three ‘assistant’ matadors each tried to plant two banderillas, sharp barbed sticks, into the bull’s shoulders. That wounded the bull and made him more angry. The main matador then did his ‘dance’, with the bull charging at his red cape which the matador waved and swung around to anger the bull. Finally the bleeding animal was put out of its misery when the matador rammed his steel sword into the top of the neck and down into the heart of the bull. The huge animal either sank to the ground or toppled over, dead. 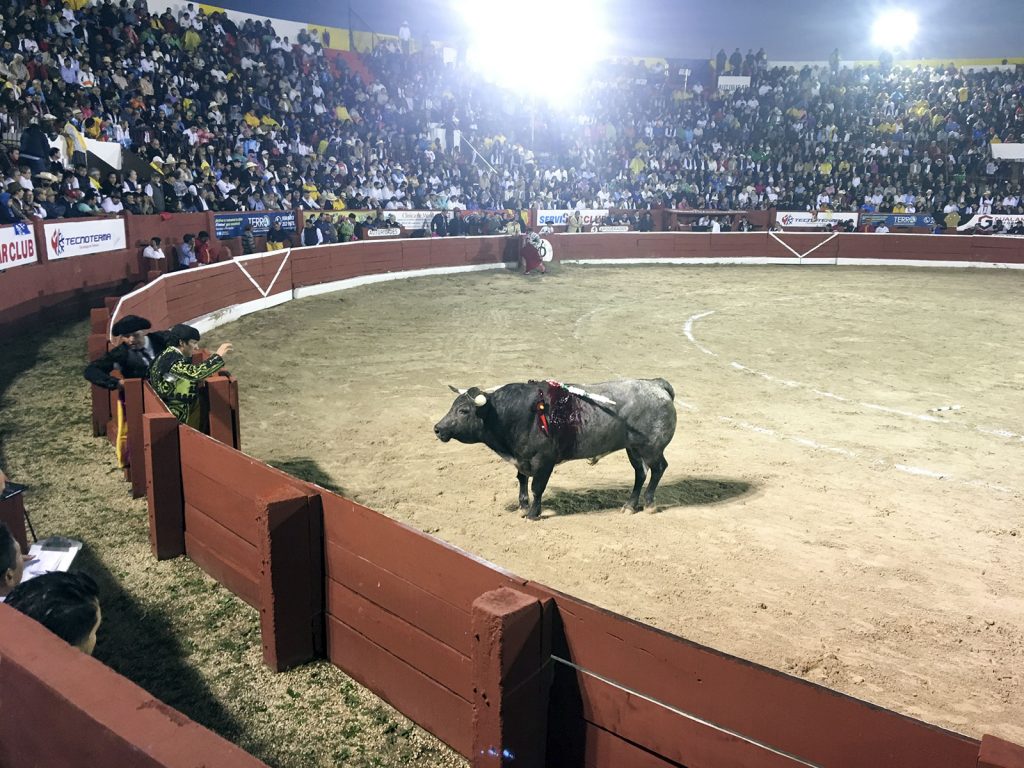 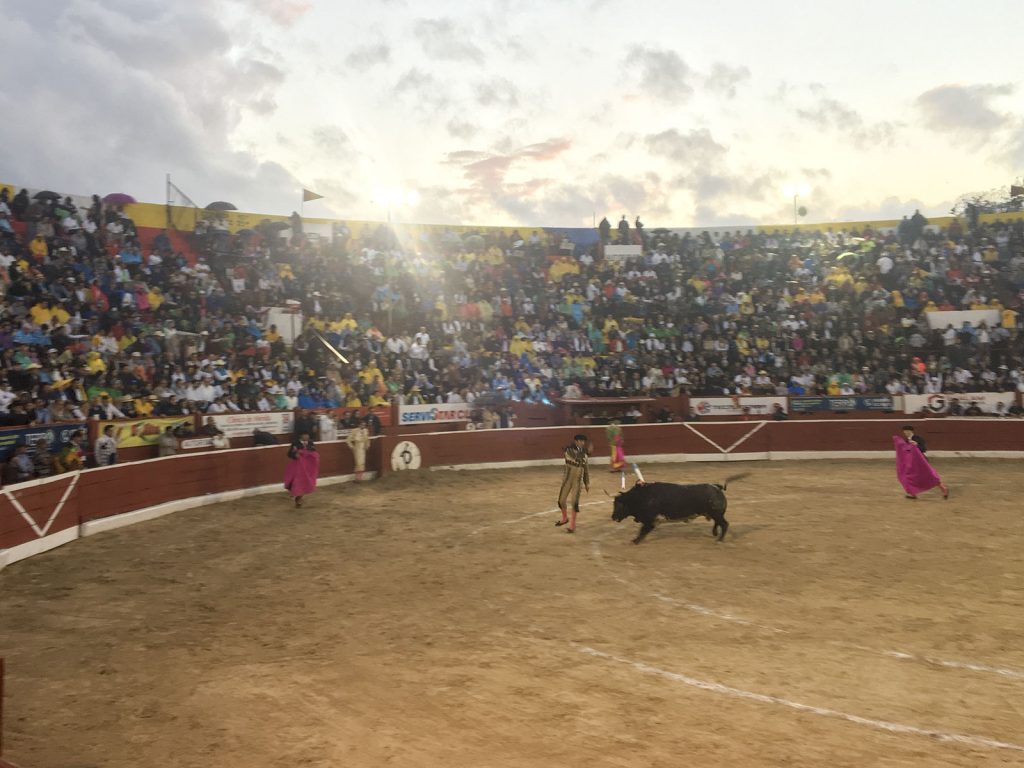 That’s how ONE of the matches ended, with a quick death to the bull at the end of the ’round’. The rest of them were less ‘clean’ and the team needed more than one quick stab to get the bull to capitulate. Then two horses with a small cart were brought in to haul the dead bull out of the arena. A crew of sweepers and shovelers came in and scraped the ice (oops, I mean they swept the sand and dirt) and a guy with a pail filled with white chalk re-painted the concentric circles on the ground, and the whole affair began again. 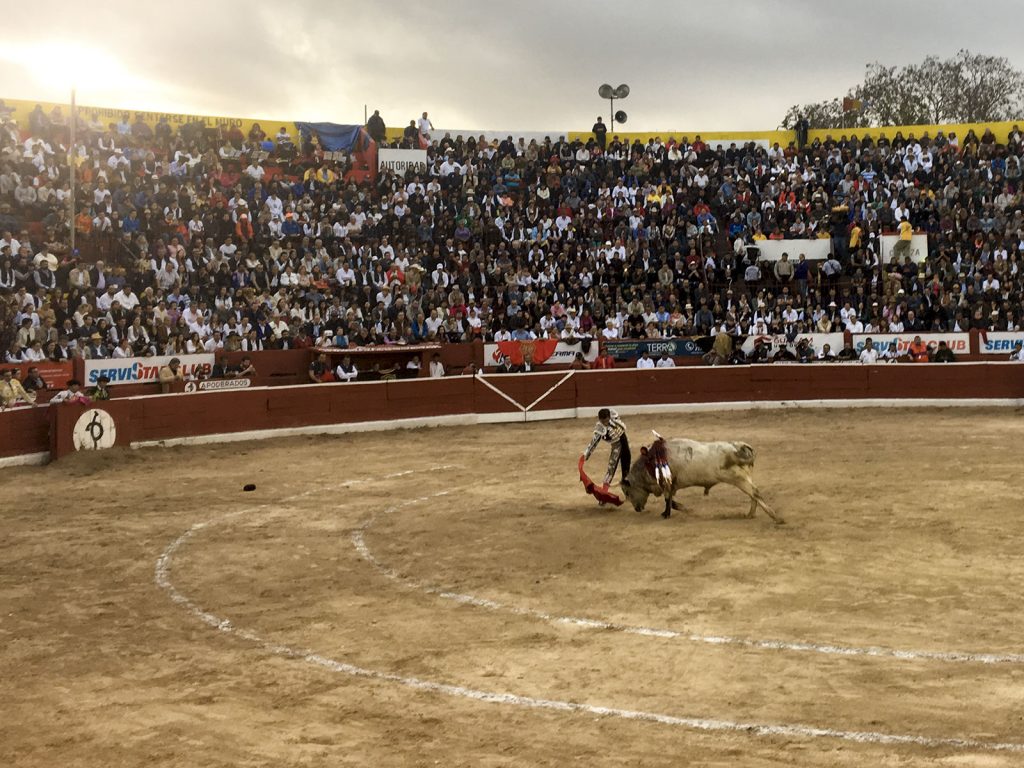 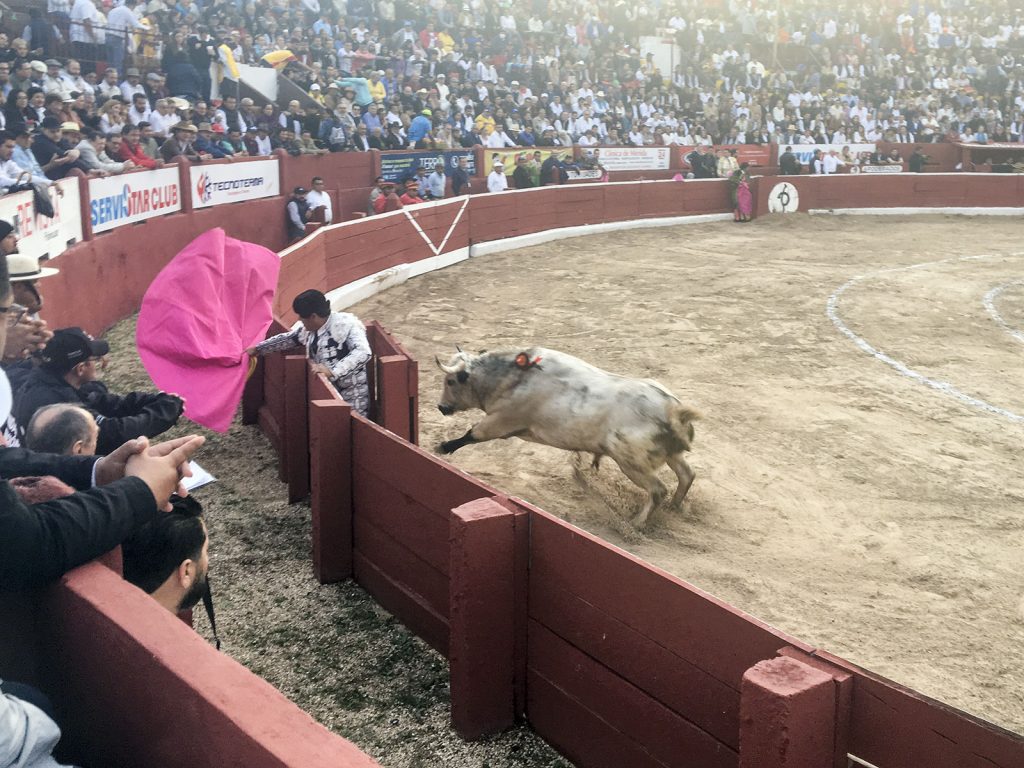 It was, of course, mostly a big ceremonial dance in which the matador preened around the ring, swishing his red cape at the bull, coaxing “olés” from the audience, while the angry wounded bleeding bull slowly tired and finally collapsed and died. All the odds were stacked against the bull. In the first fight the bull actually tripped up one of the ‘assistants’ and pinned and gored him against the wall of the ring. The injured man was quickly helped out of the ring and taken away. (I think he came back near the end, watching from the sidelines with a big white bandage over his nose.) But otherwise, it was really no contest. Whenever the ‘maestro’ or main matador tired a bit, his assistant matadors rushed in to distract the bull and give the main man a little break. 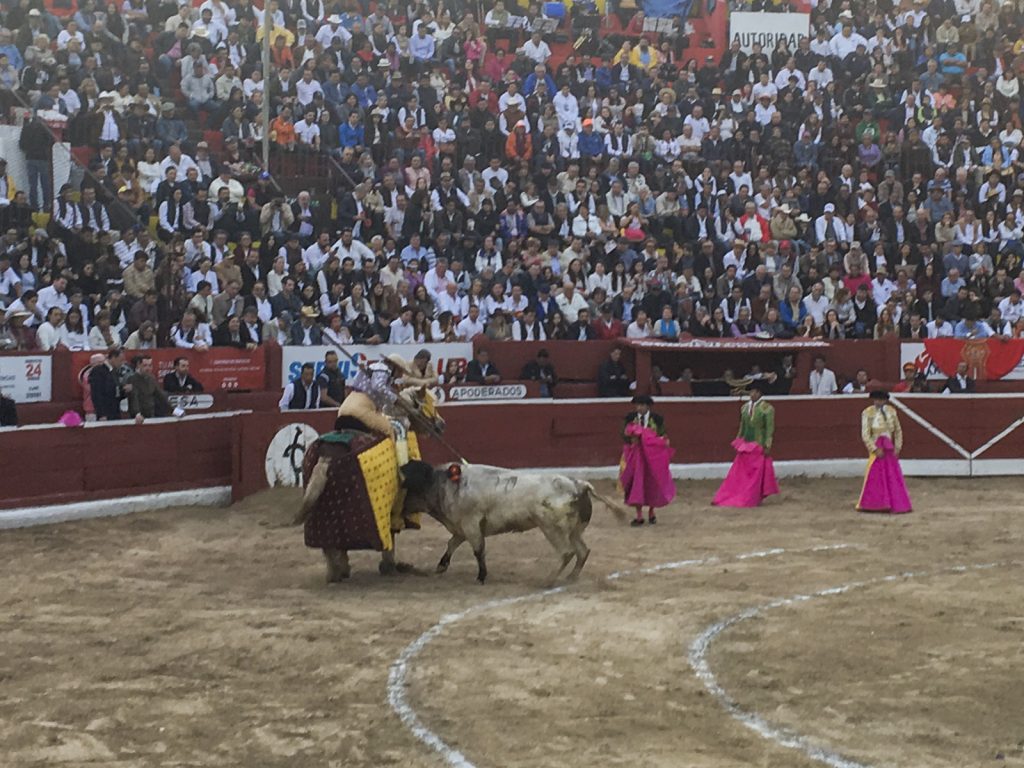 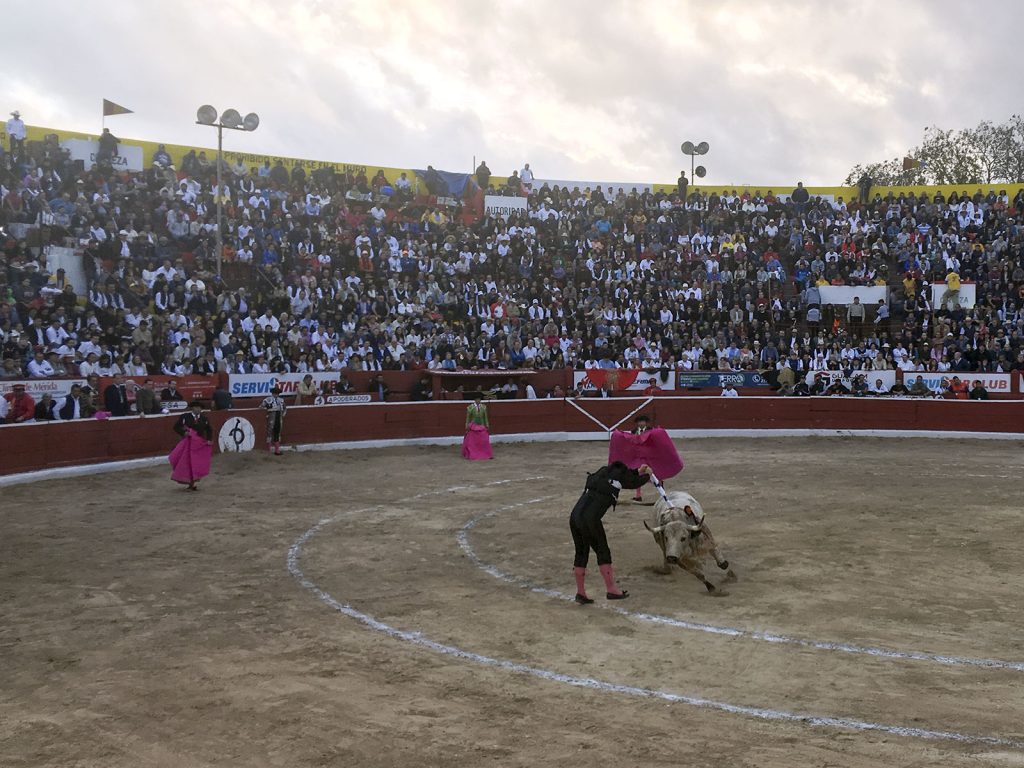 It was interesting to watch the ‘fans’. They got very quiet and ‘respectful’, shushing the talkers when the ‘sacred’ final stab of death to the bull was about to take place. But they also booed and whistled when the matador ‘missed’ the mark and merely wounded the animal, and more swords had to be brought in to finally finish the bull off. The two guys who were squeezed in next to me could speak English and were happy to answer my questions and explain what was going on when I asked them for clarification.

A little rain fell in between two of the matches, which also elicited a boo from the crowd as they all scrambled to put on their rain jackets or plastic ponchos. But it went as fast as it came just in time for the next fight. After witnessing four of the six fights we’d seen enough. We carefully negotiated our way out, trying our best not to step or fall on people as we worked our way to the exit. By then it was dark outside. We walked home, stopping for a bathroom break at the Neufelds’ before continuing on to a restaurant near the Santa Lucia square.

“Chaya Maya” was a restaurant that my neighbour Pepe had highly recommended. We got a table and ordered our meals. Not bad. We discussed the evening’s “entertainment” before planning our day for tomorrow. The ladies were disgusted by the bullfight. The men less so, but agreed that now that they’d seen one bullfight they really wouldn’t have to see another one.

We said goodnight — and arranged that Ken will be at our place tomorrow before noon and we’ll go golfing — and then the Driedgers and I got an Uber and headed back towards home. We asked to stop at the big Costco, but when we got there it was closed. So where might we find a store that sold wine and beer? How about the big Liverpool store in the Galerías Mérida mall? Yes. We found the ‘spirits’ department on the second floor of the big Liverpool department store and were about to select a few bottles when a clerk came and informed us that in Merida there is a law that no liquor can be sold after 5pm on Sunday. And that was that! We ordered another Uber and got a ride home.

Dave and I watched one more episode of Narcos before going upstairs to bed.