Well, if the weather forecasts are right, today just MIGHT be our last golf game here in the Algarve. The golf courses are all hoping for some rain — it’s been unusually dry here this winter and the fairways are looking a little brown. But for tourists like us, the weather has been great for golfing, and we’re hoping for one more rain-free day after today.

Dave and I drove to the Santo Antonio course for our 9:50 tee time. We both think this is the best course of the three we’ve golfed, and unlike Espiche and BoaVista, it’s just not very busy here and we always get on right away and golf as a twosome. 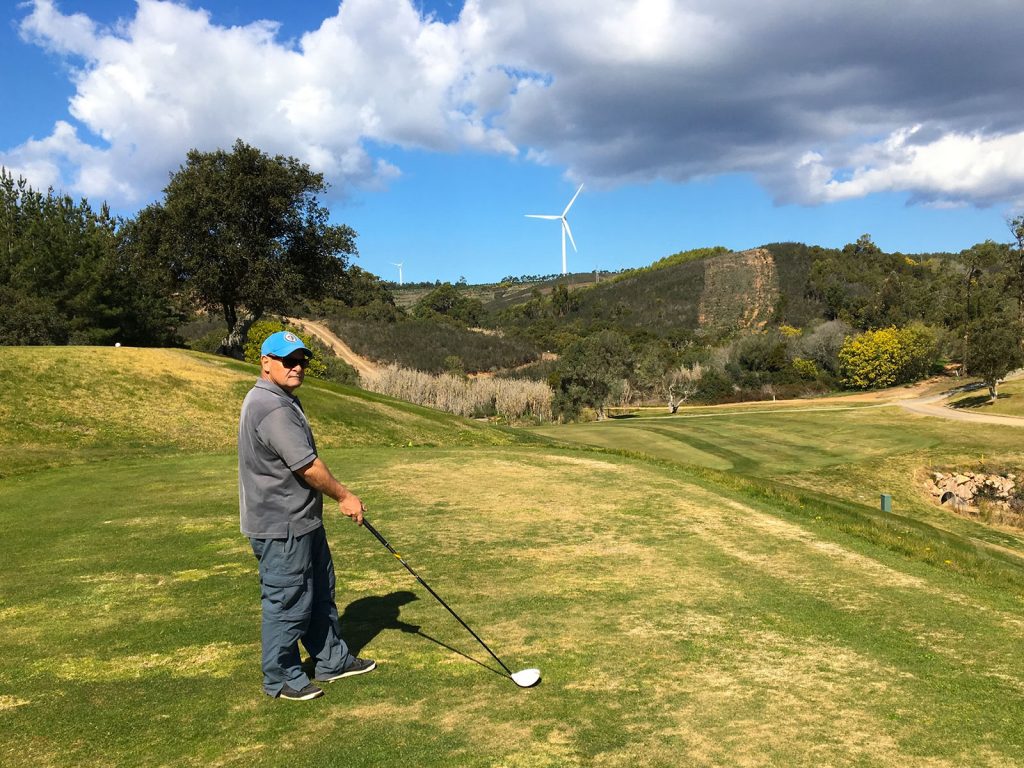 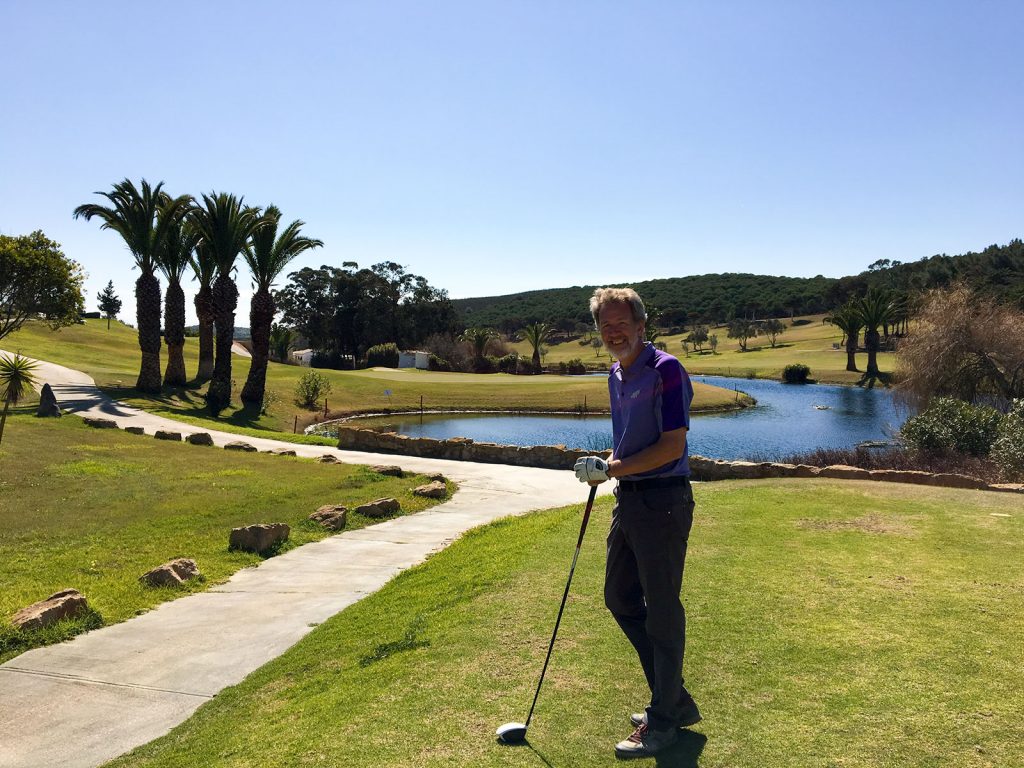 I know you are all wondering how my tee shot on the first hole went this morning, but I’m afraid my game isn’t any better than the Canadian hockey and curling teams’ games were in the Olympics. You’d think that Dave’s rule that we can have 2 tee shots on the first hole would be of some benefit to me, but it only means that I get to lose TWO balls right off the bat. And so, gentle reader, I will NOT bore you with the hole-by-hole analysis of my game today — no, let it suffice to say that I finished with a score of 100, and that’s not the same as 100 PER CENT. But the large cold beverage that awaited us at the 19th hole was as delicious as ever.

We got back to the apartment at around 1:30, and Dave fried up some hot dogs for our lunch (already a ‘red-letter’ day!). MaryLou took off just about as soon as we got home — I think by now she’s more efficient working on her eight daily tasks WITHOUT listening to Dave’s full-volume highlights of the Jets game and the Colbert Report on the computer.

I doddled around a bit, and then at around 4pm I put on my walking shorts and went for a quick bit of exercise. I stopped on the promenade and found a couple of size 5 t-shirts with ‘PORTUGAL’ on them, and ‘negotiated’ with the old woman who said she “really needed the money” until we both felt we’d been ripped off. I stuffed the bag with the t-shirts into my ‘poofy vest’ pocket and continued on my hike. I didn’t want to be gone for much more than an hour (and miss happy hour!) so my plan was to run up our hill to the big obelisk at the top — twice. That would get my heart pumping and my shirt sweaty and make me feel better about eating those hotdogs for lunch.

Along the way I pondered some more on those interesting chimneys on top of most of the buildings here in the Algarve. MaryLou had ‘googled’ it this morning and learned that they are unique to this region. They are called ‘Algarve chimneys’, and although they look like they might be a reminder of the Arab influence on this region, they are not ‘Moorish’ at all. No one really knows who designed the first one and why they continue to be so popular here. It turns out that they are mostly decorative, and not functional at all. I took a few photos on my way up and will post them here for your enjoyment. 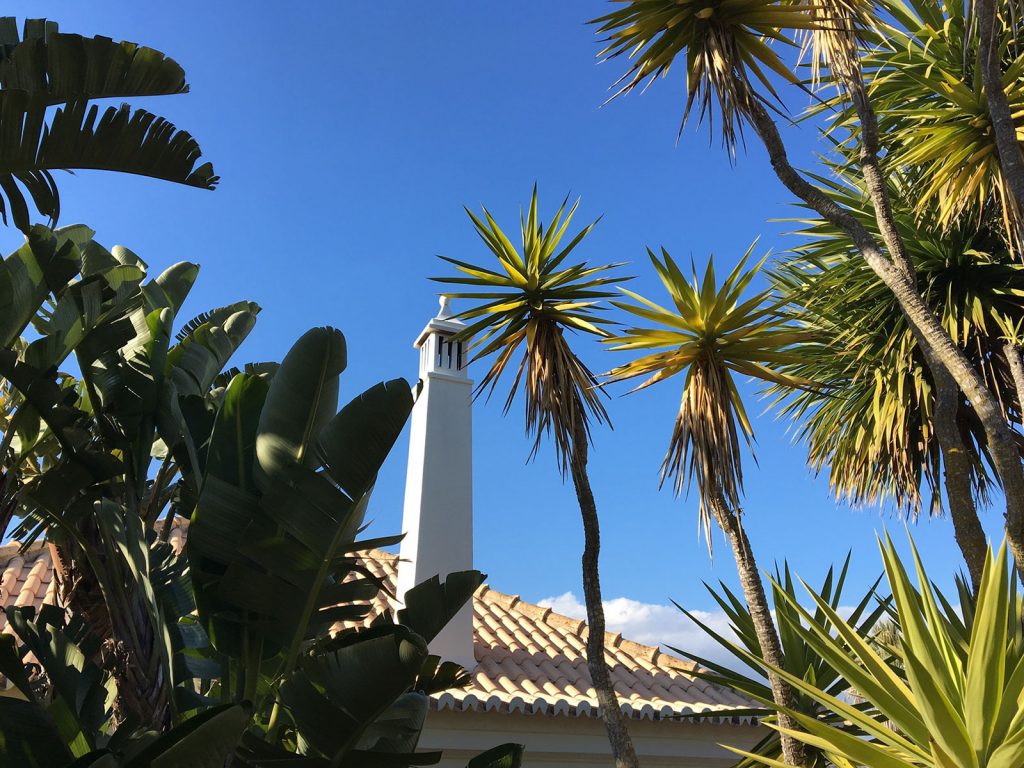 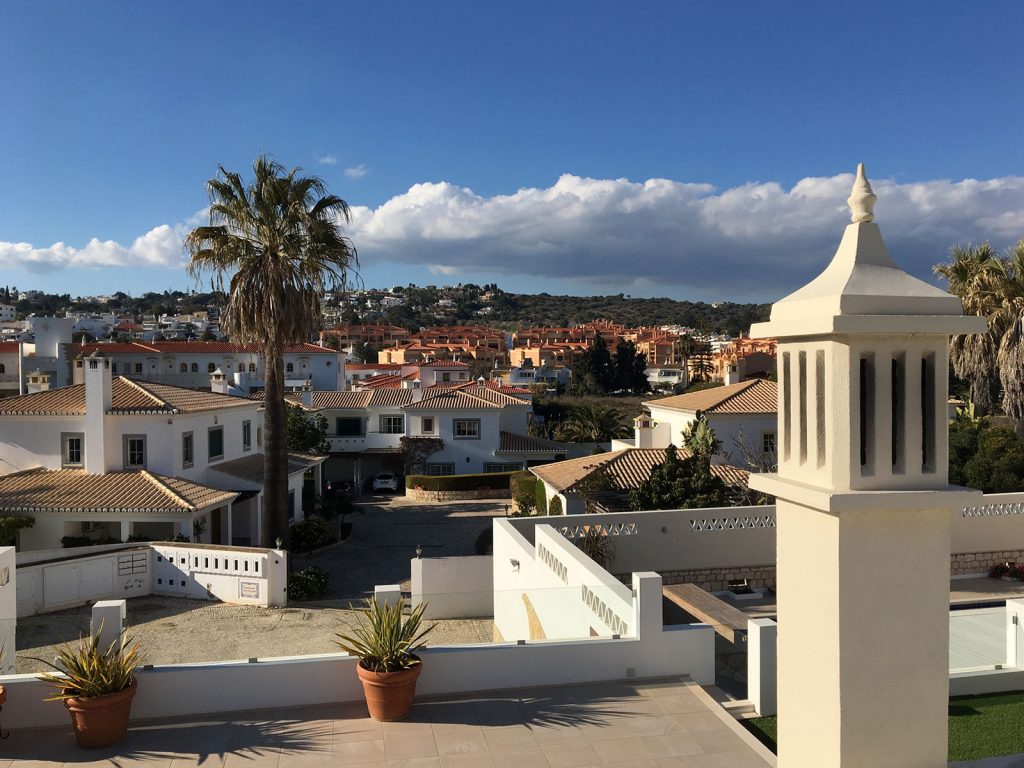 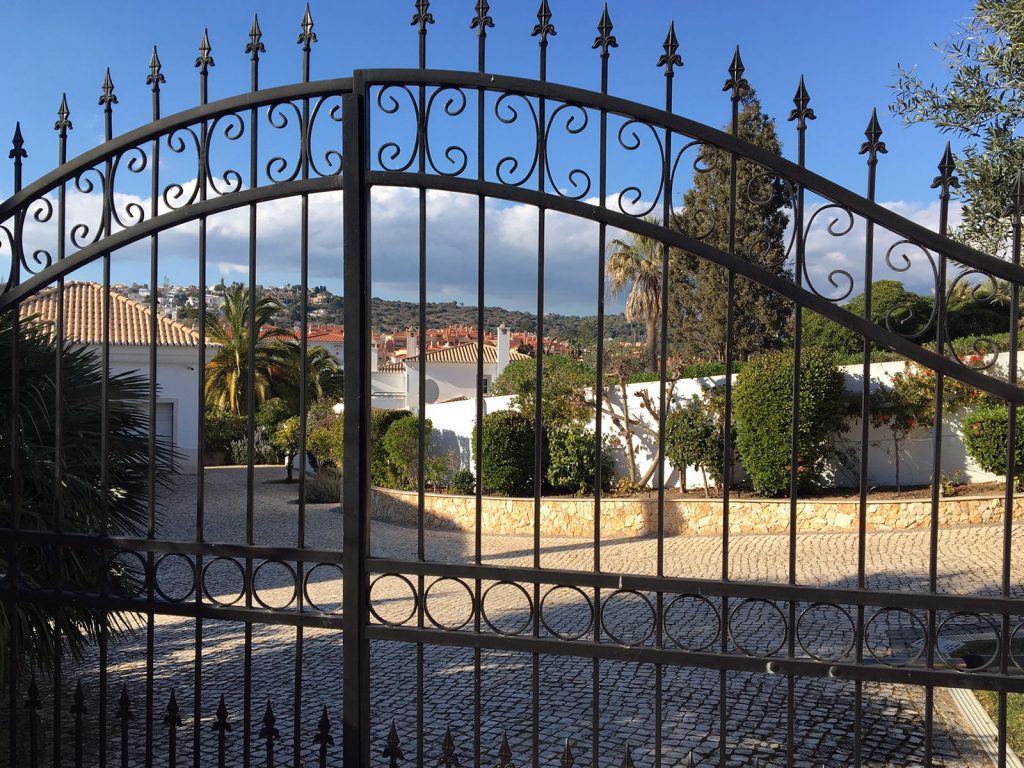 Speaking of posting photos, I’ve uploaded a couple of pictures I took the big obelisk at the top of the hill. After running (well, if not running, at least climbing as fast as I could) up and down the hill twice, I sat down in the shade of said obelisk to catch my breath and give my heart rate a chance to return to normal. There was an elderly couple already perched on the ledge at the base of the obelisk. We began a short conversation — they told me they’d been coming to this place since 2001, and marvelled at how things had changed since then. I could hear by the woman’s accent that she was German. The husband didn’t speak English, so she would translate some of our conversation to him. Then at one point I answered one of his questions directly, in German. Oh ho! Der kann auch Deutsch sprechen? He asked me from which part of England I was from. I corrected him: Nicht von England, but from Kanada, wo es sehr kallt ist. And so I had to explain why it was that I could speak German (and not French). And then it was time to say ‘Auf wiedersehn’ and run back down the hill or for sure I’d be late for happy hour. 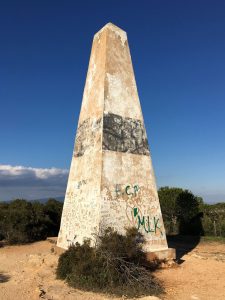 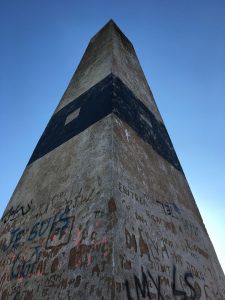 I got home just before Dave got back from the grocery store — with the fixings for G&Ts. After cooling off a bit and a quick shower — and snapping a few pics from my bedroom window of the sun setting in the west — we sat in the living room and waited for the clock to reach 7:13, the agreed upon time for going downstairs for pizza. Dave had a short snooze and I looked at my photos (and a few of Max diving into the pool at the C’mon Inn in Grand Forks, which Alex sent me).

There are actually TWO pizza restaurants on the main floor of our building. Side by side. Which one should we go to? We chose the first one, the one where the woman inside always smiles at us whenever we walk by. We sat down at a table and the pizza maker guy comes over to take our order. We order a litre of sangria (red), and two pizzas and one salad to share between the three of us. The Pizza Nazi doesn’t get it. “You want one special and two pieces? How many pieces do you want?” I seems he uses ‘pieces’ and ‘pizzas’ interchangeably. After a lengthy discussion the complicated order is sorted out and Mr Pizza gives us a final lesson in how to order ‘pieces’ the correct way for the next time we come here. He goes into the bar and starts squeezing fruits and crushing in ice cubes for our sangria. After a short wait the smiley woman brings us our two pizzas. She is very friendly and the rest of the meal is as pleasant as it is delicious.

Back upstairs the snooker semi-finals are on TV. MaryLou is soon snuggled up in her blankies; the excitement of the match on TV doesn’t keep her attention for long. Dave and I sit and watch for a while until we can stand it no longer — and it’s time for our nightly ‘Venetian’ ice cream dessert and a glass of port. The end of (another) perfect day. I nod off a few times before the best of eleven snooker match is decided — and finally drag my weary butt off to bed. My day is done and I am fast asleep by 10:30. For the first time since I started writing my daily entries, I conclude this day without a blog post. I’ll do it tomorrow. (I DID it tomorrow — and since both of my faithful readers are in another time zone they won’t even notice!)