I went to bed early last night, and I woke up late this morning. I made coffee and then sat down to catch up on my blog — I was too tired to do that last night. We had breakfast late — and then had to decide on a plan of action for the day. Should we go to the zoo? Or just hang around at home? What about the weather? Rain in the forecast? Well, we talked about it so long that it was almost irrelevant. But Dave found a cinema within driving distance that was showing just about ALL the movies that I still needed to see before the Academy Awards next Sunday, so that’s what we decided to do.

And then it was time for lunch! So we made sandwiches and had lunch. And MaryLou skyped with her dad. At 1:00 we finally left the apartment and took the 1 hour drive to the big fancy mall near Ferreiras, in the town of Guia. We parked the car and found the cinema. The mall is the largest we’ve seen so far, and of course the cinema turned out to be at the OTHER end from where we’d parked the car. And since Dave and MaryLou have seen all the movies that have been out for more than 3 days, we had to find something that they could watch while I watched ‘my’ movie where the start and end times would align. Not so easy. We finally decided that I would go see ‘Three Billboards Outside Ebbing, Missouri’ while the Driedgers would go see the cartoon ‘Ferdinand’. But when I went to buy my ticket the girls behind the counter informed us that Ferdinand would be in Portuguese only — after all, it’s a kids movie and kids can’t read subtitles. So the Driedgers decided they would go shopping in the mall for the next two and a half hours while I went to see my movie. Which I did.

One very unusual (and annoying) thing about movies in Portugal is that they insist on having intermissions about halfway through the movie. Literally, halfway through the movie! So there’s a very tense scene in my movie, with a operatic song and a guy running up the stairs to attack someone and BOOM, the film abruptly stops and the lights come up and the screen announces a 7-minute intermission. Just like that! 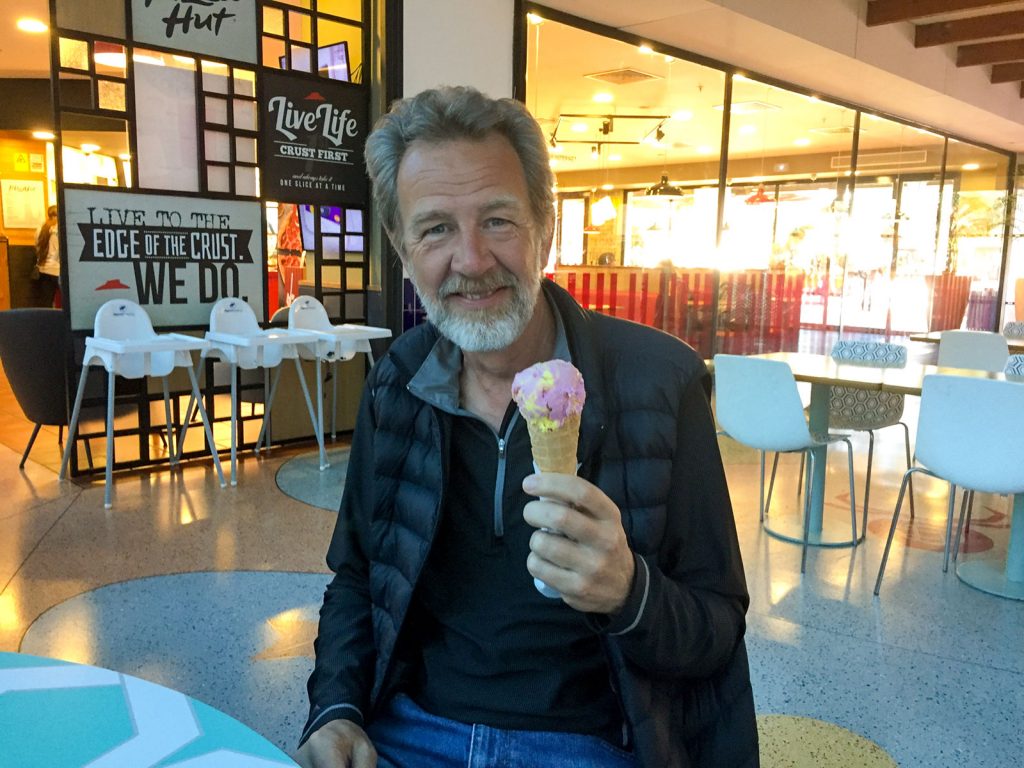 Marshmallow ice cream at the mall. 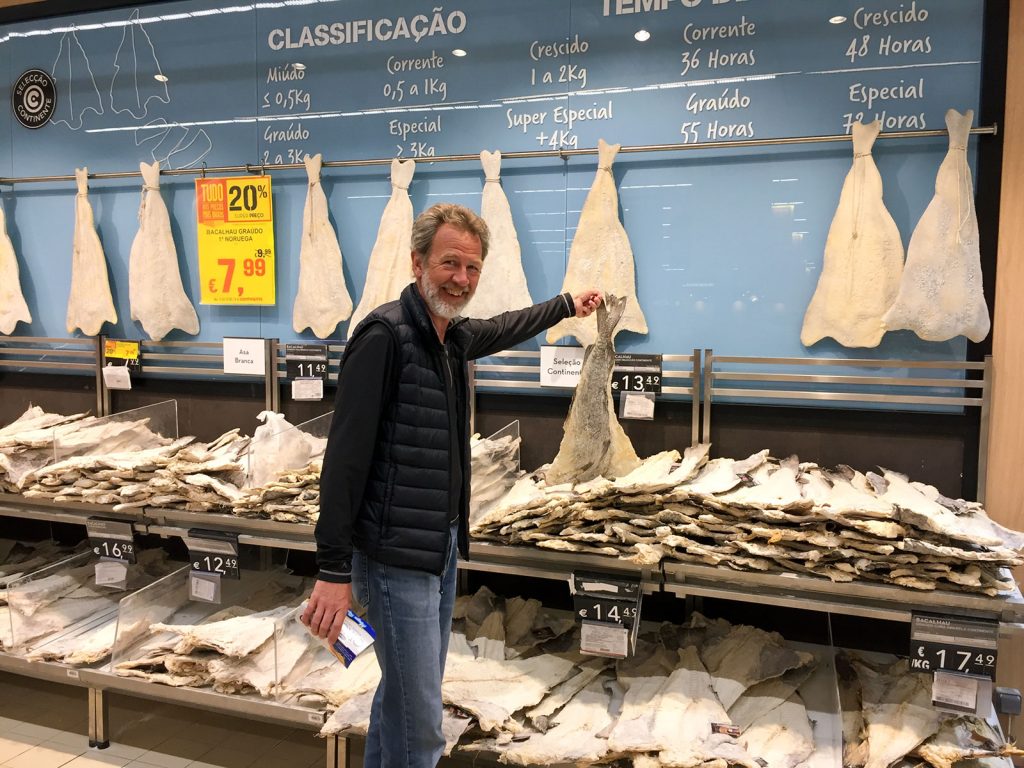 Salt cod which you can smell throughout the grocery store 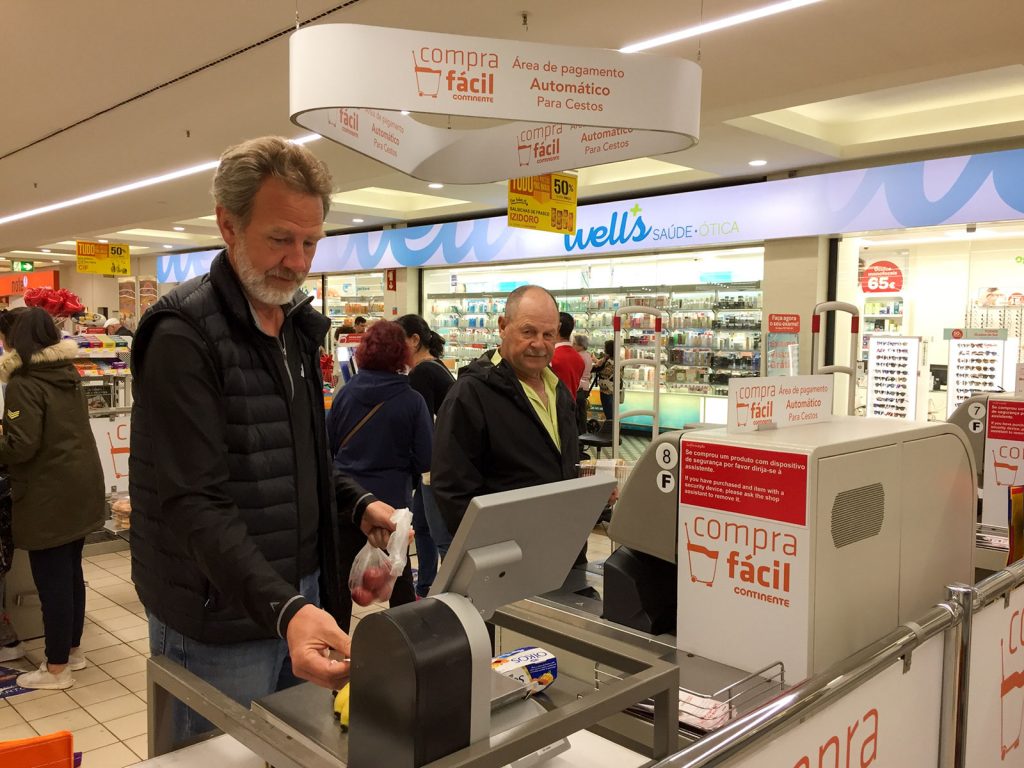 Self-checkout. How do you select ‘tomatoes’ from the Portuguese menu?

Anyway, the movie was entertaining and well-acted. I met the Driedgers sitting in some comfy chairs just outside the entrance. We went to get some ice cream cones from a shop in the food court nearby. And then we went downstairs and picked up some things we needed from the humungous grocery store on the first floor before Dave drove the car back to our apartment.

Happy hour when we got home. Dave and I watched the snooker finals. MaryLou worked on completing one of her eight daily tasks — today she worked on drawing a comic strip. And then she made a salad and Dave fried up the burgers we’d just bought and we had a late supper.

We were just finished eating when I got a FaceTime call from Alex and Max. They are at the C’mon Inn for a long weekend — and looked to be having a great time.

After supper we watched the final round of the Honda Classic golf tournament on TV. At ten o’clock it was time for a small glass of cherry liqueur and a dish of our fancy ice cream. And that was how we spent the twenty-fifth of February this year! The forecast for tomorrow says rain in the afternoon — so we just may have to switch our 2:20 tee time to the morning. I’ll let you know how it all turns out tomorrow. See you then.