He giveth power to the faint; and to them that have no might he increaseth strength. Isaiah 40:29

I woke up early. Then I turned over and went back to sleep. Then I woke up late. Eight-thirty. High time for our special Saturday morning breakfast. But first a coffee at our house. 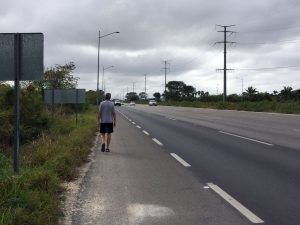 I’m getting a 30% discount on all my Uber bookings this weekend. I’m not sure I deserve it. We probably should have just called an Uber to take us to our breakfast place but we decided to walk instead. The sky was overcast. The temperature just right for a walk. But we old people all have foot problems and the walk was painful and painfully slow. But we got to see another side of life here in Merida — quaint little booths set up along the way, little ‘cantinas’ with plastic tables and chairs and folks eating fried chicken. At least that’s what I think they were eating. We walked on the shoulder of a very busy highway. 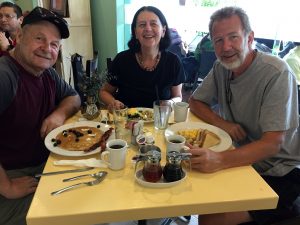 When we got to our destination — a breakfast restaurant and bakery called Los Benes — we were not disappointed. It is a very pretty restaurant and the food was great. The restaurant was full, with people lined up outside the door.

After breakfast we took an Uber taxi to a big new fancy mall that our golfing friends had told us about. The Driedgers had driven past the mall a few days ago and discovered that the road from the mall to our place was only a short distance down the highway from our place. So we advised our Uber driver where to turn, even though his phone map was telling him a different direction. And that’s how we managed to got a good tour of the jungle and the countryside near our place for no extra charge.

But eventually our driver managed to zigzag his way through the bush and got us to the mall. Yikes! what a mall! It is huge and brand new and very modern. I think Trump should start thinking about building a wall to keep out-of-work Americans from running across the Mexican border and starting a new life here in Merida! I’ve now visited several malls here and I don’t thank Winnipeg’s malls are anywhere CLOSE to the scale and the luxury that we’ve seen here.

Our first stop was at the Telcel phone store to see why not all our phones are working as they should. Turns out that MaryLou’s phone was out of data. So for a few bucks she topped it up.

MaryLou also managed to find a couple of 1000-piece puzzles that she and Kaaren can work on while the boys golf.

We checked out the cinema — matinees are about $3 and prime time tickets double that. There was a man-made lake behind the mall, with many mall restaurants looking out over the lake. Water-skiers were getting towed around the like by a ‘zip-line’ kind of deal.

We wandered around on our own for a while and then met at the pre-arranged time just before lunch. It was raining outside, a first for us! Pouring. Dave had bought a few Krispy Kreme donuts so we decided to sit down and enjoy them while we waited for the rain to stop. 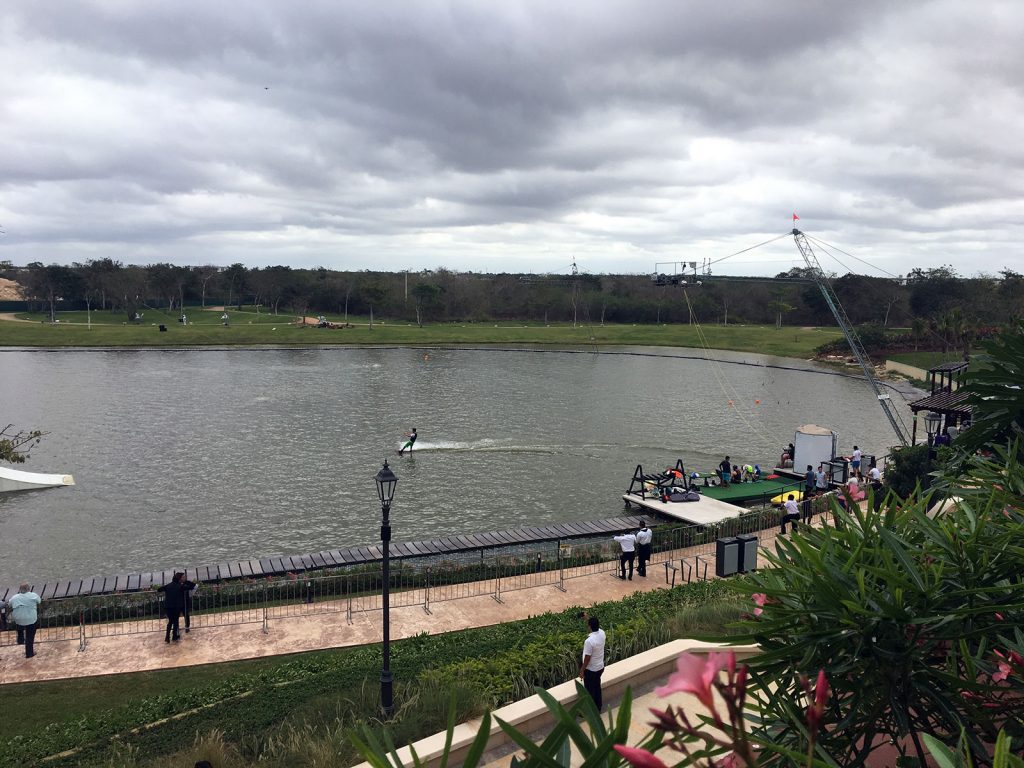 Water-skiers at the Mall 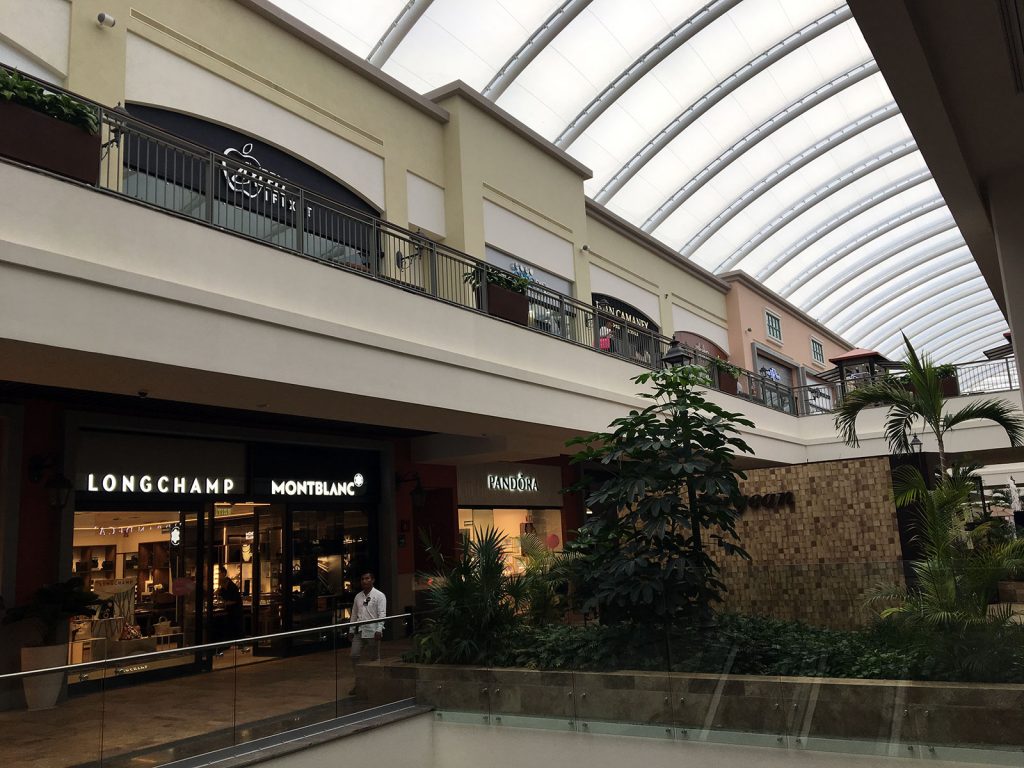 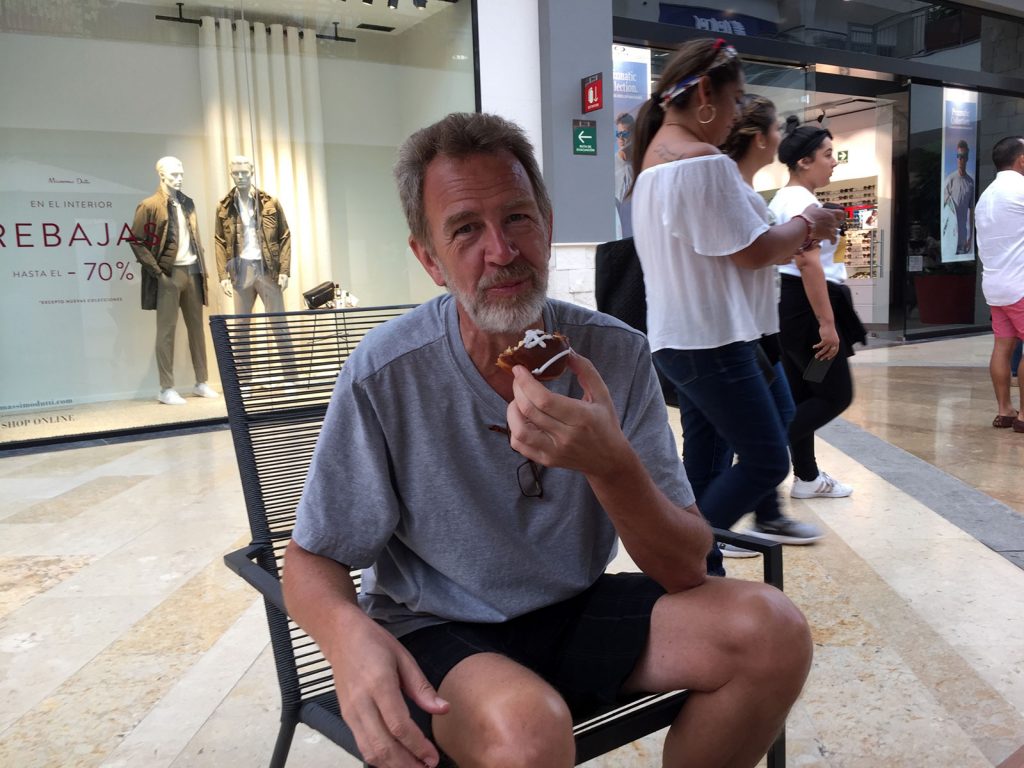 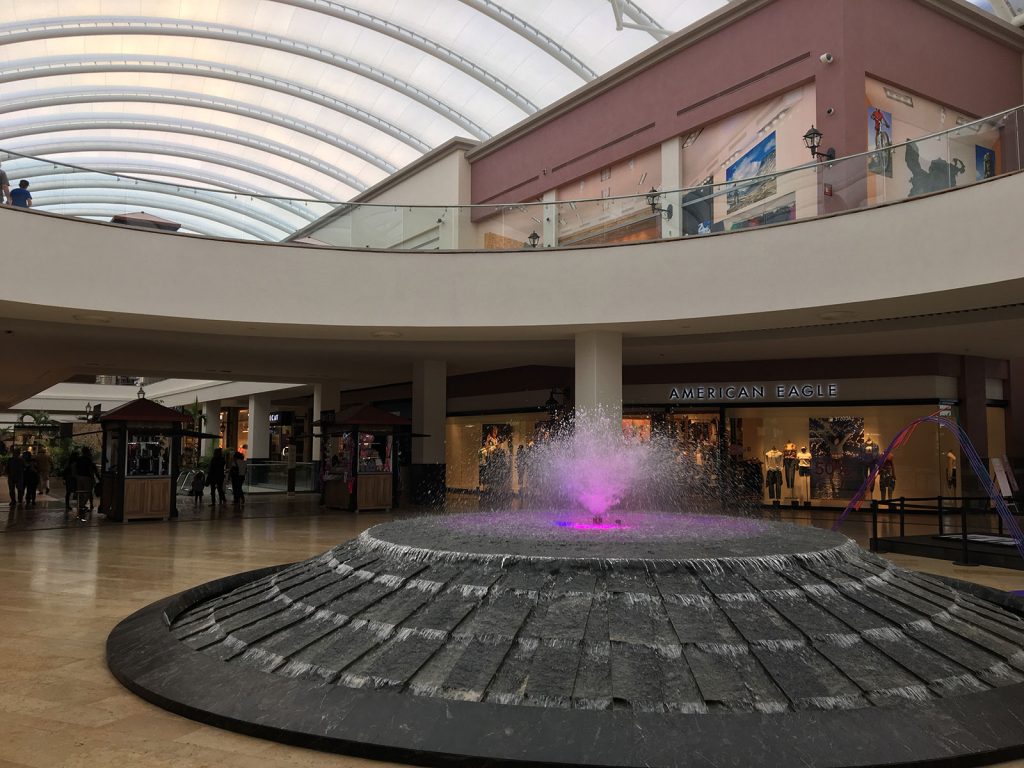 Fountain at one of the entrances to the New La Isla Merida Mall.

We got another (discounted) Uber back to our place. We got dropped off at the little super-minimart. We went into the store and bought a few supplies. When we got back to our house and opened the fridge to put away some of our groceries, we realized that our power was out.

When neighbour Pepe walked by I asked him about the power outage. Not at all uncommon. Every time it rains one or more old transformers break down because they get rainwater into them. I asked how long this might last. Oh, says Pepe, probably it will be repaired by around 7pm. The neighbours already had their portable gas generator going. At first it didn’t seem like such a big deal, but as the afternoon went on we began to think about supper options and how we might deal with a very dark evening.

What can we do? Can’t get on the internet. Our phones were all down to less than 50% battery life. So we sat around looking blankly at each other. No TV. No internet. Maybe soon “no lights”. That would make Dave’s plan to cook a big chilli supper quite a bit more challenging!

I read my Kindle for a while. We hadn’t planned to golf today, but eventually we realized the power would not be restored before early evening — and the cooler temperatures seemed to say we SHOULD golf this afternoon.

MaryLou joined us on the golf course. We played a quick nine-hole round. It was a fun time — not so good for our already-tired feet, but oh so good for poor bored gringos who don’t know what to do if they lose their internet and might actually have to talk directly to each other.

When MaryLou got back to the house after golf the power had just come back on. Great! She put the laundry in the dryer. Dave made gin and tonics. Our day was back on track. 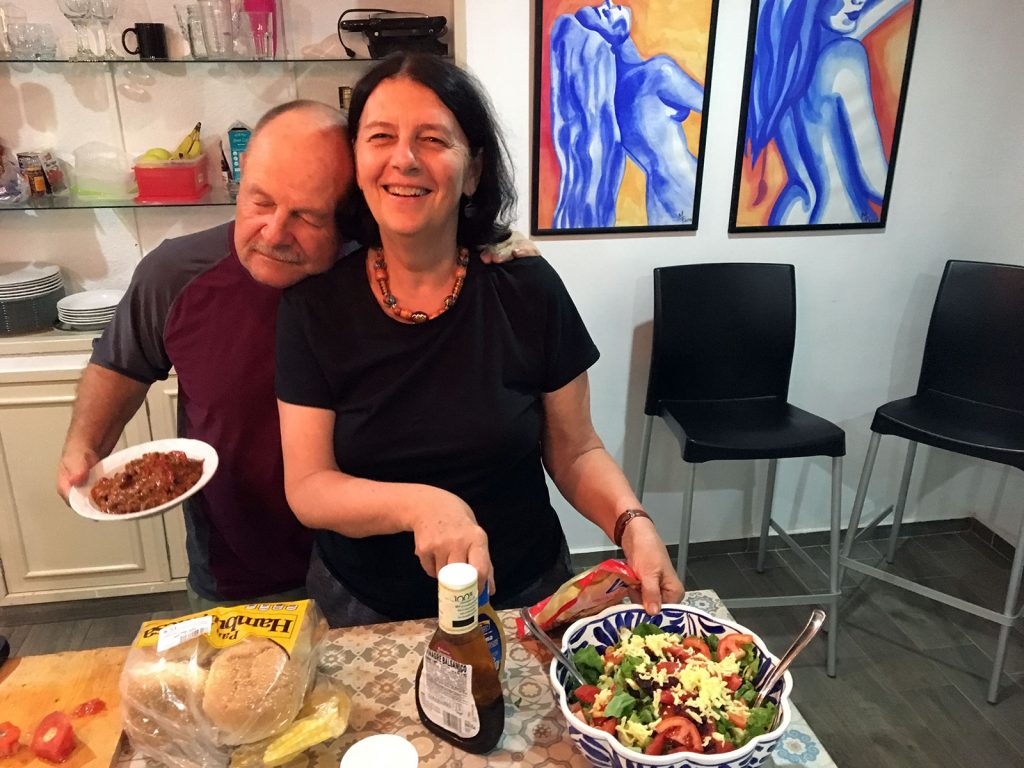 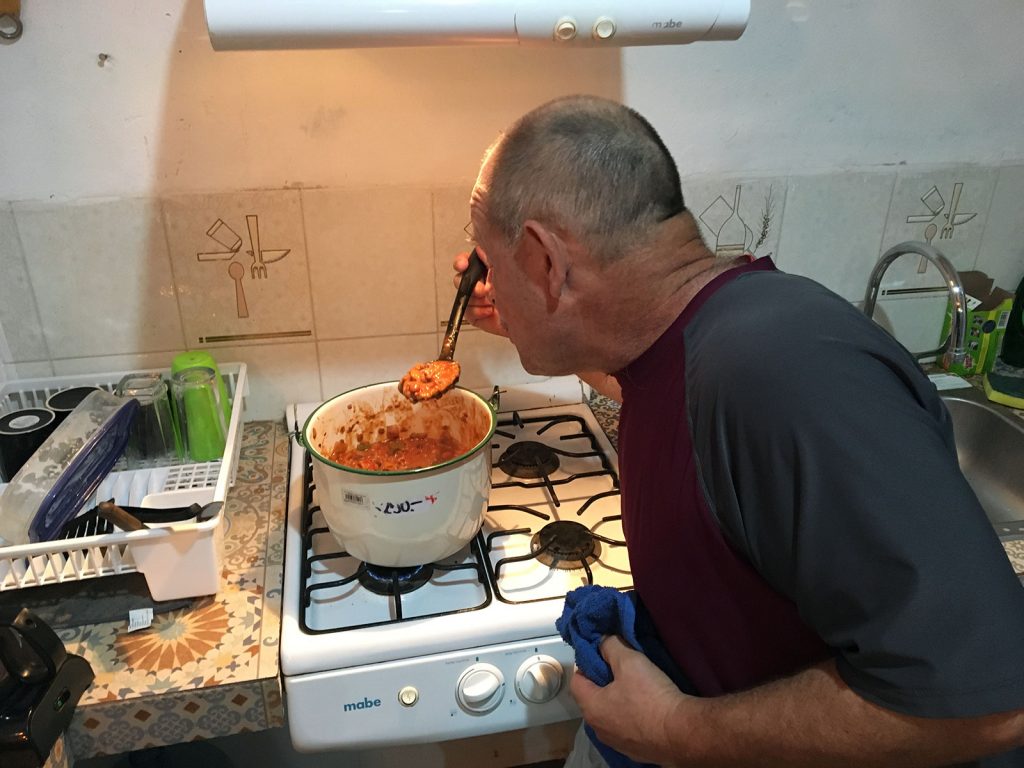 For supper Dave made a big pot of chilli. We enjoyed the chilli together with a salad which MaryLou prepared. Then it was movie time. Whose turn to pick tonight?

In the end we decided to watch a newish movie, “Bad Times at the El Royale”. It was long and a bit weird, but we stayed awake and quite enjoyed it. A little cake from yesterday, with a scoop of ice cream, for dessert.

Tomorrow we plan to watch some of our morning shows before going out for brunch and then heading down to Ken and Kaaren’s. And then? Olé Olé!