Every moving thing that liveth shall be meat for you; even as the green herb have I given you all things. Genesis 9:3

Another cool morning here in Merida. The locals are wearing sweaters and jackets and the talk is that it’s one of the coldest Januarys on record. Could’ve fooled me. Another GREAT day for golf.

We had a lazy morning. When I got downstairs Dave and MaryLou were watching a movie on our big TV. I had a bit of yogurt and what was left of the pineapple. And coffee. After the movie we each went our separate ways. I was up in my room trying to work on my website in between internet outages. Dave started watching the Narcos in Mexico series on Netflix. At some point before lunch MaryLou stopped threatening to go to the gym and just up and went to the gym. Dave fried up a couple of burgers for our lunch. We were expecting Ken and Kaaren to show up around one o’clock. Ken had a busy morning trying to buy tickets to the bull fight we’d seen advertised on our city tour of Merida.

When the Neufelds arrived at our front gate they the guards demanded that Ken leave his driver’s license at their booth as security. Weird. Kaaren joined MaryLou at our apartment while Ken, Dave, and me headed over to the course. Eighteen holes. A light breeze. Cloudy sky and coolish temperature. No profuse sweating today. A perfect golf day. 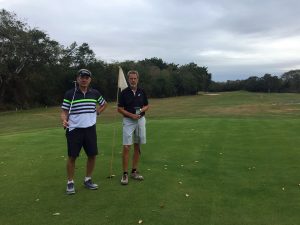 We golfed eighteen holes without every really waiting for anyone ahead of us. When we finished we parked our clubs and carts with the caddies and sat down at the patio for some beer and peanuts. It turned out that it was happy hour from 4-9 today, so our bill came to $3.50 for three beers! We should’ve stayed longer but the girls were all ready with supper and needed us to hurry home.

After showers and another drink back at the house it was time for supper. MaryLou had been busy preparing a taco salad for the group. We filed by the kitchen counter filling our bowls and then sat at our table. The table-talk was mostly about the challenges being a vegan, and why someone would want to be one. How do we feel about killing animals and eating them. Some of us wondered whether or not it was a good idea to go watch a cruel and disgusting bull fight during our stay in Merida. But all of us enjoyed the delicious taco salad MaryLou had made for us — including the hamburger meat we sprinkled liberally over our lettuce and tomatoes and “green herbs”!

Pepe came by and saw the five of us sitting around our table — he stopped outside and visited for a while through the screen window. After a small dessert of fancy chocolate cake MaryLou bought at our corner store this afternoon, our guest said goodnight. We’ll see them on Sunday.

When our guests left MaryLou headed upstairs to her room and Dave and I continued watching Narcos on TV. By 10:30 we were both barely keeping our eyes propped open and we too went upstairs to bed. Tomorrow we’ll probably go out for breakfast — bacon and eggs for Saturday morning. As it should be.