Nevertheless, the people who live in the land are strong, and the cities are fortified and very large; Numbers 13:28

It was quite a bit cooler here today than it’s been since our arrival. GREAT golfing temperature. But no golfing today. No, today we are heading into the Merida city centre.

After breakfast I tried to set up my computer so I might be able to sit out on our balcony and work on my projects. So I rigged up my extension cords, etc, only to confirm that there really is NO internet access at my end of the balcony. So Plan B — I’ll use my little work desk in my bedroom. That seemed to work for a while. So I fiddled with my web project. One step forward, two steps back — that’s how that project is working!

We got a message from the Neufelds — Ken has booked a city tour on an open bus for one o’clock. Be there by quarter to. So at 11:30 I had lunch (leftover pizza from nearly a week ago!). Then we headed out to the front gates to catch an Uber. Today the car showed up pronto — a little too quickly for some of us. But in spite of inner city traffic snarls we made it to the meeting point at the Santa Lucia plaza with minutes to spare. 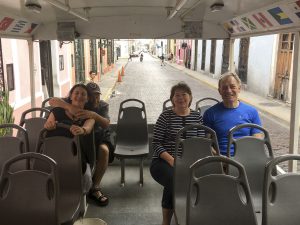 Since we were the first stop on the tour, we had our choice of seats. We made ourselves comfortable near the back. The driver made a little circuit and picked up enough other tourists that the bus was nearly full. A woman sat in the middle of the bus with a microphone and gave us the play-by-play in Spanish and in English.

The tour took a couple of hours and covered a good section of the city centre and beyond. The tour guide pointed out many important official buildings, but also many beautifully restored older homes. The main boulevard led out to the perimeter. Big traffic circles featured monuments and statues. 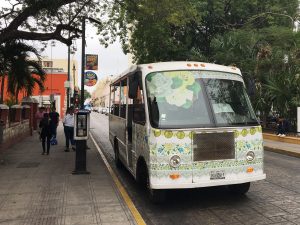 After the tour bus brought us back to where we’d started we walked the 2 blocks to the home that Ken and Kaaren are staying in. It is a lovely home with a private pool and a nice kitchen and several areas with seating for visiting. Which is what we did. And then we walked across the narrow street to a little hole-in-the-wall “restaurant”. The cook seemed a bit flustered by our showing up there — but offered us two different options when we asked if we could get something to eat. We ordered both. Then a man who could speak a bit of English came from an adjoining room. Drinks? Cerveza? No, sorry, no. No license. Ken asked if we could bring our own. The man seemed a bit unsure, but decided that would be okay. So Ken goes across the street to his house and comes back carrying 3 glasses of beer. Kaaren and MaryLou share an ice tea. When the food arrives we get four plates, two with something that resembles ‘spring rolls’ (but they’re not spring rolls) and two plates of little ‘mini-pizzas’ (but they’re not mini-pizzas). But the food is good. When we’re done we go across to the house to pick up our things. We arrange that the Neufelds will come to our place tomorrow right after lunch. 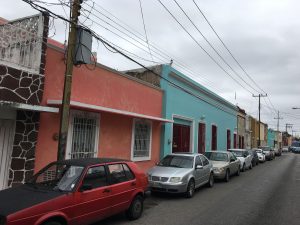 As we walk along the sidewalk Dave suggests we try taking one of the local buses instead of calling an Uber. Great idea! We walk a couple of blocks until we reach a one-way going north, the direction we want to go. We stop a young lady on the sidewalk and ask her for help hailing a bus. We explain that we want to go to the large “Chedraui” grocery store. The girl flags down a bus and explains to the driver where we want to go. Yes, he nods. We thank the girl and get on the bus. The fare is 8 pesos each — just over 50 cents! The bus makes a few stops along the way, but the trip is not much slower than if we’d taken an Uber. And when google maps on my phone shows that we are very near the grocery store and I suggest we get off at the next stop I see the driver signalling me in the rearview mirror — he’s looking after us and motions that we should get off at the next stop.

While Dave and MaryLou start the grocery shop I run across the parking lot to a big sporting goods store to buy some new golf gloves. Then back to the grocery store where the Driedgers are about ready to go through the checkout. Dave calls an Uber while I get a bit more cash from the ATM in the store. When the taxi arrives we plop all our groceries into the trunk. We ask the driver to not drop us off at the front gate, but rather to take us to our house.

The groceries get packed into the fridge. It looks like beans will be on the menu for a few meals in the next little while! Dave and I plunk ourselves down and look for something meaningful to read on our phones. MaryLou disappears up the stairs. I soon head upstairs myself. As flaky as the internet here is at times, it will take the rest of the evening to post my journal for the day. Ah, but it’s Mexico and there’s nothing pressing on the agenda. We’re in Mexico!