Another great ‘Saturday’-style breakfast at our B&B — scrambled eggs, bacon, sausages, mushrooms, tomatoes. Then at 10:30 we squeezed into our car and drove up the five blocks to Paul and Shirley’s house. From there they led us out of Hermanus and out into the surrounding countryside for a day of wine-tasting. Shirley had made a few cheese-cakes which she was delivering to some of the vintners whose wine the Martenses import into Manitoba.

Our first stop was at the Bouchard Finlayson Winery. There we were introduced to the owner, Mr Peter Finlayson. He was working in the back, but when asked if he would do a tasting with us he immediately left what he was doing and took us to the tasting room. He asked for the ‘big’ glasses, even though we’d been instructed not to swallow, to use the ‘spittoons’ on the table or we might not make it through the day! The Martenses credit Peter with ‘opening doors’ for them when they first started in the import business. He sat at the end of the table and called for one wine after the next. He had a quiet demeanor, and as we tasted the various wines, gradually working up to some very expensive vintages, he would make comments about each one and ask for our ‘opinions’. Peter reminded me of Ernest Hemingway, and it felt a bit like we were in a movie, sitting around a big wooden table, with the godfather at the head. 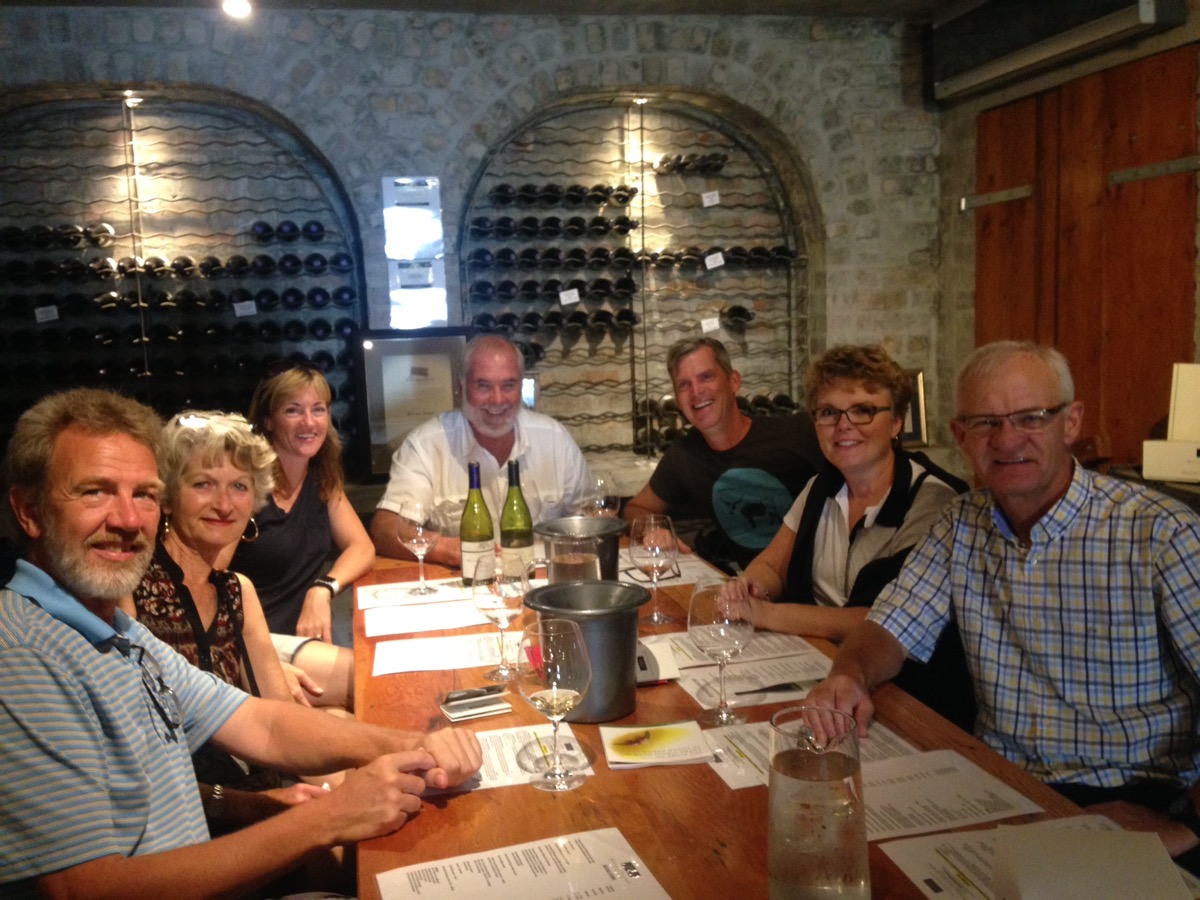 Because of the big traffic jam on the main highway into Hermanus, we had changed our route this morning. To get to the next winery we took a ‘shortcut’, or at least an alternative road. We drove through some very beautiful country, but quite bumpy gravel roads, for about 45 minutes. After passing through the tiny town of Bot River, we turned into the driveway to the farm and the home of Luddite Wines. A big truck was just delivering a load of grapes to the wine press. It is harvest time in the wine region; we are visiting wineries at their busiest ‘work’ time of the year.

We parked and walked up to the home of Niels and Penny Verburg. They welcomed us warmly and introduced us to their friends, Melissa and Ewen, who were joining us for a homestyle dinner. All ten of us sat around their big dining room table. Niels, who came in from the shop wearing big rubber boots and grape-stained shorts, began pouring glasses of wine for us to taste. He also told us how he started making wine 16 years ago, after working with wine-makers around the world. Niels is a big burly, sunburned, cheerful South African. He LOVES making wine ‘the old way’. Less technology, less additives and manipulation and interference of the process, and smaller batches. His newest wine, Saboteur, is a bit of a surprise hit, and there is a sense (and maybe a bit of regret) that it may force the Luddite winery to scale up their production. Niels said he didn’t care about the money, he just wanted to live a good life on his farm, make wine and play golf. I believed him.

After several glasses had been poured it was time for lunch. Penny served the delicious cold tomato gazpacho soup she’d made. Fresh bread. Two huge platters of salad with barbecued steak, tomatoes, feta on a bed of lettuce. Paul and Ewan were sent down to Niels’s wine cellar to select a dessert wine to go along with the homemade cheesecake Shirley and Paul had brought. We felt like we were part of a big family here — everyone sharing stories, laughing and talking, and getting to know each other.

Niels’s day had started off a bit late when the first truckload of grapes arrived at noon instead of at 9 in the morning. He needed to get back out there. So we said goodbye to our new friends and headed out to the shop to have a quick tour before going on to our next winery. Again, Niels took time to show us the workings of his small-scale operation. As busy as he was, there was always time for friends, even if they are new ‘friends of friends’ as we were. 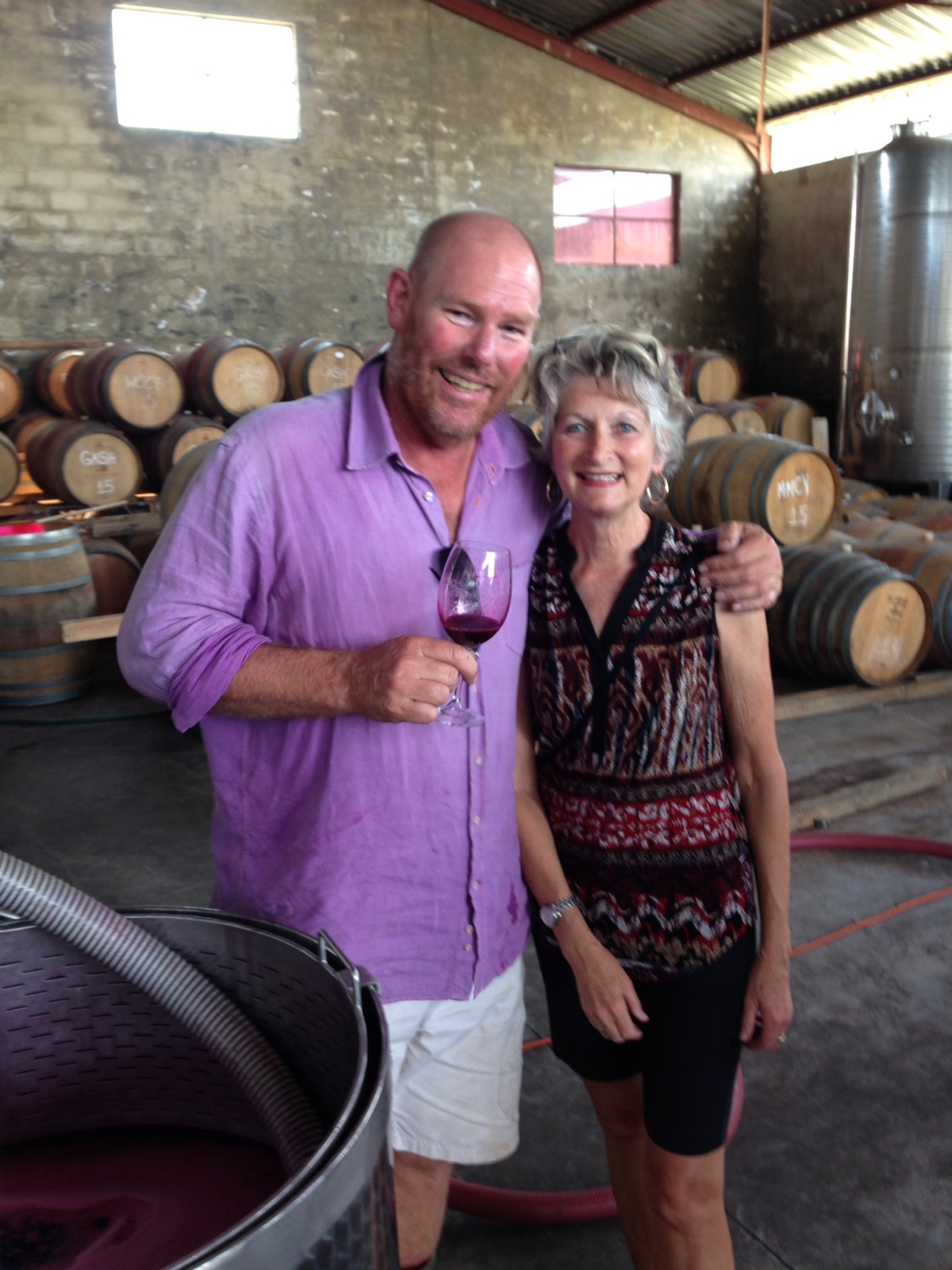 Our last tasting was at Gabrielskloof. Peter-Allen is the son of Peter Finlayson, the owner of the first winery we’d visited today. Paul and Shirley describe him as one of the new young ‘rock stars’ of the South African wine industry. Again, he was busy working in the shop when we arrived, but immediately volunteered to take us for a tasting and a tour, not doubt due to the promise of some of Paul and Shirley’s homemade cheesecake. We again sat around a large wooden table in one of his big luxurious tasting rooms and began another round of swishing and spitting. We each had 3 big glasses in front of us, and Peter-Allen poured 3 whites followed by 3 reds for us to taste.

Then we left the tasting room and headed for the ‘factory’. Where Niels’s operation was all-natural and back-to-basics, this one was all high-tech and big volumes. We walked through 3 floors of all-steel refrigerated vats and new oak barrels and crates and palettes of bottles. Peter-Allen pulled a big syringe of wine from assorted barrels and squirted a sample into each of our glasses for us to taste. Spit into the gutter, move on, do it again. I think we tasted nearly a dozen wines at the Gabrielskloof Estate. 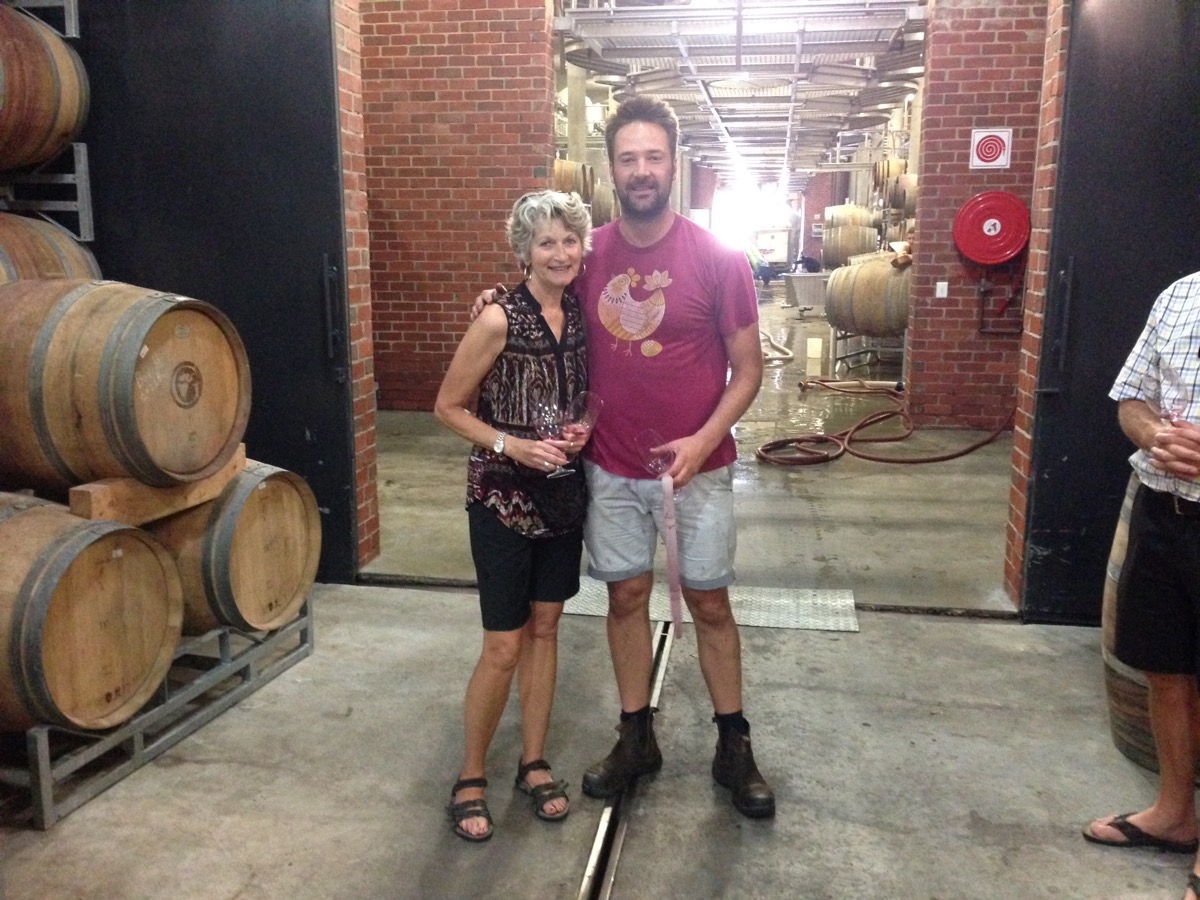 Paul and Shirley had one more winery to visit (and deliver cheesecake to) but it was after 4 o’clock and the Dycks and Nikkels were tired from all that ‘hard work’ and ready to head back to our hotel. We retraced our route through the countryside and got back to Hermanus around 5:00. Just in time for happy hour in the big common room over-looking the ocean. For once we could sip our glass of wine and not spit!

What should we do for supper? Our lady suggested Harbour Rock and offered to call them to make a reservation for us. So at 7:30 we were at this busy ocean-front seafood restaurant at the ‘New Harbour’ in downtown Hermanus. The girls ordered fresh prawns, Robert had a seafood platter, and I had sushi. We were nearly finished our dinner when my phone chimed — a text from Paul and Shirley: Casper and Meghan have invited all of us to their house for dinner Friday night! Wow! How can you help but not fall in love with this country? Good food, great wines, and marvellous friends!