We remember the fish, which we did eat in Egypt freely; the cucumbers, and the melons, and the leeks, and the onions, and the garlick: Numbers 11:5

By the time I got out of bed this morning the street outside my apartment was already fully alive. Street sweepers, delivery vans, families and dogs heading for the beach, the construction guys doing a reno next door, the juice man across the street already a quarter of the way through his mountain of fresh oranges. Because of my cold, which was getting better every day, I still didn’t have much of an appetite. I ate my yogurt and drank some of my grapefruit juice and called that breakfast.

I lazed around the house for most of the morning. I called my mother who was a bit distressed about why her credit card wasn’t working. Then I got into a Low German email exchange with my brother. I tried to sit in the ‘palapa’ in the back yard but the cloudless sky made today feel quite a bit hotter than it has been here so far.

The kids were coming at around 1 o’clock. The plan was that they would spend the day here in Puerto Morelos with me. I tried to buy some more beer at the corner grocery before they arrived, but the Mexican version of the brinks truck was there filling up the ATM machine. That meant that 3 guys with their automatic rifles were blocking the whole back third of the store, including the beer coolers, while they were busy with the machine. I tried to get one of them to hand over a six-pack, but he wasn’t in the mood to serve customers.

When the kids arrived we all went out to the hammock and garden chairs in the palapa. Alex was hot and uncomfortable — bothered by the heat rash she gets from too much sun. It turned out that the fan parked at the back of our hut didn’t work, so we went back inside. My little air conditioner, which I hadn’t used until now, soon got the place quite comfortable. Tim and I went to get some chips and beer and I got a couple of tacos from a little food shop on the street. Max was tired — they had had their usual active morning at the pool — so he watched a bit of TV and pretended to have a nap.

At around 5 the heat of the day was behind us and we went out for a walk. We headed to the beach. Boats were coming in, some fishing, some snorkelling. The two long docks had fishing poles sticking out on either side. Families were still sitting under umbrellas in the sand or playing in the water. 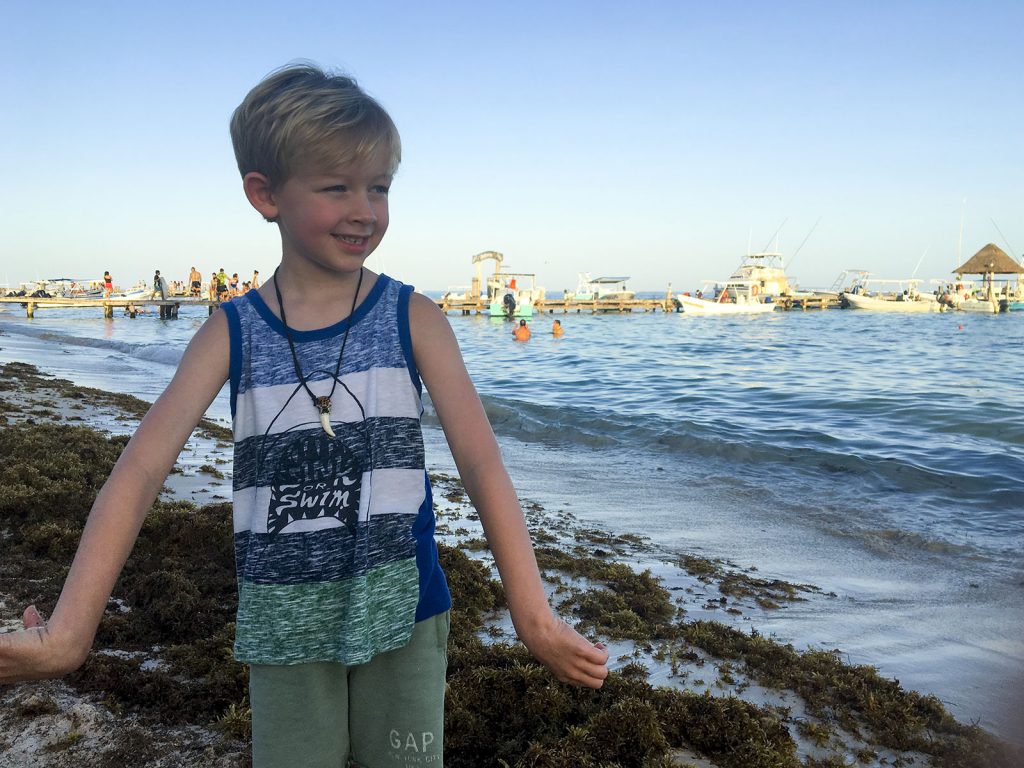 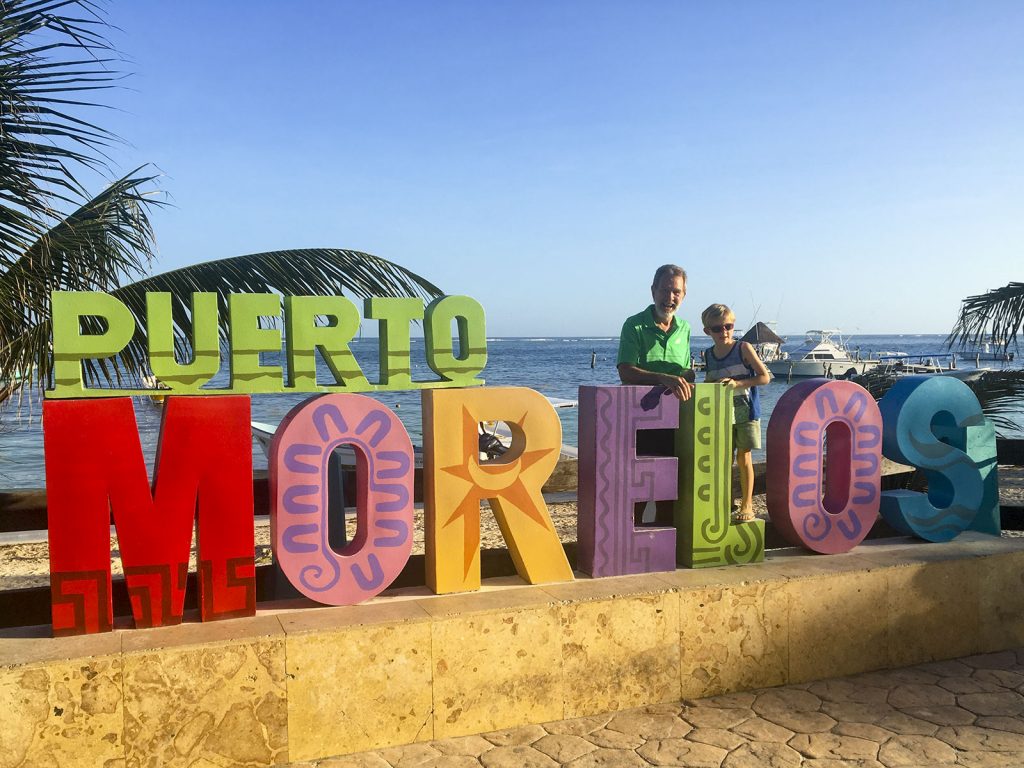 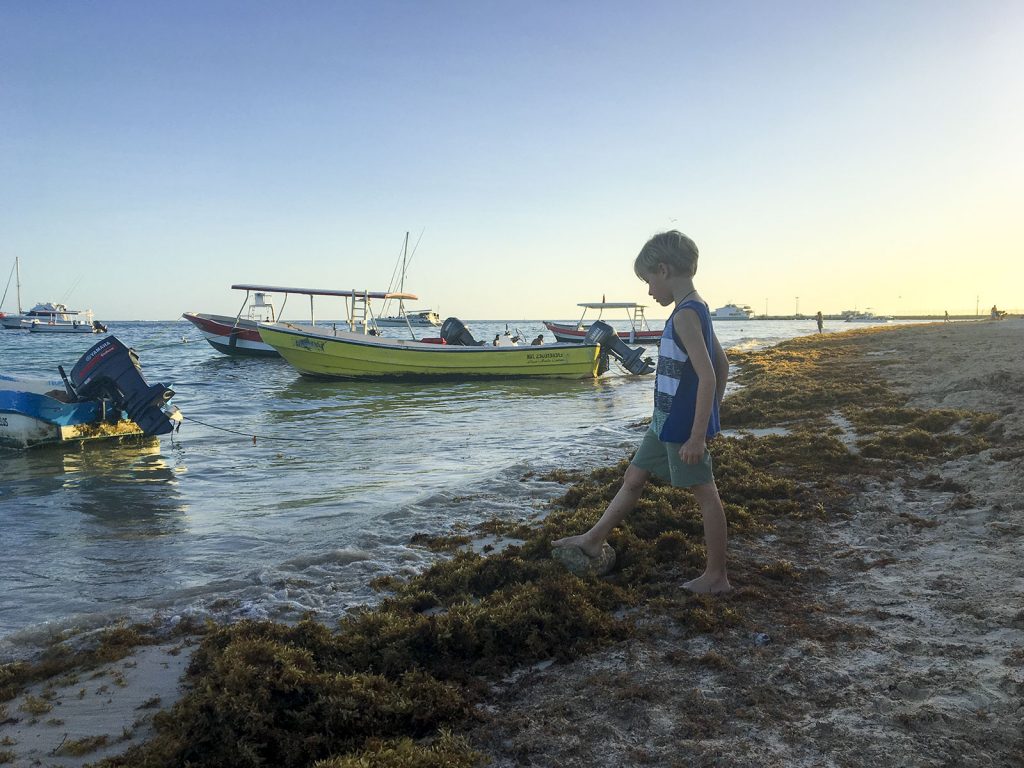 We wandered around, looking at restaurants and checking out the little tourist shops in the town centre. Max found a shark-tooth necklace. Tim and Alex did not find dishes that would quite go with the rest of their home decor. I had fun watching Max try to build a seaweed wall that would hold back the waves as they came into shore.

Eventually we found the recommended seafood restaurant. We got a table and a friendly waiter helped us decide on what to order. Max’s shrimp cocktail was okay, my fried fish was good, the big plate of ceviche we all shared was very good. Some of us had an ice cream cone on the way home.

After the kids had taken the taxi back to their resort, I sat in my apartment and enjoyed the cool(er) breeze that was blowing through my screen doors. I watched a bit of news on TV. Caught up on the latest emails. And because I was so tired from doing nothing all day, I went to bed.