Unlike yesterday morning, when we both slept in and nearly missed breakfast, this morning we were both up before 6am. We had set the alarm for 6:45 in order to meet Paul and Shirley down at the beach by 7:25 for a walk along the beach. The sun rose at 6:30 and low tide was at 7:35 today, and according to Paul and Shirley, going for a 12km walk on the firm sand left by the tide was one of the best things to do in Hermanus.

Robert and Arlene needed both their alarms to get up in time to join us. The four of us drove down to the beach parking lot where Paul and Shirley were waiting for us.

The plan was to go for a brisk walk along the beach until we reached ‘the rocks’ just over 6kms east, and then return to the parking lot. Along the way we saw thousands of mussel shells (the seagulls seem to have no issue with ‘red tides’ which have kept fresh mussels from being served at many of the restaurants we’ve visited). We saw other shells too, and a couple of stranded jellyfish. We even saw a dead seal that had been left behind by the tide. Although it was sunny at the hotel when we left, a heavy mist was rolling in from the ocean and for most of the walk we couldn’t see the mountains that run alongside the coast. So much for the scenery, but it sure made for a comfortable walking temperature. 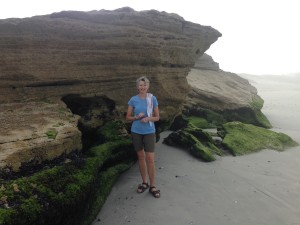 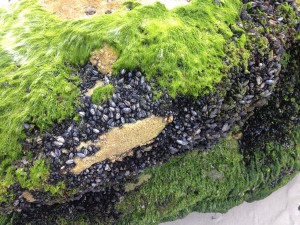 There’s life on the rocks.


Not too many other early-morning walkers out, although we DID meet a few, some taking their dogs for a run as well.

When we got to ‘the rocks’ there was another group (about 6 people) who were stopping there for a quick energy bar before continuing their walk. I climbed up to a ‘fort’ in the rocks — apparently someone actually lived there for a time during the war.

And then we walked back. It was nearly ten o’clock when we got back to the parking lot. The sun was doing its best to get through the fog and it was warming up. And there were quite a few more people out on the beach now.

We made it back to the B&B before they stopped serving breakfast (7:30 to 10:30). Good thing, too, because we’d worked up a powerful hunger with all that walking (and talking)! After a quick shower I headed down to the dining hall and had my scrambled eggs and sausages.

We sat in the upstairs big room for part of the morning. Shirley Martens stopped by to drop off a bottle of Ratafia for Arlene. They had been looking for Ratafia yesterday but apparently the liquor store was sold out. After making a call to another wine store and confirming that they had a dozen bottles in stock, we decided to combine a Ratafia run with a visit to the town centre for our lunch stop.

And so we went to town. Parked the car, got the wine, and ended up at the ‘La Pentola’ restaurant which had been recommended to us by our B&B host as well as the couple behind the counter at the wine store. Good choice! Four lovely plates, good drink, nice friendly service, and a view of the ocean. THAT’S why we love South Africa.

By 4 o’clock we were back at the hotel — and still the rain forecast for 2pm had not arrived! But a cloudy, misty, windy afternoon, especially after a long lazy lunch with a glass of beer or wine, easily lends it self to a bit of meddach-schlop.

And then it was time for happy hour. Our host lady had tried to get dinner reservations at a few nice restaurants for us this morning, but it’s Friday — the weekend — and the restaurants she tried were all booked up. So I’d called ‘Dutchies’, the little beach restaurant a few hundred metres down from our place, and confirmed a 7:30 table.

As we sat in the big room, having a glass of wine, the rain started. A little late, but at least the iPad weather app was not a complete write-off. And it rained pretty hard. This would be a good test for our new ‘water-proof’ rain jackets! We decided to take the car down to the restaurant.

When we got there we thought that likely the bad weather had scared off all the customers — there was nobody here! But after parking our car and opening the door to the restaurant we learned that bad weather was NOT bad for business! The place was full of customers!

We got a table in the corner and ordered our drinks. Then dinner. Not bad! We had a fine meal and even better dinner table conversations. Around 9:30 we finished our ice-cream dessert and got back in the car, headed for home.

We met again, this time in the ‘big room’, and shared a glass or two of Ratafia, from the bottle that Shirley had brought this morning for Arlene. It’s our second last night in Hermanus — our second last night together with the Dycks. It’s been fun. We’ll miss them when they go home on Sunday.