When I got up this morning I expected it to be raining outside. And I guess it HAD rained — the patio floors were wet. But the sun was shining. And it was actually a bit WARMER than it had been for a while. I checked my laundry which was draped over the TWELVE dining room chairs around our big dining room table (in our big dining room which unfortunately we will never use because we won’t have that many guests and it’s almost always too cold to sit in that big dining room) — but (as Menno Rempel is fond of saying) I digress. Most of the laundry was dry, and what wasn’t I hung up on the lines outside for about half an hour by which time the sun and the breeze had done their thing.

Marylou enjoys sitting at her computer researching various things. We had decided that today might be a good day for another road trip, and this morning she was ready with a suggested itinerary. So, after breakfast, we hopped into our car and went out to find an adventure. Marylou was suggesting THREE stops: a hike around a big inland lake (I forget the name of it), a visit to a castle in an inland town (I forget the name of it too), and a winery tour (the name of the winery had something like Fransisco in it because it was owned by a French couple). Okay, I don’t remember the names, but I DID have the places all punched into my Google Maps app on the phone so we wouldn’t get lost. And we DIDN’T get lost, although we ended up turning around quite a few times when the map led us down a wrong road (or trail!).

First stop was at a big dam next to ‘Barragem da bravura’ (I looked it up). There was a little cafe at the parking lot, but it was closed for the season, opening up at the end of this week. So much for a quick lunch stop before we set out on a hike. We walked down the trail to the big dam. We walked across the dam to the other side. There was a trail leading around the lake that had been created by the dam. We soon caught up with some German folks who were doing the same thing we were — only more ‘official’ with their walking poles. We assumed they were walking right around the lake, and we would do the same. But the leader of the group told us it would take several DAYS to walk around the lake. Hmmm… Okay, we turned around and headed back to the car. We were not interested in a ‘several day’ hike. 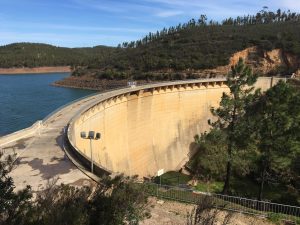 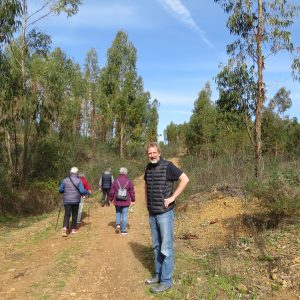 After a couple of false trails out of there, we ended up in the town of Silves, site of the Castelo de Silves. We drove up to the castle which towered over the town, and then we drove back down and parked next to a restaurant on the main street. It was 12:30 and high time for lunch. The ‘special’ of the day was Portuguese pork ‘stew’ — a half portion for 8 Euros. Sounded ‘authentic’. Dave ordered it. Marylou ordered chicken and chips and I ordered chickpeas and cod. When our plates arrived they were MASSIVE. 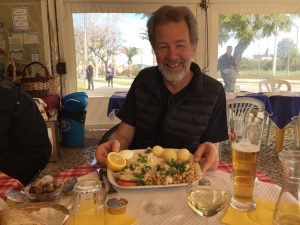 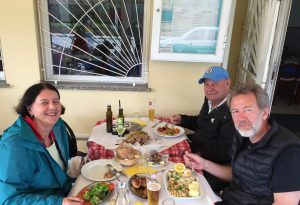 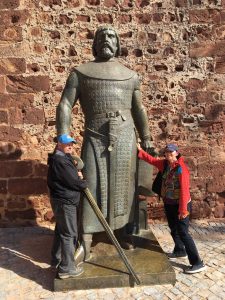 No problem leaving our car at the restaurant parking lot and HIKING up to the castle. When we got there Dave and I decided that we’d be okay NOT paying the 3 bucks admission and letting Marylou go scout it out on her own while we waited for her outside the castle walls. So that’s what we did. Of course, when Marylou came out about an hour later we had already sunned ourselves good and proper at an outside table in front of a orange juice shop.

We walked back down to our car and decided that if we were going to make it to the 4 o’clock wine tour we would have to hurry. So we did. And then we took a wrong turn. And then another. But we DID stop at a roadside fruit stand where Dave bought TWO huge bags of oranges from a lady for 3 Euros.

When we got to the Quinta do Frances Winery we were told that the next (final?) tour would be in about 10 minutes, as soon as another group of people arrived. So we didn’t have to wait long. Our guide was a young Portuguese lady who did the usual wine tour thing. She talked about the origins of this particular winery (not very old) and the types of wine they make here. We went down into the cellars to see the big vats and the various machines that crush the grapes, etc. Then down another set of stairs to where they stored bottles and cases of wine. By now I have been on so many wine tours, and I didn’t think this one was particularly good anyway, so I wasn’t all that interested in the MAKING of the wine. And it wasn’t long and we were back upstairs in the tasting room. We were served a two white and one red. We paid the girl and were soon back on the road, heading home. 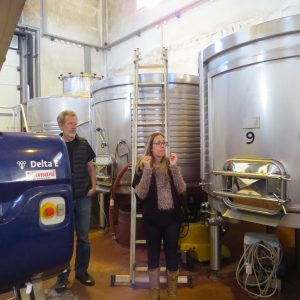 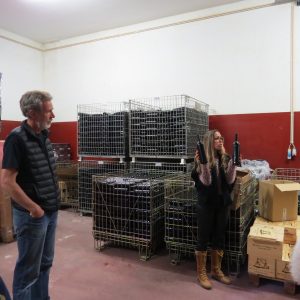 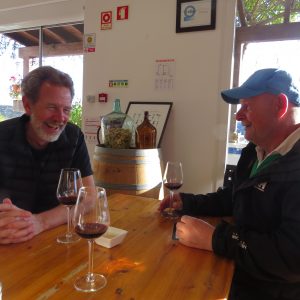 Back at the apartment it was back to your stations, everyone busy on their devices, making sure the world was still turning as it should. Marylou had photos to sort through and when that was done she hauled out her art book and pencil crayons; Dave was on the couch, catching up on several online scrabble games he was playing on his phone; I was thinking about supper. The cleaning lady must have left just before we returned, so the floors were all clean and the place smelled of soap and disinfectant.

We warmed up assorted leftovers and had supper. After we’d eaten and cleaned up the dishes we were back in the living room, which really DID feel warmer today. Olympic highlights on TV — I’m not really following the olympics but I think the Canadians won some medals today, maybe for snowboarding or for figure skating. After a while Dave switched over to Netflix and we started watching the latest season of ‘Homeland’. Marylou was visiting with relatives in the kitchen via FaceTime. It was quarter to eleven by the time I updated my journal — time for bed. We have a tee time at Espiche tomorrow morning. Hope the weather keeps improving.