Got up, made coffee, read the news. Sue made breakfast and wondered why I don’t ever mention the f-f-f-FABulous (Millie’s expression) fruit we eat here in South Africa. And right while she was saying that I was thinking, “What exactly does Sue think is so great about fresh papaya and bananas?” We’re such a good couple…

After breakfast Sue read her book and I worked on a website. Just before 11 we headed out; destination: Bree Street in the City Centre. Google Maps said it was 2.2 kms to get to the part of town where all the ‘cool’ restaurants were. But we stopped at some kitchen stores and some grocery stores along the way and it was probably close to noon by the time we had walked most of the way up Bree Street and decided on a lunch place. And that’s how we found ourselves sitting at a small outdoor table on the sidewalk in front of Bacon on Bree. Guess what they serve there? Well, the folks sitting next to us got a couple of plates with HUMUNGOUS burgers on them — and bacon spilling out from all sides of the bun. I was tempted, but Sue nixed that idea. So we looked at the ‘Breakfast’ choices. And ordered the first two on the menu, eggs and toast for Sue, and some kinda Mexican bean breakfast with a sausage for me (no need for ‘toast’ — bread is much too fattening for me anyway). 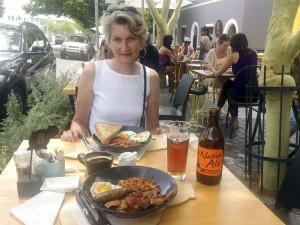 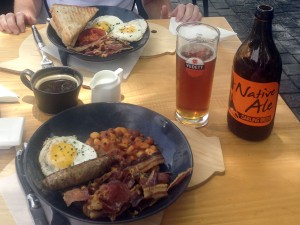 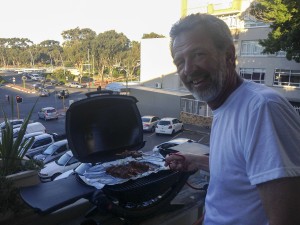 So if the Canadian dollar ever goes back up a bit and the hog farmers in Manitoba find themselves needing a new market for their pork, well… I know Ed has ‘schracklich fail schwien’ in his barns, but this bacon joint was serving it up like it was as cheap as oil in Alberta!

On the way home we stopped at some of those stores we’d “browsed through” on our way up and Sue bought a few knick-knacks for the kitchen. Then, once we got close to home, I went to the Ultra Bottle Shop and got a couple of 6-packs of Pilsner Urquell and Sue went to the butcher shop to get some skewers of lamb and beef for tonight’s supper. We got into the apartment at 2:30 — we’d walked just over 7 kms, had a great lunch, and were all set for our supper to boot!

Sue finished her book, Fifteen Dogs, and started her next one. I got going on a new website. No nap today. At around 6:30 it was time for supper. Sue cooked some manicotti and cauliflower while I barbecued the beef and lamb on the ‘braai‘ on our balcony. (The two university boys we golfed with the other day told us that actually a ‘real’ braai involves charcoal, and what we have is just a ‘wannabe’ braai!)

When Sue had the dishes all cleaned away it was time for our evening matinee. Tonight’s feature film was Brooklyn, nominated for 3 Academy Awards. Sue said it was a ‘sappy story’, but she sure enjoyed crying most of the way through it. After the movie we watched CBC’s “The National” on my computer and had some yogurt for dessert. And that’s the way it was today in Cape Town.