After breakfast on this ‘Happy Valentines’ day, I left for a walk. I wanted to be back at the apartment by around 3:00 so that the three of us could walk to the neighbouring town of Lagos where we planned to have supper and to see a movie. I wanted to give the Driedgers a bit of a break from me — a bit of ‘space’. And I really wanted to go for a ‘workout’ walk. So I decided to do my own walk to Lagos, have lunch there, and walk back — and still be home in time to walk back to Lagos one more time. The walk to Lagos is actually a 7.5km hike over a big hill that lies between Lagos and Luz (the town we’re in). It was a cloudy day which made it ideal for a brisk walk. 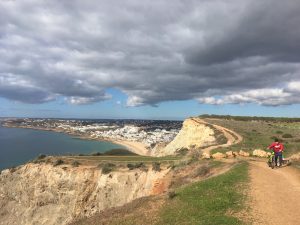 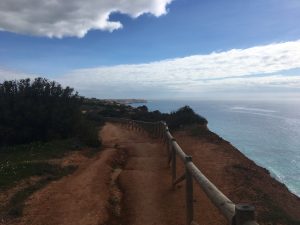 The path is along the coast — and there are parts of the walk that remind me of the cliff walk we enjoyed in Hermanus, South Africa, a couple of winters ago. Both walks featured a good path and ‘feinbush’ vegetation along the coast of an ocean. (see some of my Hermanus ‘cliff walk’ photos below). 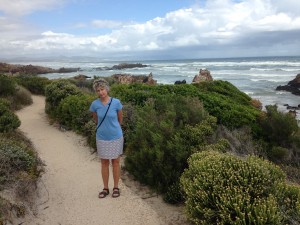 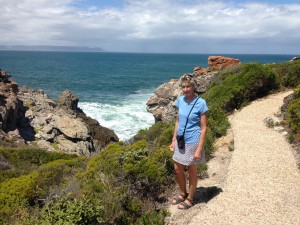 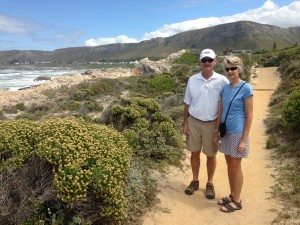 I took a few photos again today, including some shots of a large group of surfers. 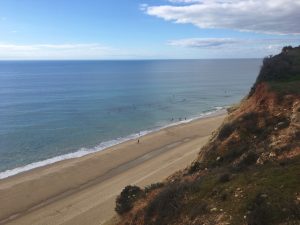 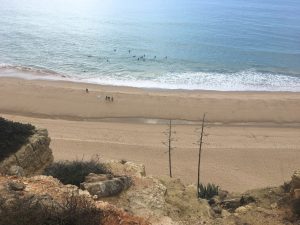 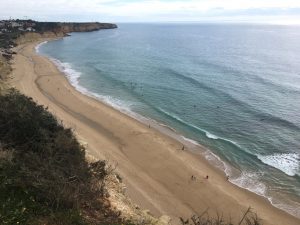 And some more of the interesting rock formations along the coast. There are numerous signs along the path, warning hikers that they do so at their own risk and that the edge of the cliffs are prone to collapse into the sea. But someone has smashed all the signs along the way so I guess that means we just don’t have to worry about that anymore! 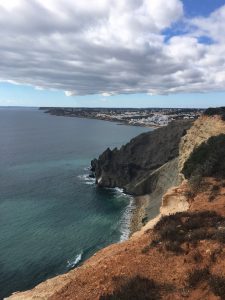 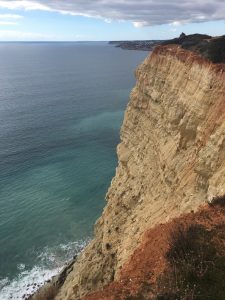 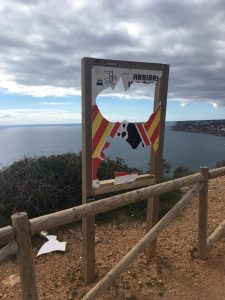 I got to Lagos around noon, so my first stop was to have lunch. Then I wandered around the city centre for a bit before heading back to where I’d come from. It took me just under an hour-and-a-half to walk the 7.5kms each way. Back in town, I spent some time on the promenade, watching tourists and looking for dolphins in the water. I was back at the apartment by 3.

We left for Lagos again at around 4pm and were there in just over an hour and a half. We wandered around a bit, looking for a suitable restaurant. We decided to try the restaurant that the two Swedes we golfed with on Sunday had recommended. We found it but it was closed; opening at 6pm. Well, that was in about 10 minutes, so we waited outside until it opened.

We’d been ‘warned’ that the portions at this restaurant would be big, and they were. Dave and Marylou each ordered a fish dish and I had prawns. Lots of food and it was pretty good. We left at about 7:10 and found the movie theatre just a couple of blocks from there — and bought tickets for “Phantom Thread”, a Daniel Day-Lewis movie nominated for Best Picture. The movie was terrible — boring and terrible. We were hoping to catch a bus back to Luz but I think we must have missed it by a couple of minutes, and the next bus was over an hour later. So we took a taxi back to our apartment.

Back at our stations in our now-comfortable living room, we had a small bowl of ice cream and a glass of port before calling it a night. Tentative plan for tomorrow? A drive to Albufiera.