We got up at 7. Sue made scrambled eggs for breakfast. Then we were out the door and at the Driedger house by shortly after 8 to pick up Dave and Marylou and Hans. Off to the Waste Management Phoenix Open at the TPC Scottsdale.

The drive up to Scottsdale was no problem, but things slowed down a bit once we turned off the freeway and made our way to the parking lots. S – L – O – W. We parked the van and decided to leave our jackets in behind — although it was cloudy and not hot, the day was supposed to be warm and no rain. Not so for tomorrow and Saturday — the forecast is for rain. So today was THE day to go watch the golfers. And we were not the only ones who were thinking along those lines. No, the LINES of people waiting to get onto one of the many free shuttle buses that would take us to the gates at the golf course were very long, and getting longer. We were given clear plastic bags to put our stuff into as we went through the security check stop. In fact, no cameras, no backpacks, no firearms were allowed in so we had to leave that behind in the van.

The bus driver needed a little navigational help from the passengers to get us to the gates, which were about a mile straight west of the parking lot. (I guess the organizers had to scramble a bit to find drivers and other services for the expected record-breaking crowd at this event.) Once we got there we quickly bought our entry tickets ($30 each), walked through the big tent of souvenir shops and golf merchandise, and there we were at the 18th hole. We agreed to meet back there at 3:30 and then we were off. 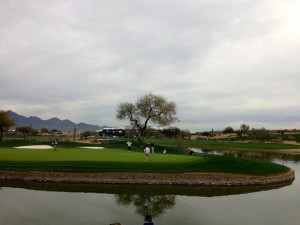 Green at the 12th Hole 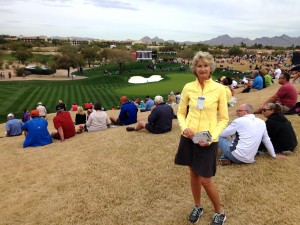 On the hill overlooking the 8th green 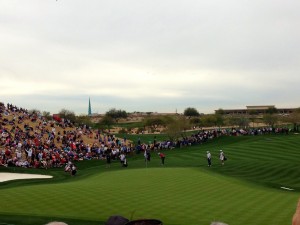 Tiger chipping onto the 6th green 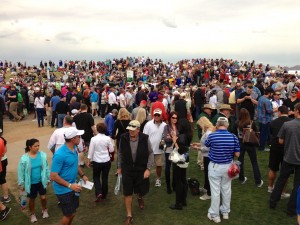 Big crowds at the 11th tee 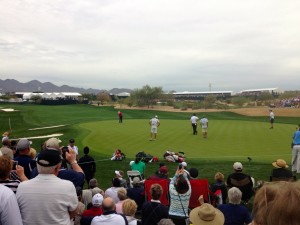 Tiger putting on the 10th green

Sue and I ended up going past the big noisy ‘arena’ that is the famous 16th hole (no chance of getting into there — the balconies were already full (and boisterous), and the long line-ups to get in seemed to be not moving at all. We ended up on a grassy knoll from where we could see holes 6, 7, 8, and 12. We were too late to see Mickelson who had teed off at 8, but we DID see lots of big-name golfers, including Tiger Woods and Bubba Watson. Tiger was already at +3 by the time he putted out on hole #6, but there was an enormous crowd following him around the course. By the time he got to the 10th hole, which finished just below the giant stadium around the 16th, crowds were so thick that it was actually hot! People were fanning themselves with their programs. The poor old guys whose job it was to hold up the ‘QUIET’ signs when the golfers were putting or teeing off looked hopelessly ridiculous. There was no ‘quiet’ on this golf course! The only places where it wasn’t crowded on the course were downwind from those big fat cigar smokers with their big fat cigars. This was more of an ‘event’ than a ‘golf’ tournament. It was more about the ‘audience’ than about the golfers. And WE were part of the story — WE were part of the record-breaking 118,461 attendees.

We met back at the 18th hole at 3:30 and decided to avoid the long lineups for shuttle buses and WALK back to the parking lot. We got into the van and wound our way back onto the freeway, joining the parade of cars crawling south on the 202. There had been a few very light sprinkles of rain in the afternoon, but not enough to dampen our spirits or our programs. Now, as I did my best to finagle my way into the far left ‘HOV’ lane, the rain started to come down more seriously. Good timing. We made the right call.

We got back to Gold Canyon at around 5:30 — not too bad. We dropped off Hans and the Driedgers and went home. Sue made supper. I switched on the Golf Channel and watched highlights of the day. Alex and Max skyped with us for a bit. After supper Sue and I watched a few more episodes of ‘Suits’ before going to bed.