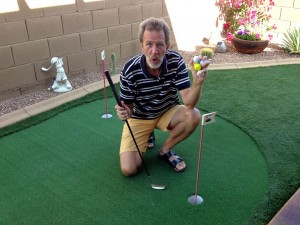 Today, before lunch, Sue and I went to the Gold Canyon Golf Course to hit balls at the driving range. We swung our clubs for over an hour. I actually tried out a TaylorMade driver from the pro shop, but was disappointed. I can hit the ball very well with Sue’s driver — so I’m tempted to buy one just like it for myself.

As has become my custom, I watched “Holmes on Homes” on TV while we had lunch. The hour-long show was followed by a second episode, so I stayed on the couch to watch it as well. When I woke up I heard Sue, sitting in the bedroom, talking on the phone. I went outside and practiced my putting. I’ve been putting better lately, in part because I’ve been practicing on our little backyard putting green. Until today, I just couldn’t seem to get all four golf balls to sink in a row. I could sink three almost any old time, but until today I could not get the fourth one to follow. And, if it’s anything like the game of golf itself, once you break a hundred (or ninety, or maybe someday, eighty) apparently it is easier to repeat the feat from then on. And so I expect to be able to putt four in a row from now on.

I noticed that my internet was acting up — I couldn’t access any of the sites on my server. So I spent an hour on the phone trying to get to the root of the problem. I ended up in a long ‘chat’ session with Mediacom, our ISP here in Phoenix. I’m convinced it is their system that has me locked out — but the ‘techie’ on the chat session wasn’t very helpful. I’m hoping that it will get corrected soon. In the meantime I’m using my phone as a ‘hotspot’ to connect and to post to my site. Not ideal.

After supper (pizza) we sat in front of the TV and watched a couple more episodes of “Suits”. We also watched a movie on Netflix (“Stuck in Love”). So-so. News at 11:00. Good-night.