After morning fruit we watched a bit of television. We’ve discovered (too late) that because of a lack of local programming for the two channels they have here in the Cook Islands, they fill the morning slots with GREAT Australian documentaries on one of the channels, and CNN Live on the other one. So today we watched an Australian documentary about raising children.

I completely re-packed my big golf bag, moving things around and removing some of the heavier items so we don’t repeat the kerfuffle at the airport again (let’s hope it works). Sue read. We walked to the grocery store and got some fresh bread for our lunch sandwiches.

We both had a nap after lunch. It rained on and off, alternating between huge downpours and hot sunshine as quickly as I can type this sentence. Sue packed. The advantage of not buying any souvenirs (or anything else!) is that it all still fit into our two suitcases.

We had happy hour followed by a late supper, although that still didn’t clean out our fridge completely. We left some goodies in there for our hosts. Speaking of which, our hosts, Stan and Tracy, showed up soon after our late supper. They stayed at our place for two hours and we had a very nice visit. Earlier in the day, Tracy had brought two coconuts for us to taste. A popular drink here in the Cook Islands is nu (coconut water) which, according to our hosts, is very healthy and refreshing. I had already tried to poke a few holes in one of the coconuts in the afternoon, but only managed to poke a small hole in my thumb. Now Stan offered to show us how it’s done. He said he usually used a machete for the job, but after whacking it with one of our kitchen knives, he managed to pop the end out of one of them. So we had to try it — and yes, it tasted cool and refreshing and a little bit like ‘weak’ coconut water. 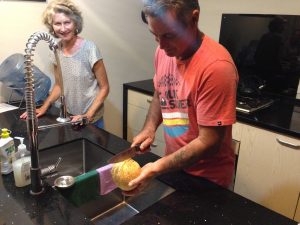 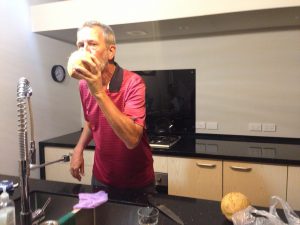 Rudy has a taste.

By the time our hosts had said goodbye, we had barely enough time to close up our suitcases before the taxi was there to take us to the airport. He dropped us off at the end of an already VERY long line-up of sun-burned tourists in flip-flops slowly nudging their assortment of large suitcases closer to the check-in counter. But it was 10:30 at night, the air was pleasantly warm, if not cool, the big jet was waiting on the tarmac for us, and we were going home. The thought of it almost made the hour we spent in the line-up having to listen to an obnoxious couple from Vancouver prattle on and on about THEIR travels bearable.

Our flight took off on time, a minute before April Fool’s Day. I couldn’t help think about how often we’d heard and felt these big jets this last week, as they lifted off the airstrip and just barely cleared the roof of our villa.