The alarm (yes, ALARM) went off early this morning. Sue’s stated goal was for us to be on the road by 6am and she first had to wash and dry the sheets. Actual departure time was 6:30. The van was ‘level full’ from the back to the front. But no squeaks and rattles as we turned east down Hwy #60. We took the same gorgeous road out as we did coming here five months ago — through Globe and Show Low, then through the Gila and El Malpais National Forests of New Mexico on the way to Albuquerque. The plan was to get to Colorado Springs, a 12-hour drive according to Google Maps. 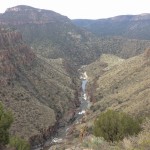 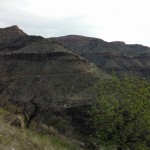 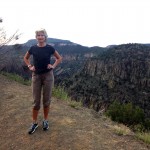 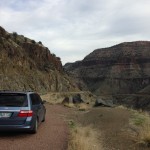 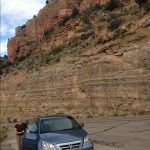 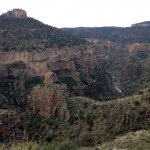 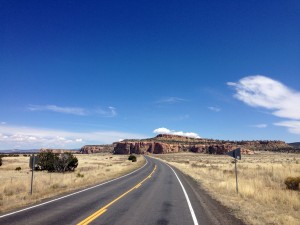 The first half of the drive was absolutely a joy — NO traffic, and great scenery, lots of twists and turns, a cloudy sky that kept the morning sun out of my eyes.

We got to Albuquerque at around 1pm, time for more fuel and lunch. Double filet-o-fish and a strawberry milkshake. And after refuelling the van, Sue got into the driver’s seat. I tuned in the ipod to play some old favorites and even had a little snooze while Sue headed north on the I-25. The scenery was behind us — now all we saw was big fancy casinos. Lots of them. New Mexico is just one big Indian reservation with massive casinos at regular intervals. 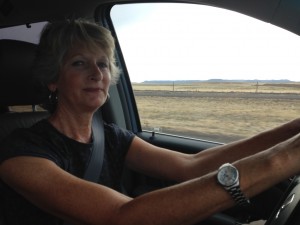 But it gets worse. When I awoke from my nap I looked out the window and saw — gray fields with an occasional plastic bag to break the monotony, stark bare trees, junky farmyards, dirty salted potholed roads, and even filthier cars and trucks driving on that road. We passed (another!) for sale sign and Sue asked, “Who would WANT to live here?” Right.

But the driving was great, especially when I think about the ride home from Florida last year. The eastern state highways were bumper to bumper all the way home. The road here was way less busy. When we hit the Colorado border things looked a bit better again — at least there were the Rockies in the west to distract us from the greyness in the east.

We’d listened to Steve Earle, a pretty good Elton John album, and a good smattering of Dire Straits, when Sue asked whatever happened to “those really nice Leonard Cohen and Adam Cohen CDs we listened to on our drive down to Arizona.” I clicked around on the ipod to find that playlist. When a familiar Leonard Cohen song started playing, Sue leans forward and looks at the radio and says, “Hi Leonard” in a loving voice that I’ve only heard from her on those rare ‘special’ Friday nights! And with Leonard crooning and croaking away on the stereo, Sue was able to stay in the driver’s seat all the way to our hotel!

We checked in, then zipped around to the gas station to fill-up so we’re ready for tomorrow, had a little happy hour in the room, and then walked over to the Hilton next door for supper. It was after 8pm.

Back in the room I looked over our possible routes for tomorrow and wrote my journal. By 11 it was lights out. And THAT’s how I spent my birthday!