Not a lot of interesting things to say today. I was GOING to make bacon and eggs for breakfast this morning, just like Tim taught me to. I had even bought an extra bun at Bashas’ last night just for that. I haven’t had toast and peanut butter with my morning coffee for a over a week now. But I had all that fruit that I bought yesterday and the eggs and bacon would keep for a while longer. Maybe I’ll have that when Dave joins me here on Wednesday. So I had a couple of grapefruits and some grapes and blueberries. And coffee. Maybe I’ll try carving up one of those big ripe mangos for tomorrow’s breakfast.

I drove around the corner to the Gold Canyon golf course at around eleven. Spent an hour at the driving range. Every shot went straight and far. I must be good now. I might have hopped on a cart and golfed a quick round right then and there but it looked to me like the tee times were all booked — the driving range was swarming with young muscled American boys, all ‘warming up’ at the driving range. It sounded like they were here for a weekend of expensive golf. From the ‘conversation’ I overheard in between stupendous drives, a few of these boys should probably have stayed at the fancy hotel they had booked for their little golf weekend — and the rest of them were already 3 or 4 beers in, trying to catch up with their buddies. Well, good for them. I can golf Monday. 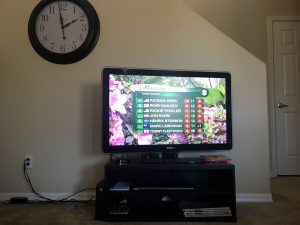 After getting myself good and ‘warmed up’ on the driving range I returned home for a refreshing shower and lunch. Left-over pizza. Even better today than it was yesterday! Since I’m a couple of time-zones behind the folks back home here, the TV broadcast of The Masters had already started by the time I got home. I tuned in and watched the event ‘in progress’. Then I had a FaceTime with Max and Alex who were about to go play in the park because the weather at home was looking a bit better; the snow was starting to melt!

Out in my ‘back yard’ there wasn’t a hint of snow. The course was a lush deep green, the sun was beating down warming things up to 92, the warmest it’s been here so far this year, and the fairway was busy with golfers all afternoon. So I didn’t feel so bad sitting in my air-conditioned living room WATCHING golf on TV. I ‘snacked’ on some more pizza. When the golf on TV was over I had a little siesta. I should probably do that more often! Now I had no problem staying awake in the evening.

Tonight I sat and watched TV — mostly CNN where Anthony Bourdain was eating disgusting local dishes (horse meat and fish guts) from exotic locations around the globe. One of MY highlights of the night was when I remembered that the kids had left behind a partially eaten bag of Cheetos Puffs. I found the bag in one of the cupboards and finished it off. Then I washed most of that bright orange food colouring down with a glass of red wine. Yum. That Anthony Bourdain’s got nothin’ on me.