We woke up after a very good night’s sleep. Since our B&B didn’t seem to include the second ‘B’, we quickly packed up and drove into town to look for breakfast. We found a string of busy cafes and restaurants, picked one, ordered eggs, toast, and coffee and enjoyed a leisurely morning.

After breakfast we went to a gas station and filled up the car. Then to the next door grocery store to stock up on some things we would need now that we’re “settling down” for a few weeks. And then back on the road, back to our new apartment in Napier.

When we arrived the Dickeys were not there. But we’d had an email from them earlier in the morning — telling us where the key was and to just ‘move in’ and make ourselves at home. And that’s what we did.

I parked the car and started to unload. The apartment had had a serious makeover since the last time we saw it. All spic and span. Nice furniture on the front patio, new bedding, new coffee press, everything we might need. So we did what we do best: we clean up and get organized. Sue and I were both VERY happy about what we’ve found here. 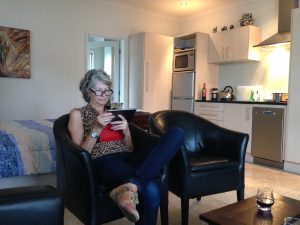 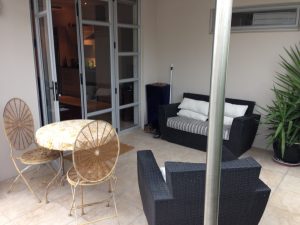 Comfy seating for us outside our apartment.

After everything was in its place Sue made a light snack for us and we sat down for a little happy hour. I was just finished selecting and sorting photos from yesterday’s trek in Tangariro when Graeme came by. He’d just come back from a 50km bike ride, the return trip against a significant wind. But he seemed happy to see us and sat down for a visit. Not long after his wife Robyn appeared — she’d just come back from an all-day golf tournament where she’d lost on the 4th ‘overtime’ hole. She too wanted to hear all about our hike. And both of them wanted to know if there was anything the apartment would need. Well, what about the TV? In their morning email they’d said that they would need to replace the TV, and after checking it out, I’d come to the same conclusion. In fact, I was hoping they’d replace it since it didn’t have an HDMI jack to hook up my AppleTV to. But no, Graeme actually got it going and it looks okay. No, we won’t be watching Netflix on it, but it does get quite a few channels, possibly even the NFL games. And we can watch CBC and Netflix on my computer.

After the Dickeys left Sue made supper: she’d bought a roasted chicken and some nice fresh bread. We each had a corn on the cob to go with that. Great.

After supper we watched the CBC National News on my computer. As good as everything seems to have been going for us, things in America don’t look to be doing the same. Today was Donald Trump’s inauguration. Yikes! I wonder how long that presidency will last. I predict it will be over by this time next year. I just hope he hasn’t wrecked the world, never mind the United States when all is said and done.