It rained all night and it rained all day. What a shame! People come to Napier from far and wide for the Art Deco Festival which started Wednesday and runs until Sunday night. The hotels and B&Bs are all booked up. Robin and Graeme’s B&B guests booked their room in early October. Tents and booths and displays have been going up on Marine Parade since the beginning of the week. The town has been preparing for this for the last couple of weeks — trimming all the hedges and flowers along the main street, fixing up the roads, making everything just-so. Everyone in town is dressed in their ’30s garb. The streets are busy with lovely old cars. The movie theatres are playing old 1930 films. Today there was supposed to be an annual air show, where old airplanes and biplanes entertain crowds out on Marine Parade, the main street along the beach in Napier. But…

It’s raining cats and dogs in Napier today. And the forecast is for more of the same for most of the weekend. We’re told that it NEVER rains on Art Deco Weekend. So, while the rain is badly needed, THIS is not the weekend for it. When Graeme came home from work he stopped by for a drink and then hurried upstairs to shower and change into his Art Deco clothes. And while Robyn worked a shift at the little movie theatre across the road, Graeme offered to walk with us into town to see the air show. Amazingly, the rain had stopped at around 5:30pm and the sun was making its first appearance of the day in the sky out to the west.

We’d walked about a mile down the walk towards town when we passed Graeme’s brother’s home. That’s when we learned that the air show had been cancelled! It was too bad — but who could have guessed that the rain would stop and the sun come out just in time for the evening events? Graeme was VERY disappointed. We decided to walk back the other way — back past our place and go to the harbour where there would be the ‘official’ opening ceremonies on a big ‘Maori’ ship and a traditional Maori show. But when we got there there was nothing! Cancelled, too. Well, if we’d known that…

What to do? We decided to head back into the town centre. (We certainly were getting our walk in!) When we passed Graeme’s brother’s place he offered to give us a ride into town. The main street, Marine Parade, had been closed to traffic at either end, and there wasn’t any parking available on the side streets. He dropped us off and we would take the bus back later.

A big jazz orchestra was playing at ‘the shell’ — a large outdoor permanent concert stage on the parade. The streets were filled with men in suspenders and bowler hats, women in flapper dresses and fancy feathered hats, even children all dressed up and enjoying the party. According to Graeme, not NEARLY as many people as they usually have, but impressive all the same. 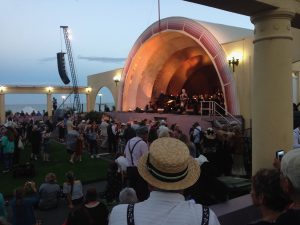 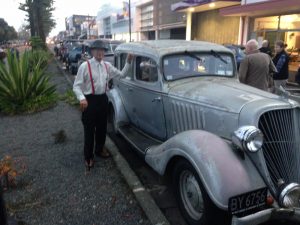 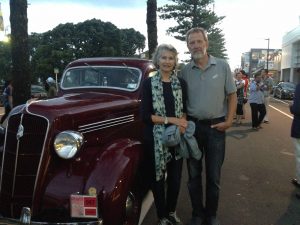 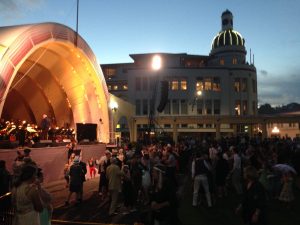 The main street had old cars parked along both sides. Graeme said that many of the cars ‘do the circuit’ — where their proud owners have the cars shipped here from Europe and America just to show them off at these kinds of events.

We watched the big band play as old and young people did the Charleston in the concert shell. Then Robyn showed up, having finished her shift at the theatre, and we all had ice creams and strolled around some of the side streets. 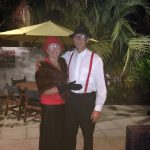 And then it was time to go home. Robyn had brought the car and parked about a mile from the town centre. We drove home and had one last glass of wine with the Dickeys. We’d had a lovely evening. We’ve had a lovely five weeks in Napier. We’ll say goodbye tomorrow and then head down to Wellington for a few days before crossing the channel over to the South Island.