I’m writing this while lying in bed in my tent in the middle of the Namibian desert. Mosquito netting around the bed, fan whirling overhead.

We had a lovely omelet (cheese, mushroom, tomato, bacon) for breakfast at the House on Olof Palme hotel in Windhoek. I managed to connect my iPhone to the USB port in our Ford Ranger truck before we headed out for our long journey out to the Kulala Lodge in the desert at Sossusvlei. That seemed to work very well, even providing us with music from my iTunes music library along the way. We missed a turnoff as we exited the city, but google maps led us back to the correct road in no time. We were expecting pretty good roads for most of our trip, but had been warned that the last few kilometers would require our “four-wheel-drive” option. So we were a little surprised when we found ourselves on gravel roads almost the minute we left the city. But that’s how it was today — gravel roads all the way. Five and a half, or maybe even closer to six hours of bouncing and jouncing our way on desolate gravel roads across what turns out to be a VERY large country! 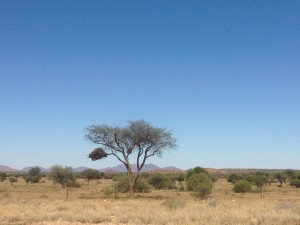 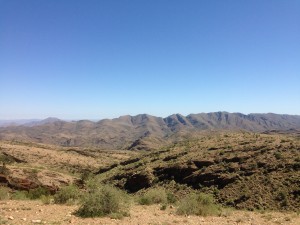 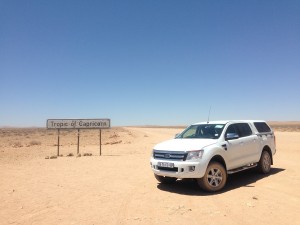 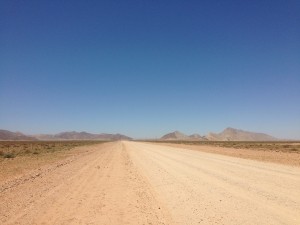 I drove for the first section. The drive was actually not at all bad because the terrain and the scenery was so very interesting. We saw lots of baboons and kudos and other wild animals along the way. We went over a couple of winding mountain passes too. And we saw only a very few other vehicles on our road — and while that made cruising along at 100kms/hr okay, it also made you wonder what we would do in case of a breakdown. 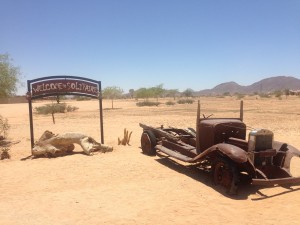 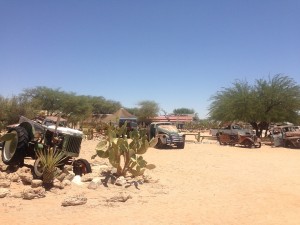 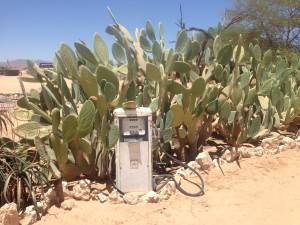 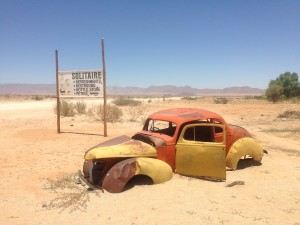 We finally got to a service center and lunch break at around 1:30. At a corner named “Solitaire” there were gas pumps (we’ll wait to fill up our diesel truck on the return trip) and a small bakery. Freshly-baked desserts and drinks and we were refreshed enough to continue our cross-country bouncing.

We were getting close — our GPS was telling us that we were only 200 meters from our destination– but when we drove through the gates of what we thought was “our place” the security guard informed us that it was another 30kms to the Kalala resort. The final 20kms were indeed a bit rougher as we followed a single lane, lined on either side of the road by sharp rocks that had been painstakingly laid to act as a curb.

And then we arrived. Two people came out to meet us in our truck, offering wet towels and a glass of ginger beer as a welcome. We parked our truck and took our very dusty suitcases out of the truck box. We were led into the reception area and “Stella” introduced herself and gave us a little introductory talk. Then we were shown to our lodges. Very cool. Well actually, it was still very hot outside. But the lodges were ridiculously well-appointed for where we were in such a remote part of the world. 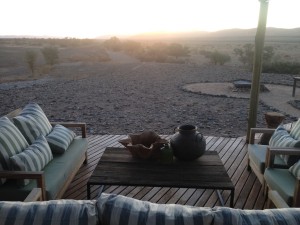 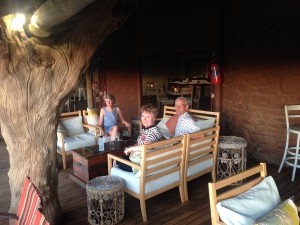 Soon we were back in the main building, enjoying a cool draft beer and looking out at the red dunes in the distance. After a short afternoon nap and a refreshing shower we were back in the lounge for a sundowner gin and tonic and a visit with one of the managers. Our guide for tomorrow morning’s early excursion to the sand dunes also came by to introduce himself to us.

Dinner was excellent. Although a chicken dish was also an option, all four of us opted for the “game steak” (kudu) dish. Starter, main course, wine, dessert and coffee. All very good–as was the conversation around the dinner table.

By ten o’clock we were all back in our cabins, getting ready for an early wake up tomorrow morning. I took half an hour to write my journal even though I’d have to wait for a better internet connection to post it. And then, lights out.