After one last great night’s sleep in New Zealand we spent today morning packing and cleaning up. Typically, Sue worried quite a bit about not being able to fit everything into our two suitcases. But when all was said and done, everything got packed and my backpack was mostly empty.

Our hosts are Seventh Day Adventists and had gone to church this morning. We had asked if it was okay for us to stay until noon. And so, after an early lunch, we loaded up the car and headed for Auckland.

The half hour trip on the main freeway took double that — rush-hour bumper-to-bumper traffic heading into town. What’s the big deal? Adelle. What else. Must be an afternoon concert.

We “petrolled” up the car and returned it to the Rent-a-Dent dealership in Manakau. The same young kid, John, who had delivered the car to us in Bethlehem three months ago was manning the fort. He looked over the car and pronounced it okay. I asked him if he wouldn’t mind taking us to the airport. Well, no, too busy and short staffed. I checked to see if Uber was an option. No cars available. I asked John again. Well, they charge $25 for that service. Deal.

Fifteen minutes later we said thanks and goodbye to John at the airport. We checked our two suitcases in at the counter and then headed to the oversize bag check-in. Oh, oh. Problem. We are 3 kilos overweight. Remove something or pay $120 extra fee. No point arguing with this guy either. So we take that honkin’ big bag (with TWO sets of clubs and TWO golf bags and FOUR pairs of shoes) off the conveyor and open it up. So much for how nicely I’d wrapped the whole contraption in assorted colours and lengths of bungee cords. Out came the shoes, one pair at a time, onto the scale. All four pairs added up to three and a half kilograms. Close her back up and drag her to the guy at the baggage counter. Yup, that’s okay now. Shoot, I’m all tuckered out and sweaty and we still have a long day ahead of us.

Now we’re shopping for a big shopping bag to haul our shoes in. Too bad we didn’t think of this a bit earlier — I had a big shopping bag packed into the golf bag. Fancy “New Zealand” bags here in the airport shops are $19.00! Oh well, what choice do we have? It’s only money. But then, 5 minutes after we’ve gone through customs, I realize I’ve forgotten to collect that brand new “shoe” bag from the X-ray screening counter! We start running back to the customs gate. Of course I’d already forgotten what colour our new bag was. But as we approach the gate we spot a customs agent holding our bright green shoe bag and looking for the owners. Whew! Yeah, but there’s a slight problem. He opens the bag and starts looking through the shoes. Aha! There’s an aerosol can in one of the shoes. Confiscated. Shoot! That was Tim’s sunscreen, left behind after our golf game in Hawaii. Too late now.

After all the fuss and bother, the rest of our trip to Rarotonga went off without a hitch. Almost. It turns out that our plane, which was scheduled to fly from Auckland to the Cook Islands and then to L.A. had already flown an extra leg BEFORE our flight and with the extra cleaning, etc, it would be at least half an hour late loading us. So our arrival in Rarotonga will be closer to 11pm than 10. Not too big of a deal. But the REASON for the extra flight? ADELLE! Again! New Zealand Air added a flight for Adelle fans who were flying in from Christchurch.

At around 10:45pm we landed and then stood in the customs line-up for the better part of an hour. But once we reached the desk things went quickly. We were directed to have our luggage checked, so once again, I had to open up our new green ‘shoe bag’ and show the friendly bag-checkers that we had no New Zealand dirt or sheep shit on them. Okay. Re-pack. Taxi. Our man is waiting for us. We load our 3 very heavy bags into his van and join one other tourist for the ride out of the airport.

Our villa is about 3kms from the airport! The taxi turns down a little side road and drives through what appears to be the front lawns of several homes before he pulls up right in front of a large lit-up beautiful house. He turns around and looks at us: “This is your place.” What? Really? It didn’t look like this in the photos. The other passenger looks at us and says she wishes she was in a place like this. Where is her place? Oh, she’s staying quite a way out through town, at a backpacker’s hostel.

Taxi driver lugs our bags from his van onto the deck. “Goodnight.” We still don’t quite believe this is the right place. In the wet (it must have rained all evening) darkness of the midnight, this big 2-bedroom brand new home with its large windows and all the lights turned on looks like Shangri-La. 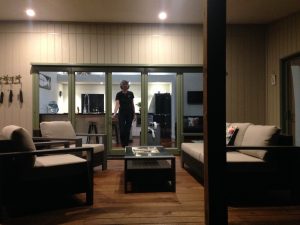 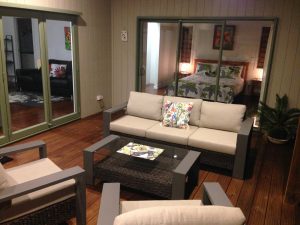 Of course, we ARE on a little island in the middle of the Pacific. And there is no internet here. And the TV has ONE grainy channel showing a cricket match. And we are SOAKED in sweat without doing anything — and it’s the middle of the night! But this is our place for the next week. Good thing I brought a book along. Don’t think we’ll be moving around much, never mind hiking up mountains or through forests.

We open our suitcases on the spare bedroom bed, put on our shorts and t-shirts, and have a welcome drink on the large patio. Then we call it a night. What a Saturday it was. And to think that tomorrow we get to do Saturday all over again!