But if we hope for what we do not see, we wait for it with patience. Romans 8:25

It’s “moving” day. Today we take a four-and-a-half hour bus ride from Merida to Cancun. When I got downstairs this morning MaryLou was sitting on the couch with her computer, surrounded by luggage. Two huge golf travel bags took up prime space in the middle of the floor. I made one last pot of drip coffee and ate a bit of yogurt. I took out the garbage. The three of us sat around for a while, waiting. Was it too early to book our Ubers? According to Dave’s googling, there was a breakfast place near the bus station at Altavista. We could get our rides to the bus station, and then one of us could watch the bags while the others went for breakfast. With all our big heavy bags we would need two taxis, maybe even three. At around 8 o’clock Dave and I each ordered an Uber.

We’ve almost always booked our taxi to pick us up at the front gate, so we need to walk for about a kilometre to meet our driver. We do that because often the price is a bit cheaper, but mostly because it is a hassle for Uber drivers to get through the high security at our front gate, and then it can be a bit tricky to find our apartment. The route that google maps suggests inside our country club is a long way around even though there is a shorter more direct route. And our house is at a corner with a hard-to-find house number. So it’s faster for us to just walk to the gate. But this morning, with all our luggage, that was not an option.

“My” Uber car arrived first. I loaded my clubs into the back seat and put the Driedgers big suitcase in the trunk. And off we were. I was at the bus station by 8:30, an hour before our departure time. I waited for the Driedgers to join me. And waited. They were supposed to be right behind me. Nine o’clock. Still waiting. Finally, at 9:10, they pulled up on the parking lot. After circling around in the country club for 10 minutes, not able to find our apartment, their first Uber had abruptly cancelled and left. When the second Uber showed up and started doing the same thing, Dave started running around, trying to chase the car down, which he finally managed to do. Of course the golf bag didn’t fit in the small car’s trunk, so Dave had to sit in the back seat with that big bag over his lap for the ride to the bus station. By the time they arrived they were visibly frazzled. What an exercise in frustration! And now there was no time for a nice morning coffee. Dave ran across the street to the Oxxo convenience store and came back with a couple of Kitkats and a small package with four mini-donuts. So much for our breakfast. 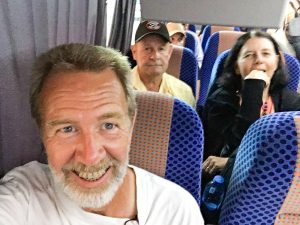 The bus ride was uneventful. Long. Air-conditioned. Loud Spanish movies playing on the TV. The nice elderly Spanish lady sitting beside me kept ‘helping’ me fill in the sudoku puzzles I was working on.

At 2:30 we arrived at the bus station in downtown Cancun. We picked up our bags and dragged them into the main hall. I soon found the booth where I could buy bus tickets to the Cancun airport. It was leaving in 10 minutes. Great. Not a long wait — certainly not long enough for me to get in line at the little Subway booth and order a “Milanesa de Pollo” sub sandwich! No breakfast, no lunch!

The bus down to the airport was a half-hour ride. On the way there I called the Courtyard hotel where Dave had booked a couple of rooms for us for tonight and asked where at the airport we might find the free hotel shuttle. Terminal 3, gate 26, I was told. I asked how often the bus comes around and was told the wait would be between 5 and 30 minutes. Great! I was hoping for five!

Our bus stopped at Terminal 4 first. Then Terminal 2. Finally, with only the Driedgers and me still on the bus, we got to Terminal 3. We got our bags and hurried to gate 26. Was the big white shuttle bus parked in stall 26 ours? There were rows and rows of shuttle buses and taxis and lots of tourists mulling around on the big parking lot. I checked with one of the porters. Nope, not this bus. But soon — 10 or 15 minutes.

When our shuttle still hadn’t arrived after 20 minutes, we asked again. Yes, it is coming — 10 minutes. That continued for more than an hour. At one point Dave called the hotel, just to confirm that the bus was coming. Yes, it will be there in 10 minutes.

Eventually our shuttle DID come. We piled our massive bags on top of the small black leather luggage neatly stacked in the back of the van and joined a nattily dressed flight crew for the short ride to the Courtyard hotel. Check-in was quick and painless. We hauled our gear up to our rooms and half-an-hour later we were sitting at a table on the restaurant patio, next to the outdoor pool, ordering our breakfast/lunch/supper. The air was lovely — not as hot as Merida, with an ocean breeze under a cloudy sky. Our dinners were lovely too, albeit quite a bit more expensive than what we’ve become accustomed to in Merida. Well, this IS an airport hotel in a resort town. And we’ve had a long day. Worth it.

After dinner the Driedgers enjoyed some time in the outdoor hot tub. I went up to my room and flicked through the channels on the TV. Dave came by for a beer at around 8:30 but didn’t stay long — he was tired and it was time for bed. We’ll meet for breakfast tomorrow morning. The Driedgers’ flight is scheduled to leave before noon; mine four hours later. Well, that’s what we are HOPING will happen. When travelling, it’s better to be flexible and exercise patience!