This morning, Sue read while I checked up on the latest Trump news. The wind had been howling again last night, and it was STILL blowing like crazy. But at least the rain had stopped and the sun was shining. The forecast said cool and very windy. That’s what it was.

For lunch I went to a sushi place not far from our motel and picked up two trays of assorted pretty morsels. I was bugging Sue that we should go golfing, maybe it wouldn’t be that windy down by the ocean, and we could wear long pants and jackets if it was a bit cool. Sue wasn’t keen on that. But we WERE starting to go a little stir-crazy just sitting around. 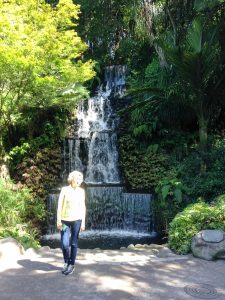 We got into the car and stopped in at one of the big grocery stores. Then we drove just a couple of blocks out of town to the Pukekura Park. This ‘botanical’ park was one of three that the lady at the i-Site had suggested we visit. We parked in the parking lot and selected one of the paths to go for an afternoon stroll. And we weren’t the only ones who’d had that idea. Lots of older people and moms with their prams and joggers were enjoying the shelter from the wind there in the park. 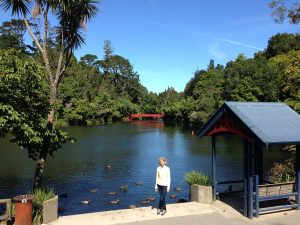 Paved pathways wound around the big trees and lovely king ferns and gardens of rhododendrons and ponds with quacking ducks and Japanese-style pagodas and pretty bridges. In the middle was a ‘tea house’ where most of them eventually wound up to enjoy a coffee or an ice cream cone. We sat in the sun for a while until my pestering finally wore Sue down and we went back to the car and headed for the golf course.

There was one old guy standing at the clubhouse door and a foursome chipping onto the 18th green when we teed off. Not bad, here in the valley, in the shelter of the clubhouse. Sun was shining. I took off my sweater. Off to a terrible start, both of us, but they got better. Well, the GAME got better, but the wind did not. It was HOWLING whenever we got to a tee box that was up on one of the hills on the course — and it is a hilly course. The bonus was that the sky was clear and bright blue — and we finally (first time since we got into town more than a week ago) got a great view of the big mountain that dominates the Taranaki area. 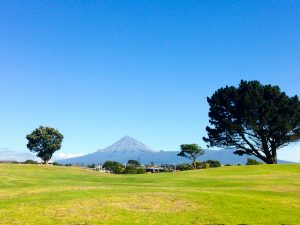 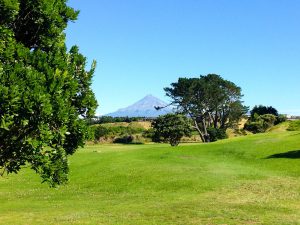 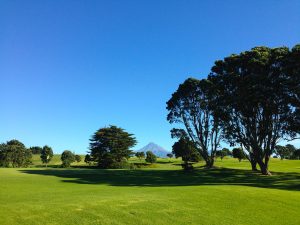 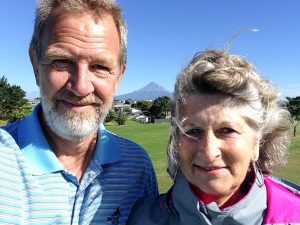 We finished golfing at 6:30 and headed back to our place. We had our leftover Nasi Goreng for supper and watched a bit of TV. I was wiped, what with all the wind and the exercise we had today. I barely made it through the CBC National and was asleep before ten. Didn’t have the energy to write my journal — so I wrote it the next morning.