It’s 6 in the morning. I’m finished sleeping. That’s what I get for going to sleep at 9:30. Oh well, might as well make some coffee. Max and Alex will be up at quarter to seven. I have a few minutes to upload my photos from yesterday.

It’s not raining today, but I’m still a little concerned about our A/C unit outside. It’s completely frosted up and it’s running full time. After breakfast I get out the garden hose and give it a good hosing down to clear off the ice. Then I turn off the furnace so that while we go on our morning hike out to Silly Mountain, the unit can dry off and hopefully get back on track.

Tim watches over things at home while the rest of us drive out to Silly Mountain. Sue and Alex go hiking up to the top while Max and I stay at the base and wander around the ‘cactus walk’. I decide to take some photos for Max to look at once he’s home. He’s so good at identifying the different varieties — maybe he can look at some photos and recall the names. I didn’t get a photo of the ‘Elephant Ear Cactus’, but I got most of the other ones that Max has come to know. 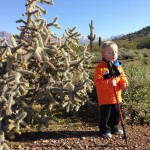 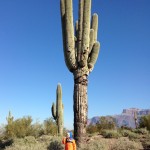 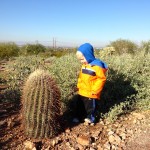 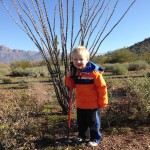 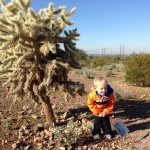 After the hike we stopped at Bashas so the girls could pick up some groceries. While they did that Max rode his Strider bike around the parking lot.

After lunch back at the house, I called the golf course to see if we were still on for our 1:00 tee time. Oh no — two and a half hour delay because the big frost last night! Well, that way we won’t even get our game finished before dark! What to do? We decided to go to the course at one and hit some balls on the driving range. Maybe there would be some cancellations and we’d still get on. 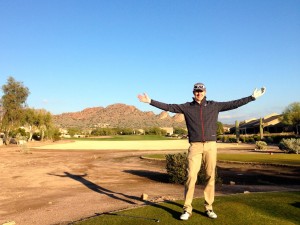 When we to the course we were welcomed by the crew. And yes, if we were ready, we could head out to number one tee right away — before anyone else showed up. Okay! We zipped out to the tee — there was a foursome ahead of us but no one behind us. And the sun was shining. It was cold, but we felt lucky to get one last game in.

And what a start we had. I parred four of the first five holes, and could have easily had a couple more! Tim shot a 45 on the front nine, I shot a 43. 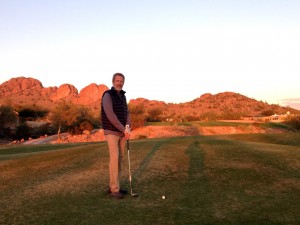 Things fell apart for me on the back nine. Tim finished with a 49 on the back nine, but a couple of eights and a nine (and a seven and two sixes!) wrecked what might have been my best round ever. Still, when we bogeyed the final hole at around 5:30, with a big red sun sinking in the west and a nearly full moon rising in the east, we felt great about the afternoon.

Tim and Alex bought a couple of pizzas from the Hitching Post for our supper. Great! Last meal together. Max entertained himself (and all of us) by playing with his toys on the carpet in the living room. At around 8 o’clock Tim gave him his bath and read him his bedtime story. He came and gave us each a big goodnight hug. We’re supposed to be up tomorrow at six, ready to take them to the airport.

A bit of champagne and some sweet snacks for the rest of us.