We checked out of our hotel in Nelson by ten o’clock this morning. We met Phil, the owner-manager, walking by as we were carrying our suitcases out to the car. I was going to return the book I’d borrowed from the front desk — I wasn’t quite half-finished it — but he said to just keep it. Great. That will give me something to do on the over 3-hour ferry ride this afternoon.

We drove to Picton via the picturesque winding road across the northern part of the South Island. It was Saturday morning and there was a huge cycling event going on — we passed hundreds of cyclists along the way. There is an awareness and a respect for cyclists here in New Zealand — so even when the roads are quite narrow two-lane highways, with lots of trucks and camper vans winding their way up and down around the hills, everyone gives cyclists room, even when it’s a peloton of a dozen or more in a group. Once we got closer to Picton we were once again in wine country — beautiful rolling hills with rows upon rows of grapes stretching as far as we could see in all directions.

Once in Picton, the road led us straight down to the harbour and the ferries. We parked beside the road for an hour — we were too early to load yet — and went to a small bakery to buy some lunch. Pastry and meat pies. Sunny and warm on the picnic table outside. Surrounded by backpacker hotels and backpackers waiting for the next ferry. 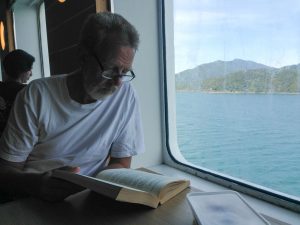 At 1 o’clock we lined up to drive onto our ferry. It’s all very efficient. We parked and took our books and extra sandwiches up to the 8th level and found a table next to one of the big windows. And sat and read while we sailed across Cook Strait up to Wellington.

The journey was smooth and seemed shorter than the trip the other way a couple of weeks ago. We drove off the ferry at around 6pm. In no time we were on the #1 highway that leads from here all the way to the northern tip of the island. The drive to Palmerston North took us just under 2 hours. It was cloudy and looked like it might rain, but it didn’t. The first half of the trip followed the western shoreline and the views were spectacular, with the sun setting in the sea and lighting up the hills on our right. There was a brand new 4-lane highway for the first hour — so new that our google maps thought we were in the middle of nowhere and kept spinning around and suggesting places for us to turn left or right in order to find a road for us!

We found the hotel we’d booked for 2 nights and checked in. We were surprised and disappointed to learn that this 6- or 8-storey hotel didn’t include free wifi! Why is wifi free everywhere except in “better” (more expensive) hotels? We’ll be looking for an alternate hotel tomorrow.

So instead of gazing into our devices all evening, we had crackers and cheese and sausage and a glass of wine while we scanned through the TV channels. And I read a few more chapters in my book! And now it’s 11:30 and it’s time to close up my laptop and go to sleep.