Woke up just before 7:00 to the sound of my phone ringing in the kitchen. What’s up? It’s still dark here. I answered the FaceTime call — it’s Max, sitting at his breakfast table, eating pancakes, and giving Opa a call. They’re coming to visit in Phoenix real soon! A great ‘wake-up’ call.

Scrambled eggs for breakfast. No, it’s not Saturday, but the Christmas hamper from the Peters had another dozen eggs in it so we had to celebrate.

After breakfast I worked on some websites for a couple of hours. Sue did her exercises and laundry. It was another beautiful day here, 10 degrees above normal. 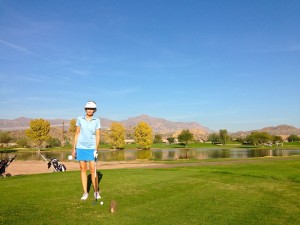 After lunch Sue took her putter and marched across the road to the Gold Canyon putting green to ‘practice’ her putting. She’s of the opinion that practicing on OUR little putting green in the backyard doesn’t help anything. We’ll see. I putted in the backyard — got 3 in a row in quite a few times, but that fourth ball just won’t listen.

At around 2:45 we went to Mountain Brook — we had a 3:15 tee time. It was a slow day at the course, and as we drove there we noticed that there was no one on hole 9. So we asked if we could walk the BACK nine today, and they said okay. So that’s what we did. 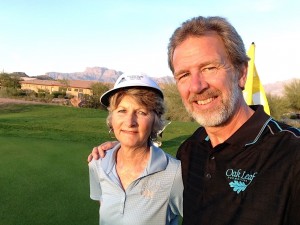 We both had only good drives! Really good drives! It must be Sue’s driver which we are ‘sharing’. Now if only all that putting practice would pay off on the greens. But no, after a fun time walking the back nine, we finished with a 50 for me, 55 for Sue. And it’s the putting that’s letting us down. We threw our clubs into the van and headed to the grocery store. As we drove there Sue announced that the best way to improve would be to NOT practice, to NOT go golfing every day — all that practice actually HINDERS your progress!

We bought a couple of steaks at Bashas and went home to barbecue. The evening was warm, the sun setting on the mountain. After supper we watched a movie I’d downloaded, “The Immigrant”. Too bad my download didn’t include subtitles for all the Polish parts of the movie! But I think we ‘got’ most of it. We followed that up with the pilot episode of “Suits”. That was good, too. We tried to keep our eyes open long enough to watch Jon Stewart and then to bed.

One more thing: Sue reminded me that I hadn’t said anything in yesterday’s entry about the news of her friend Phyllis, so I’ll add that here. My sister Irmy invited Sue to join her Winnipeg bookclub (Harafish) about 15 years ago. The other 5 or 6 members were mostly librarians. Phyllis was one of them. The group met once a month. At their October meeting, just before we left for the winter, they were surprised that Phyllis didn’t attend. They found out the next day that Phyllis had had a stroke, and was in the hospital. The stroke had affected her one side and she’d lost her ability to speak. And for the next month Irmy would send us updates to tell us how she was doing. It looked like things were getting a bit better at first, but in the last week Phyllis was not making progress. Then, yesterday at noon, Sue got an email from Irmy that Phyllis had died that morning! Quite a shock. Phyllis was 60 years old, younger than Sue. She was still working but so looking forward to retiring and seeing more of the world. (We’d stayed at her son Peter’s apartment in Paris a year ago.) And now she is gone. R.I.P., Phyllis. Just another reminder that we need to take the opportunities to do what we want to do while we still can. And if that’s golfing in Arizona for the winter then that’s what we should do.