Wow! Thirteen hours after going to bed, we finally rolled out of bed this morning at 11:00am. I woke up once at 5:30 and thought to myself, ‘Not bad’ — but instead of getting up, I turned over and went right back to sleep. And if I hadn’t got up when I did, Sue probably would have slept for a few more hours!

I showered and got dressed. Then, while Sue made coffee and showered, I went out to the corner bakery and came back with a crusty baguette for Sue and a chocolate-filled pastry for me. Good breakfast! We sat around and read some of Peter’s Paris tourist books and talked about where to go in the afternoon. We almost left once, but when I looked out the window I saw it was raining. Oh well, we’re here for a month! More reading. Finally at around 4pm we left. Headed for the Sacré-CÅ“ur, a famous big old catholic church up on the highest hill in Paris. Not far from our place here in Montmarte. I looked at google maps to figure out the walk there. We would be climbing quite a few steps up to the top. 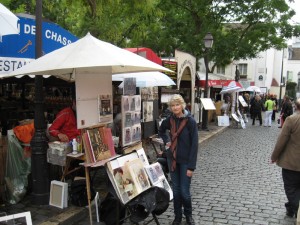 Along the way we stopped at the Place du Tertre, a square not far from Sacré-CÅ“ur, famous for the artists that sit in the square and do portraits of/for tourists. Sue and Alex had their portrait done by one of these artists when they visited Paris 14 years ago. No time for posing today, other than for a photo. We continued on up the hill to the church. 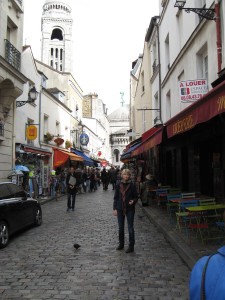 There were lots of tourist shops and cafes, and a surprising number of tourists, considering the time of year and the cloudy/showery day. But the climb had warmed us up a bit and we thought the temperature was probably “very perfect” for this kind of outing. 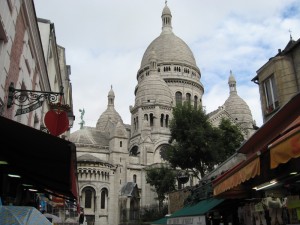 And it didn’t take long for us to reach the church — it really is only about a 10-minute walk from our apartment. We walked around the outside. 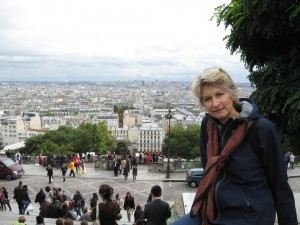 We had a spectacular panoramic view of the city of Paris, which is mostly to the south of the basilica. Although it was overcast, we could spot many of the famous landmarks of the city from this vantage. And then it started to rain. 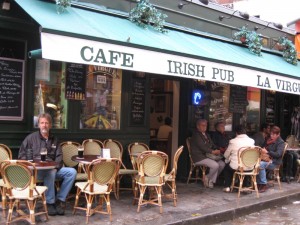 So instead of getting all wet, we opted to get under the awning of that Irish pub we passed on the way here. And why not sit down and have a Guinness while we watch tourists filing by for an hour or so? So for 17 Euros (about $24 Canadian) we had ourselves a Guinness and stayed out of the rain. We were almost all the way back down all those steps when Sue remembered that she had left our backpack under the chair at the pub. So we warmed up a bit more by running all the way back up — picked up the backpack from where we’d left it! and headed back down.

We got back to Montmarte close to suppertime and so we stopped at a cafe just around the corner from our place and ordered a pizza to go. Back at the ranch, we sat down in front of the TV and had our pizza and a bottle of wine. We’d found a big library of DVDs in Peter’s bookshelf, many of them with a Paris theme. So we have some movie-watching to do. Tonight we watched “Paris, je t’aime”, a 2006 movie made up of 18 short films, each by a different director and cast, and each one filmed in one of the arrondissements (districts) of Paris. It was okay! I guess the jet lag isn’t quite done with us yet, as we both were tired and tempted to go to sleep. But we stuck it out, and then, after the movie was over, Sue read and I got busy on my blog for the next few hours. And by midnight we were still both up, and awake, and not really tired. But by 1:00 we put away our distractions and went to bed.