I got up at 7am and watched nearly three quarters of the Miami-Pittsburg Wildcard playoff game on TV. at 9:15 we left, headed into Auckland to pick up Brian, Val, and Scott Funk at their hotel near the waterfront in Auckland. Then we drove to the Yacht Club, about 5 minutes east, where we parked the van and prepared to embark on our day-sail adventure. We could see the Trinity, the tri-hulled catamaran, moored out in the bay, not far from the dock. A small dingy was headed our way. Kevin Palmer introduced himself as we piled into the small boat. It took two trips to get the five of us aboard Trinity. There we were introduced to the captain’s wife Terri, and Cody, one of their 3 children who would be sailing with us today.

The trip out of the harbour was fine. Although it was cool and partly cloudy, the 35kph winds were behind us, as we headed out. I got to hold the wheel for part of the journey. After about one and a half hours we anchored the boat in a small bay on the lee side of Motuihe Island. We got out our sandwiches and had lunch on the boat. Scott and Val got into their swimsuits and braved the cold waters. Val even swam to shore while the rest of us took the dingy to the island to do some exploring. 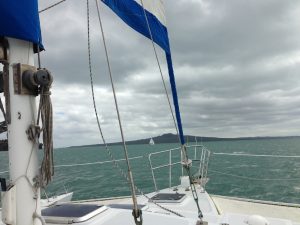 Leaving the harbour in Auckland, about to unfurl the jib, with lots of wind behind us. 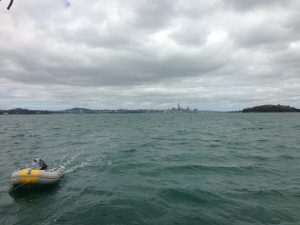 Our dingy trails behind the tri-hull, and the city of Auckland (with its landmark Skytower) in the distance. 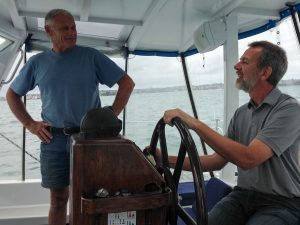 Captain Kevin Palmer gives Rudy a chance at the helm. 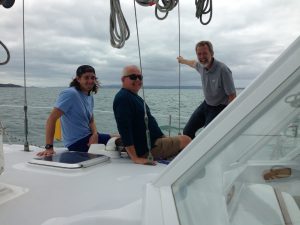 Scott, his dad Brian, and Rudy. 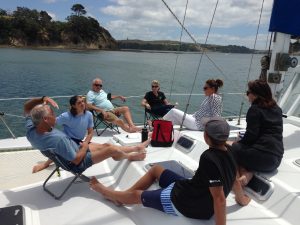 We anchored in Takutairaroa Bay, on the east side of Motuihe Island and had lunch. 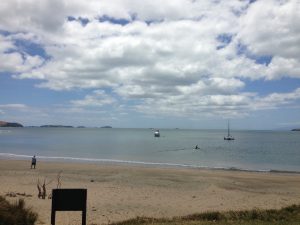 Then the dingy ‘ferried’ us to the island for some exploring. (That’s our boat, Trinity, the three-hulled catamaran, out in the bay.) 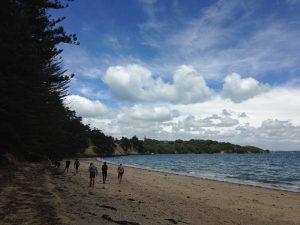 We walked across the isthmus and took a long walk along the beach. 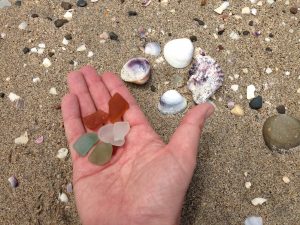 We looked for ‘sea glass’ on the beach. (Broken bits of glass bottles and containers that have been buffeted smooth by the sea and sand.)

The pÅhutukawa tree, also known as the New Zealand Christmas tree, is famous for its vibrant red flowers and its ability to survive even perched on rocky, precarious cliffs. 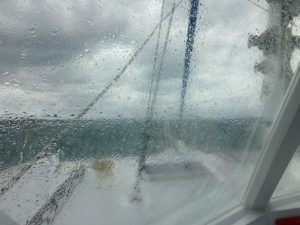 The return trip pointed the boat directly into the wind. The diesel engine shortened the 3 hour sail to a 1 hour boat ride. 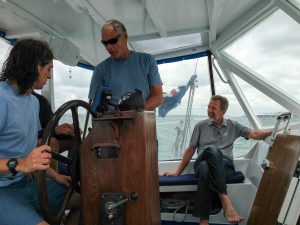 We sat comfortably in the closed in ‘cabin’ while Scott took the wheel. 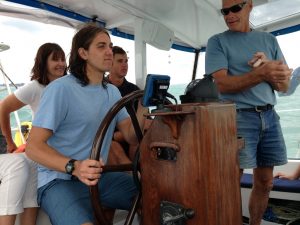 Kevin’s wife Terri, son Cody, and Kevin watch as Scott navigates us to the mooring. It was Kevin and Terri’s 29th anniversary this day.

We took a long slow walk along the beach, looking for bits of ‘sea glass’, colourful pieces of broken bottles and other glass objects that had washed up onto the beach. Sue came home with a (heavy) jacket pocket full of white, green, and red ‘gems’.

A little after 3 o’clock we were back on the boat, ready to head back. Now we were pointing directly into the wind. Rather than tack for 3 hours, Kevin decided to zip up the windows around the cockpit and we all sat comfortably while the diesel engine putted us back with Scott at the wheel. At times the bow of the ship dipped into an oncoming wave and water washed across the deck from bow to stern! But we stayed dry.

We said thanks and farewell and wished Kevin and Terri a happy twenty-ninth anniversary. Then we drove back to the Funks’ hotel and said goodbye to them. They are staying for a couple more nights, but we expect we’ll be meeting them real soon somewhere down the road.

Back in our neighbourhood we stopped at the fish and chips place to pick up supper before going to the apartment. My football games were over — and although you’d think that everything is upside-down when you’re ‘down under’, unfortunately the final score did NOT favour my underdog New York Giants this time around. Now it’s up to the Cowboys to stop Green Bay.

After supper we watched news and Sue did laundry. It’s our last night here. I made the most of it and fell asleep by 9 o’clock, sitting on the couch. Tomorrow we are heading down to Tauranga where the weather is supposed to be beautiful!