I was going to call this post “Body Parts”. Or maybe “Bawdy Parts”.

We went golfing at the Metropolitan again this morning. Most often we have found that a big part of our golf games here is that we get to meet new and interesting people. Almost without fail. But not ALWAYS. This morning we were paired up with Yuri and Elena. They thought they were going to golf by themselves, but at the last minute the starter asked them to allow Sue and me to join them. I think they were disappointed. The weather conditions were absolutely ideal this morning: sunny, a light breeze, not too cold, not too warm. Perfect. Our golf partners were the opposite. They were Russians. They were VERY rich. Yuri (age 54) owns quite a lot of high-end commercial real estate in Moscow. He was proud to show me his membership medallion for the Skolkovo Golf Club, a new, very expensive, very exclusive, world-class golf resort in the heart of Moscow. He and his wife (“second marriage,” he explains) Elena (age 34) own two homes; one on the golf course in Moscow, the other on the Spanish island of Majorca, right on the ocean, again, on a golf course. They are staying at the One&Only, a $1300/night luxury hotel here at the Waterfront in Cape Town. Yuri is a typical Russian: red face, wide shoulders, big paunch, no neck, gold chain, constantly smoking expensive cigars, loves to drive the ball a mile. Elena is gorgeous! Beautiful face, beautiful figure. Luminescent skin, freckles on her cheeks, hair tied back in a ponytail, immaculately dressed with an enormous gold-chained purse hanging from her rented pull-cart. When she addresses the ball she wiggles herself into place, plants her feet firmly in a wide stance, ‘twerks’ out her butt in that little skirt of hers, and squeezes out a little more cleavage as she puts her elbows together and bends over the ball. She too has a big golf swing, although I found it a challenge to follow the flight of the ball — I was too distracted watching her line up to hit it! (Sue later claimed that some of Elena’s best assets were “not original parts”, but they looked okay to me.) Elena and Yuri may have been rich and beautiful (okay, Yuri wasn’t at all beautiful) but they were not fun to golf with. They spoke very little English and only when spoken to. They looked unhappy. As PJ Reimer once said to me many years ago, the Russian people are a ‘grim’ people who go through the day looking glum and even sullen. They look joyless. We couldn’t wait to finish our game and get out of there. (Shooting my worst golf score EVER may have contributed to my feelings about the morning — maybe I just wasn’t focusing on my game?)

We hurried home and showered and had lunch. Then we hopped back into the car and back onto the N1 freeway, heading back to Franschhoek. The drive was just over an hour. We stopped to buy flowers and chocolates in the town before winding our way through 4 or 5 miles of bumpy narrow back roads up into the countryside where Graham and Paddy Howes live. Back to Bird Cottage, the little house in the middle of a vineyard where Sue and I stayed in December 2001. Our friend Shirley Martens had organized an afternoon coffee with the Howes and us. A chance for us to reconnect after 15 years.

Graham (who couldn’t make this reunion work yesterday because he was at the dentist) was not home when we arrived. Shirley and Paddy were in the kitchen getting lunch ready. We took trays of bread, cheese, and coffee out onto the ‘stoep‘, the front porch. Paddy looked just as she did 15 years ago. It was great to see her. She is in her mid-seventies and she told us she’d had her hip replaced 4 times since we last saw her. (See what I mean about body parts?) She moved a little slower, no longer did pottery in her studio, but still kept active. Her children and grandchildren live nearby so she’s busy with that. And she does a lot of photography and she paints. 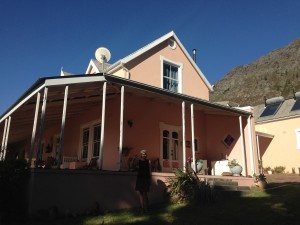 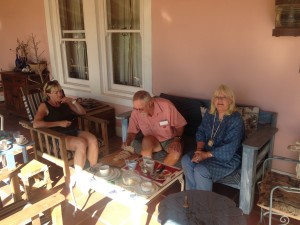 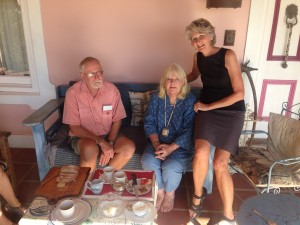 We hadn’t quite finished our coffee when Graham’s LandCruiser came rumbling up the driveway. Do you remember us? It’s good to see you! What’s new? Graham joined us on the veranda. He’d just had two hearing aids installed in town. He kept looking around, a bit distracted, wondering if that was a car or an engine he was hearing whenever the wind rustled the leaves in the trees! Oh, his eyesight wasn’t very good, his hearing was failing, and he thought maybe even his brain was deteriorating! But an hour of visiting convinced me that he was as bright and lively and interested and interesting as I remembered him. He’s in his late seventies and had just come back from a pretty strenuous hike to see the baboons in Uganda — he was about to lose his (purple) toenails from the steep downhill hike in the jungle. He was now preparing for a big ‘cook-off’ to be held in the Franschhoek park on Sunday — a friendly competition to see who can make the best ‘potjiekos‘ (traditional South African stew cooked outdoors in a big black 3-legged pot). Graham joked that this year his secret ingredient would be ‘duck’, instead of a young child, the more ‘traditional’ ingredient that cannibalistic Africans might have enjoyed! 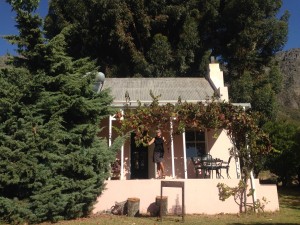 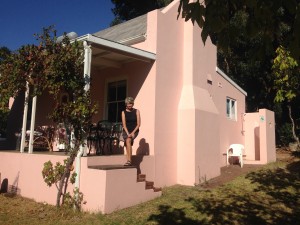 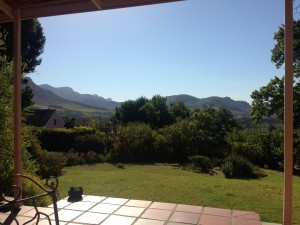 Our view from the front ‘stoep’

Paddy had an appointment in town and it was 5 o’clock, time for us to say goodbye. Sue and I went for a quick look at the inside of Bird Cottage before we left. Not much had changed in there — the old kitchen, the bookshelf, the clawfoot tub, the outdoor shower… And then we headed back to Cape Town. We may see Paddy again — we invited her to join us at our apartment on Saturday afternoon to watch the Street Carnival parade which goes right by our place. And Shirley invited us (again) to come for a stay at her lovely home in Hermanus. We’ll see.

Back at the apartment, Sue went to the Butcher Man to buy some chicken skewers. For supper she barbecued them with potatoes and onions on our balcony while I visited with Mike, the “parking attendant” working the evening shift on our street. He’s one of the many self-appointed parking assistants who work here illegally. They hope to get tips for waving at oncoming cars while you try to park or get out of your parking spot. Mike is from the Congo. He is quiet, friendly, and likes to visit with me while I’m at the barbecue on the balcony and he’s working the sidewalk down below. Today I went down to the street and listened to him tell me what his life is like. Very interesting. (But this entry is getting WAY too long and I need to go to bed. Ask me about Mike sometime and I’ll tell you more.) 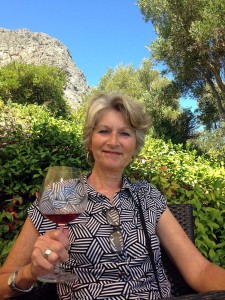 By shortly after 10 o’clock this morning we were in our white convertible Volvo, top down, zipping down the N1 highway. We were on our way to Franschhoek, by way of Paarl. We’ve never been to Paarl before and it’s only a little bit out of the way, so today was our day to check it out. We basically drove into the city, up and down Main Street, and then out again. We passed a couple of great-looking golf courses on our way out. We were about to enter the main drag of Franschhoek when we got a text from Shirley Martens — we had hoped to have lunch with her and our old friends Graham and Paddy (we stayed at their ‘Bird Cottage’ for 3 weeks 15 years ago). Well, that wasn’t going to happen today. But now it’s on for TOMORROW! Okay, no problem. We’ll just go for lunch by ourselves today, and we’ll come back here tomorrow afternoon, after our golf game. It’s just over one hour to drive here, and we’re looking forward to having afternoon coffee at Paddy’s house.

The little town of Franschhoek sure has changed in 15 years! We parked on the main road and wandered up and down the length of the street. Lots of new shops. Lots and LOTS of tourists browsing through lots of souvenir and knick-knack shops. We DID recall some of the older buildings — the mini-mart grocery store, the post office, and the book store. We had made a reservation at the Haute-Cabriere Wine Cellars and Restaurant for one o’clock, and we didn’t want to spoil our appetite, so we couldn’t try any of the delicious-looking pastries to go with our cappuccinos at a little bakery-cafe. Then we waked to the ‘top’ of Main Road, where we used to turn right to go to Bird Cottage, and where there is a historic monument to the Huguenots who settled here in the 17th and 18th centuries. That French heritage is why we saw the red-white-and-blue flags everywhere, and why there is a lot of French spoken here. We remember the monument as a landmark for us from our earlier time here. (In fact, here is a photo of the two of us in front of it in December 2001.) We took a few photos. 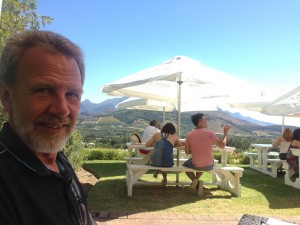 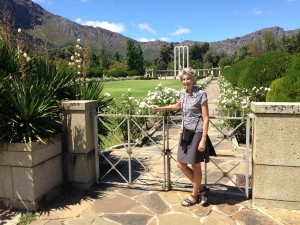 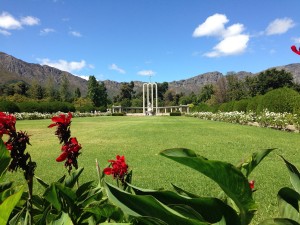 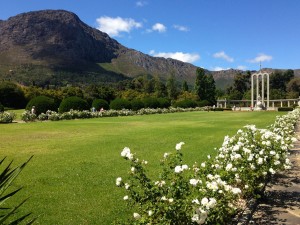 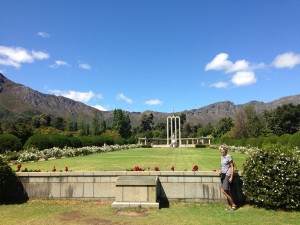 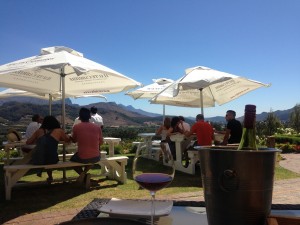 And then it was time for lunch. We drove up to the Haute-Cabriere estate and parked the car. They had a table for us outside, in the shade, with a view of the Franschhoek valley below.

And although Sue decided NOT to try the BIG lunch with fancy-schmancy wine-pairings for each of three courses (or six if you wanted the complete kit). So she had the line fish of the day (Angelfish) and I had the pasta dish of the day. And both plates were as delicious as they were attractive! Sue could hardly eat a mouthful without first declaring how “delightful” this was.

After lunch we drove past our old stomping grounds at Bird Cottage (we’ll check it out more thoroughly tomorrow) before heading back home. The roads are great. The traffic was crawling OUT of Cape Town, but we were heading IN, so rush hour didn’t slow us down at all.

I worked on the computer and Sue read before supper. Then we watched the last few episodes of “Making a Murderer” on Netflix. Sue announced that she  “couldn’t IMAGINE eating supper” so I had to help her visualize it. We ended up having SANDWICHES for supper — thereby switching our lunch and supper around — so we were able to eat all three meals today, in spite of having messed up the routine by having a big (delightful!) dinner for lunch. Yeah, I guess our entire day was “delightful”.