Jesus said to him, ‘The one who has bathed does not need to wash, except for his feet, but is completely clean. And you are clean, but not every one of you. John 13:10 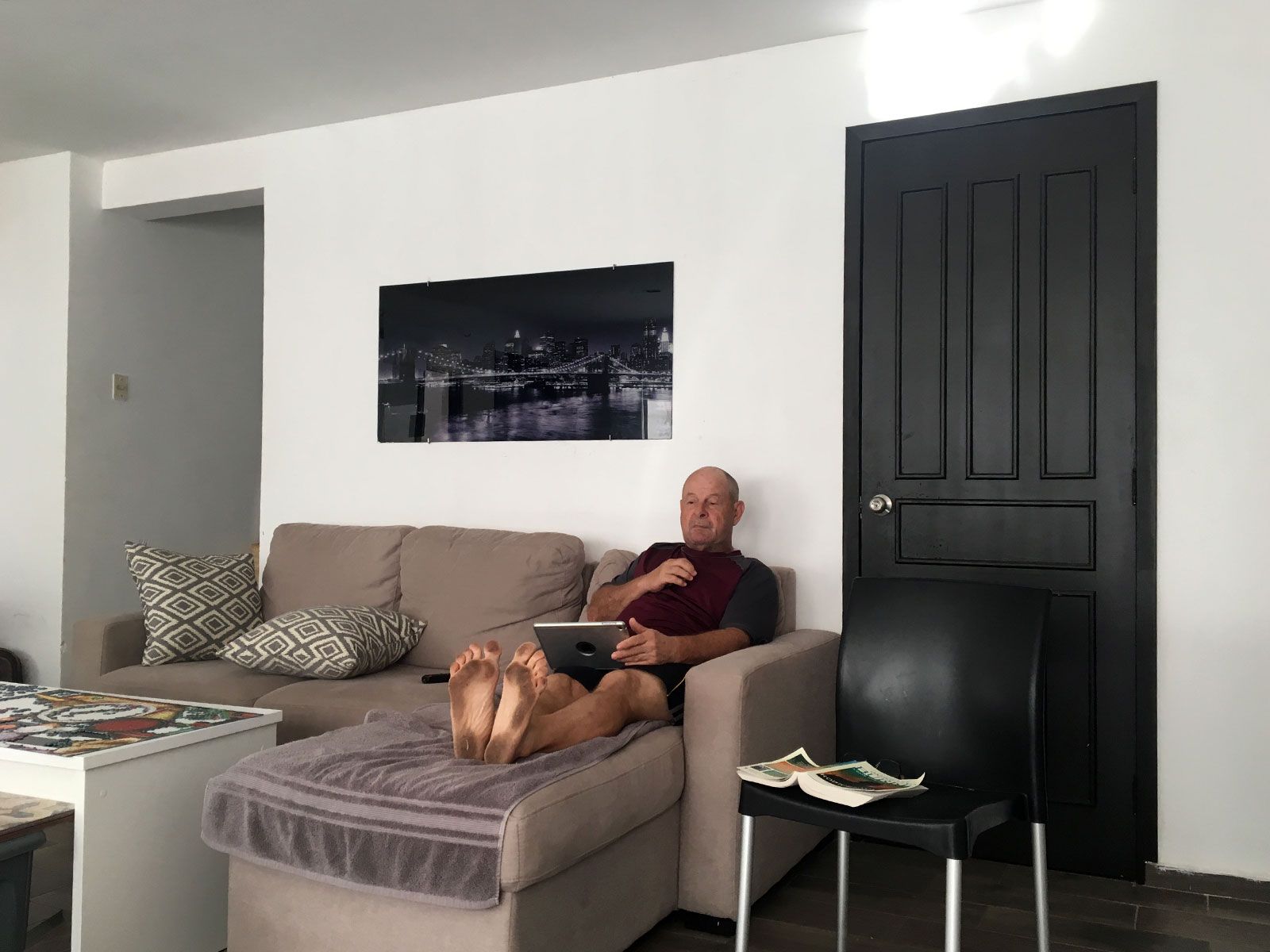 When I went downstairs this morning I knew something was different. As the saying goes, the lights were on but there was nobody home. But no, I mean that literally. The lights were on but where was MaryLou? Unlike every other morning, she was not sitting at the table, deeply engrossed in doing research on her computer. Maybe our internet is down and she’s gone to the clubhouse to access it there? But no, I had just updated my journal and the internet was working fine. It wasn’t until Dave came downstairs to join me for a cup of coffee when I remembered that MaryLou was leaving early today to go on a ‘house and garden’ tour of the homes of the rich and famous in Merida.

So it was a quiet morning at Bugambilia 10A. I did a load of laundry and tried in vain to figure out my coding project. Dave watched the sports and shpott highlights from last night’s TV shows on his iPad. The propane guy returned our filled tank and hooked it up for us. Other than that there wasn’t a lot of action in our place — Dave and I sat on our respective couches while the air conditioner hummed, keeping the air in our place breathable.

Soon after Dave and I had finished our lunch MaryLou got home from her expedition. She made herself lunch and disappeared upstairs. Today was the last day of that family golf tournament that had messed up our daily routine for the last 3 days. I’d been told that we could golf anytime after 1 o’clock. And by now there was a bit of a breeze and some occasional clouds, making the temperature almost bearable. We should go golfing!

All morning Dave had regularly interrupted his online scrabble game by reading a book. He made a lot of headway in that regard. So when I asked him if he wanted to go golfing he said, “Sure, but lemme first finish my book. I’m almost done — I have 10 pages left.” Great. I went upstairs and did a sudoku. When I went back downstairs, thinking that surely Dave was now getting ready for golf — “voot, voot, voot, bleeble bleeble bleeble”. There was his big fat novel lying beside him, still 10 pages to go, while Dave was playing that damn scrabble game on his phone.

A foursome of inconsiderate (probably Canadian) old farts cut in front of us just before we got to the 10th tee. Oh boy. Wait, wait, wait. And when they are finally out of our way on the fairway ahead, BLOOP! Instead of chasing them with a terrific tee shot that rolls up just behind them, we duff one into the reeds in the water hazard 30 yards past the tee. Good thing there’s no one behind us to see that! After following the old guys for a while, we skipped a couple of holes and jumped past them on hole 12 and were back at the clubhouse by 5:00pm.

After golf Dave walked to the mini-superette at the front gate to pick up more supper supplies for MaryLou while I went home to shower. By the time I was out of the shower our dinner guests had arrived. Downstairs, MaryLou had arranged seven dinner plates around our little dining table. She’d converted our kitchen counter to a buffet of fixings for tacos. And as we sat down to dinner there were reports from MaryLou, Ken and Kaaren, and Dave and Deb about their morning ‘house and garden’ tour in Merida.

At seven o’clock it was time to start up the TV and find the Jets game. Or should we watch the Raptors? Well, why not both! We’ll just flip back and forth during the intermission. It seemed that everyone was tired tonight, so at the end of the second period our company said goodnight and headed back home. Too much excitement from the early morning tour? Or the heat of the day? Well, anyway, we were out of wine. And tomorrow’s another day. Ken and Dave W. were talking about coming back for an early morning golf game.

I went upstairs and watched a bit of the “highlights” of Trump’s “State of the Union” speech before going to bed. I guess he hasn’t wrecked it completely, although there doesn’t seem to be a lot of ‘unity’ in the union. Oh well, I’m sure we’ll get the full analysis tomorrow when Dave queues up the late night talk shows on YouTube.