Even though we both went to bed early last night, and even though the windows were open and the ceiling fan was on ‘high’ but we were still bathed in a layer of sweat, and even though a 757 jet took off from the airport and roared over us, just inches from our rooftop (Sue heard it, I apparently slept through it), we both slept well and slept long.

We got up at 8, another day in paradise (although it’s still “hot as hell”). Fruit and yoghurt and toast and some great new coffee! What shall we do today? Well, I still have a sore throat, although I THINK it’s better than it was yesterday. Maybe we should lay low and go for our island circumnavigation bus ride tomorrow when I’ll feel even better. Deal. We checked our email — nothing new in the world. We wandered off to our respective corners of the villa and read: Sue her kindle copy of the Tony Blair autobiography, me with a very predictable John Grisham courtroom story I ‘borrowed’ from the bookshelf in our last B&B in New Zealand.

Lunch happened close to 1pm. Great, as usual. Sue can do magic in the kitchen — and the best thing is, she loves doing it!

After lunch I chased a mama pig and her two little piglets around the yard, trying to get a nice close-up. At some point, Tracy, the Mrs of the host family here, came by and Sue called her over. We ended up visiting with her for most of the afternoon. Learned a lot about the Cook Islands and even more about her family and her situation here. It was a nice way to spend the afternoon. 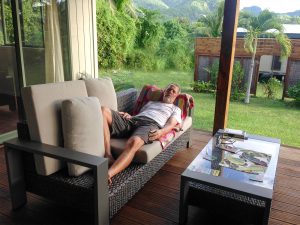 Another exciting afternoon in Rarotonga. 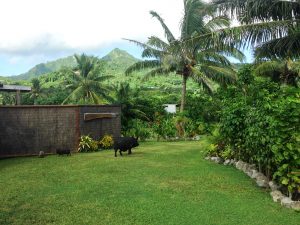 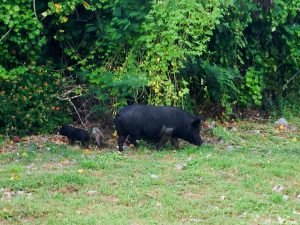 Mama and her two piglet babies.

After the great tuna sliders I had at the restaurant yesterday, Sue was interested in buying fresh fish and see if she could make something similar. Our lady, Tracy, told us there was a fresh fish market not far from our place. So we took a walk in the mid-afternoon heat to go and buy fish. And we came back shortly after with some fresh tuna.

There were some clouds in the sky from time to time this afternoon, and even one or two short little rain showers. That helped to bring down the temperature a bit — and I’d say we probably had the best weather yet late this afternoon. Almost comfortable!

When the Tracy’s husband, Stan, came home from a hot day of putting a roof on a new building he was constructing somewhere on the island, he stopped by and joined in the conversation. But Stan loves to work and needs to keep busy, and it wasn’t long before he was up on a stepladder adding some material to the ‘divider fences’ between the 3 rental villas. After a while Tracy had run out of things to talk about and she left too.

Sue and I did another crossword puzzle (we do them together — she reads the clues aloud and I fill in the answer), and then Sue went inside to fry up those new tuna fillets. Wow! Fresh tuna steaks with a lettuce, avocado, and tomato salad — What a meal! By 8 o’clock supper was cleaned up and we were back on the patio, overhead lights on, geckos flitzing around on the ceiling above us, while we tried to read just one more chapter before calling it a night.

We read until 10 o’clock, then went inside. We showered and watched a bit of Kiwi news on TV while snacking on some Black Forest Tim-Tams. And then it was bedtime again.