Just after midnight the power went off at our hotel, the House on Olof Palme, in Windhoek. In fact, the power went off in the entire surrounding neighbourhood. We woke up a couple of times during the night and the power was off all night. That meant no air-conditioning. That meant that when our 5:00am alarms went off, we were completely in the dark. Luckily Sue had packed our suitcase the evening before.

The woman of the hotel was up — and boiling water on her gas stove in order for us to have a cup of coffee before we left. I felt a bit sorry for her — this was beyond her control, happened relatively infrequently (according to her), and made her a little worried for her own security. Her husband was out of town on one of his regular ‘game-hunting’ trips; the rows of electric fencing around the top of the 7-foot wall surrounding her place was now dead — and although she had TOLD us there was not a lot of crime in Windhoek, you could sense that she was worried also for her safety. 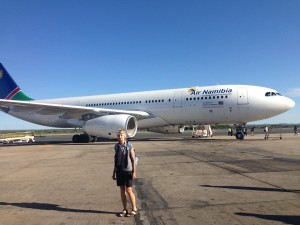 We backed the truck out of its parking stall in the dark and headed toward the airport. By the time we got to the filling station next to the airport and topped up the diesel in our tank, the morning sun was already warming up the day. We checked in. Customs again. We had plenty of time to sit in the big airport and have a coffee. While I was in the washroom the power went out. Total darkness. Lots of comments about this being the ‘worst airport in the world’. Finally the backup generator kicked in.

The flight back was good — hot breakfast, some black dude causing a big disturbance a few rows back, a bit of turbulence just before we landed in Cape Town. We disembark. Queue up for the passport control again. Pick up our luggage and walk out. I used my phone app to get an Uber taxi. “Head for Meeting Point #3.” I could see the little car icon on my phone driving around the loops, right near where the arrow showed we were. No car. Could not connect. Cancel taxi. Try again. Same, same. Other passengers around us walking around staring at the Uber app on their phones, then up at the signage, then around at the cars, then back to their phones. This is not working. Cancel again. This is pissing me off. I’m sure I’m getting charged for each of these cancellations. We walked back to main lobby and the first guy we see we order a taxi. He contacts James, a cab driver, and soon our stuff is in the trunk of the car and we are heading back into Cape Town to our apartment. The meter ticks along as James wants to make friendly. Don’t we want to hire him to drive us all the way to Hermanus (an hour and a half ride)? Much cheaper and better than having our own car. Bla, bla, bla… and the meter is ticking along at nearly DOUBLE what it should be! When we get to our apartment we scold him properly, and pay him 50% more than what it should have been.

Now we get a couple of sandwiches from Giovanni’s and have lunch in our apartment. Re-pack a bit and load up the small trunk of our Volvo. Robert and Arlene squeeze into the back seat of our 2-door, holding packs on their laps, and we’re off. 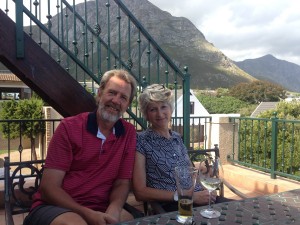 The drive to Hermanus is amazing! WAY nicer than Sue or I recall. After we’ve passed all the shanty-towns that line the road from the suburbs of Cape Town to the airport, we pass through green fields, orchards and vineyards, over a mountain pass, past a golf course, through some beach towns, and finally end up in Hermanus. Our B&B is just a few blocks DOWN (closer to the beach) from Paul and Shirley’s house. We park the car, empty the trunk, register, get our rooms. Reconvene upstairs at the bar on a large balcony that gives us a clear view of the miles of white sand beaches just below us, and the green fynbos growing on the mountainside behind our place. Spectacular! Beer and wine is available on the ‘honour’ system here — take what you want, mark it down, pay for it later.

Back in our room Sue has a little nap. I finagle with my devices, trying to get everything plugged in with my various adapters and then fighting with a weak wifi signal. We Skype with our kids — doing our best to catch bits of what they are saying and looking at pixelated jerky images of them on our screen. Oh well, maybe tomorrow when we switch to an upstairs room we’ll have a stronger signal. 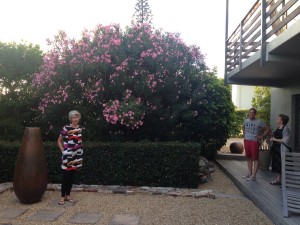 At quarter to seven we are all dressed up and heading up the street to Paul and Shirley’s for dinner. They greet us outside when they see us coming. For Robert and Arlene this is a visit to a former ‘home’ — they’ve stayed at this house for a couple of weeks twice before, about 8 years ago. We get a quick tour of the house and the yard — it is LOVELY. Paul has a wood fire going on his large braai outside, Shirley is making a salad in the big kitchen. We drink wines Paul has selected from his large wine cellar. After a short while we are joined by Meghan and Casper, friends of the Martens’s whom Robert and Arlene met and got to know on their previous visits here.

After an hour of barbecued ‘wurst‘ and drinks we go inside and are seated at the large wooden dining table. Potatoes, salad, chicken, steak — all done just right and so delicious. And we talk. Later we have dishes of assorted ice creams, followed by plates of cheese and crackers. It is a lovely evening and a lovely visit.

It’s after eleven when we say goodbye. We’ve sort of arranged to meet again, maybe do a wine tour with Paul and Shirley. The four of us walk down the street in the quiet darkness, back to our Lavender Manor Lodge. Tired. Windhoek to Cape Town to Hermanus. It’s been a LONG (we’ve been up since five!) but very enjoyable day.