We woke up early. I made a couple of coffees to go and we were off the driveway at 7:04. We’d had a Facetime call with Ed and Val yesterday and Ed had warned me about rush hour traffic going through Phoenix so we were happy that we could zip by the stalled freeways by taking the HOV (high occupancy vehicle) lane. Once we were past all the congested traffic we pulled into a roadside McDonald’s and got some McMuffins and cinnamon rolls.

We got off the main route north and took a little ‘detour’ drive through Sedona. The drive was lovely and the red cliffs were spectacular. Unfortunately we were not the only tourists who thought today would be a good day to do this! All the roadside parking lots were more than full. So the great sights are mostly in our memories; the only photos I have to show for it were these two which Tim took from inside the van. 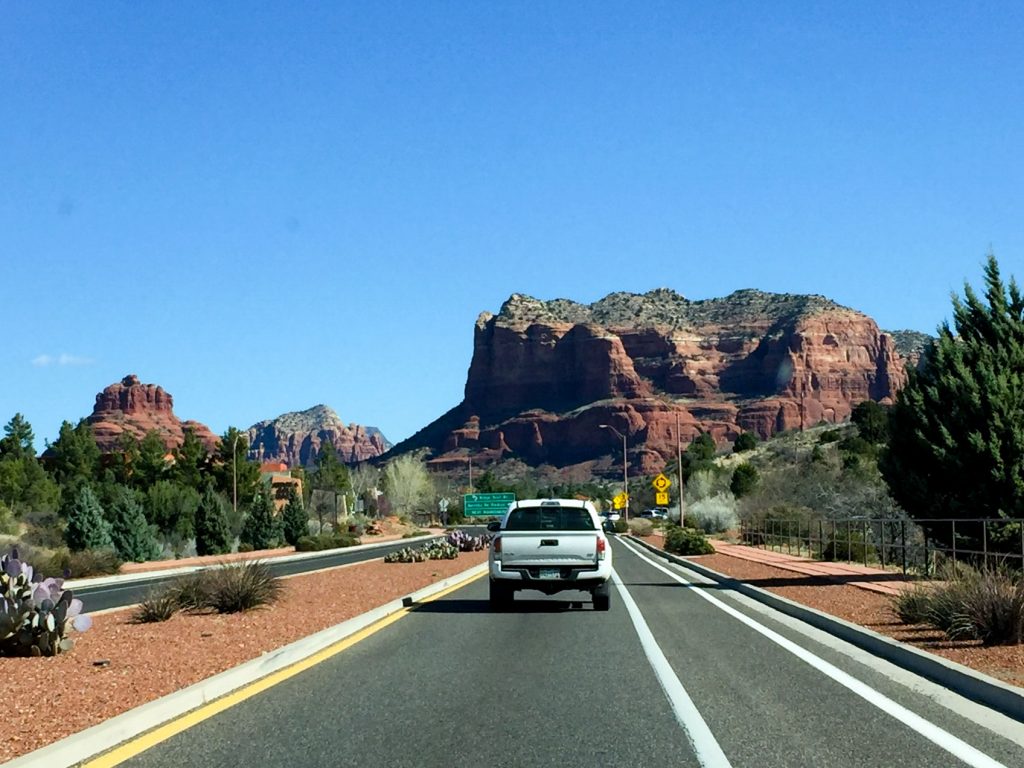 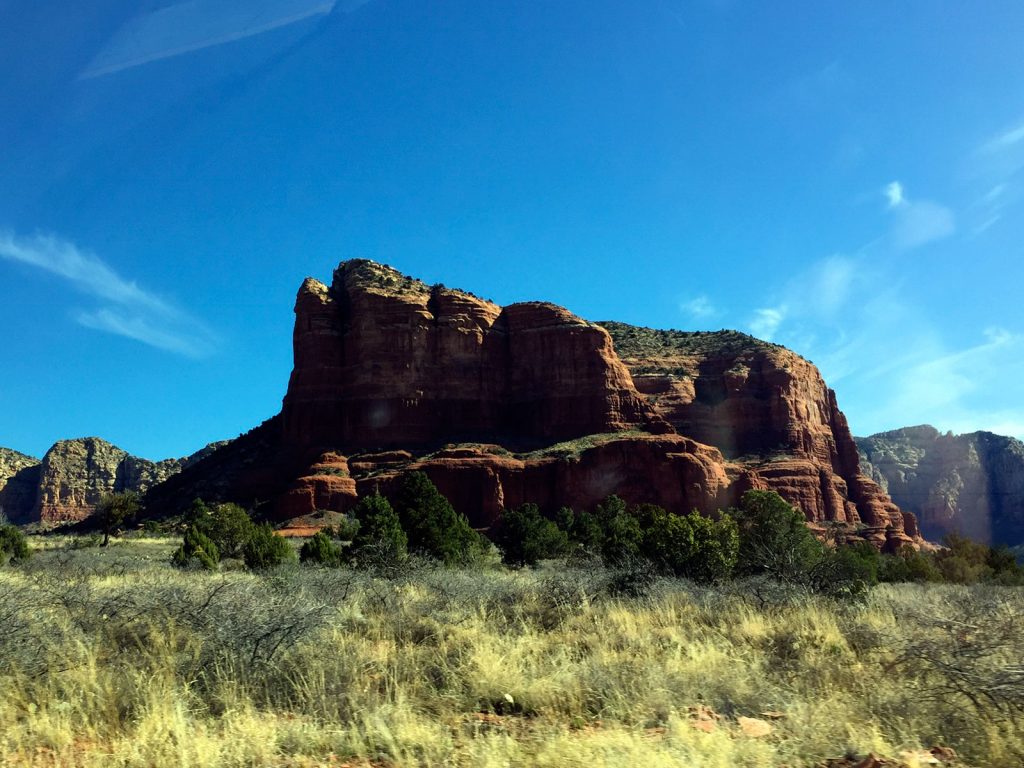 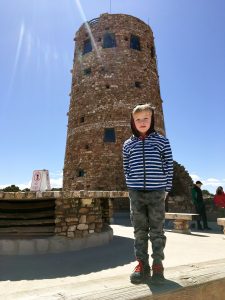 The detour probably added an extra hour to our 4-hour ride up to the Grand Canyon, but it was worth it. We stopped again in Flagstaff to fill up the van and pick up some sandwiches to eat once we got to the Grand Canyon. Then we took the eastern route up through Cameron. From there we headed up to the east entrance to the South Rim of the Grand Canyon. Again, we found that this was not an ‘original’ idea. The line-up of vehicles waiting to pay the $30 park entrance fee was half a mile long! We had hoped to eat our sandwiches in the National Park but it was 12:30 and the line was moving pretty slow so we had lunch in the van.

Once through the gate we stopped at the first stop, the Watchtower, from where we got our first view of the impressive canyon. We took a few photos and then climbed the 85 steps up to the top of the tower to get a 360 degree view. Tim and Max had not been to the Grand Canyon before, and although Alex and I had seen it on previous visits, the sheer vastness of this wonder of the world still amazes. 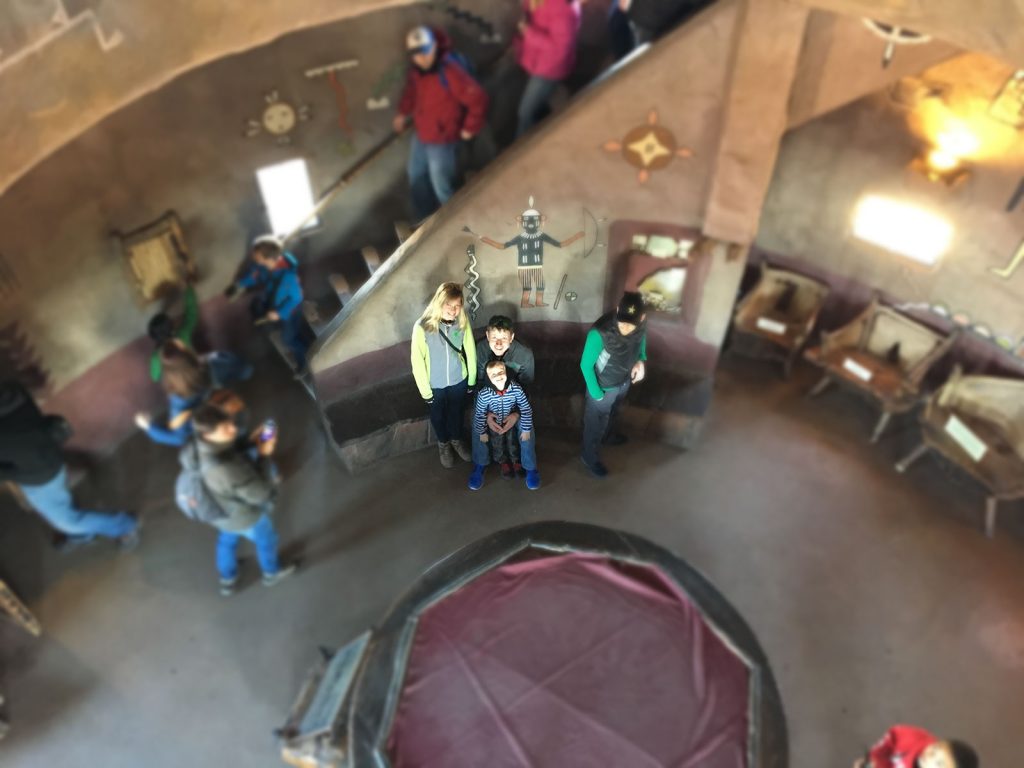 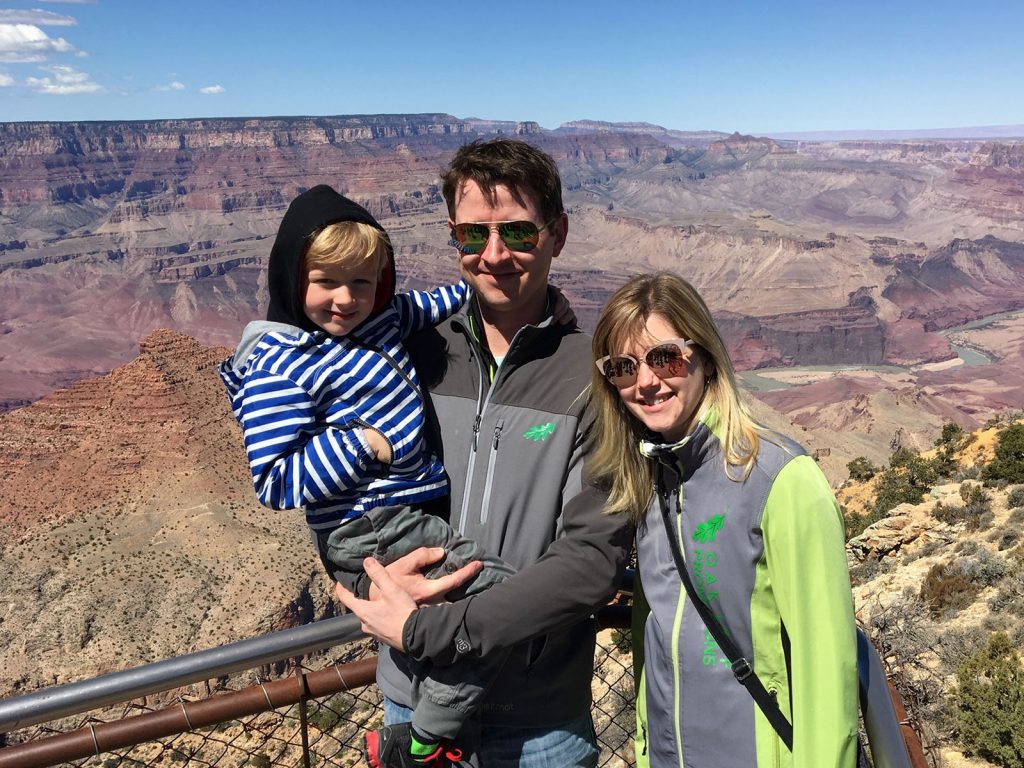 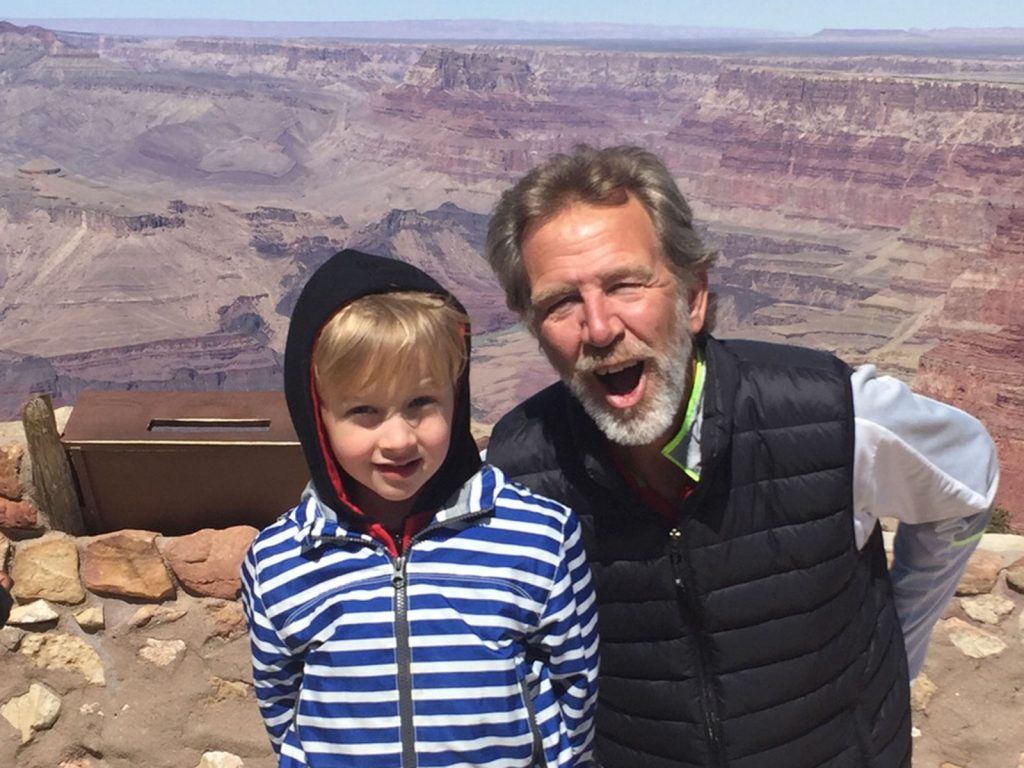 We continued on our drive westward, stopping at some of the lookout points along the way. Tim was very much hoping to take a helicopter tour of the canyon, so we took a turn south once we got to the midway point in order to get to the small canyon airport where several helicopter tour companies are based. Unfortunately that meant we had to leave the park, and although our park pass permitted re-entry, the miles (I mean MILES!) of cars and motorhomes we saw ‘parked’ on the highway into the park entrance as we drove out ruled out a return visit for us. 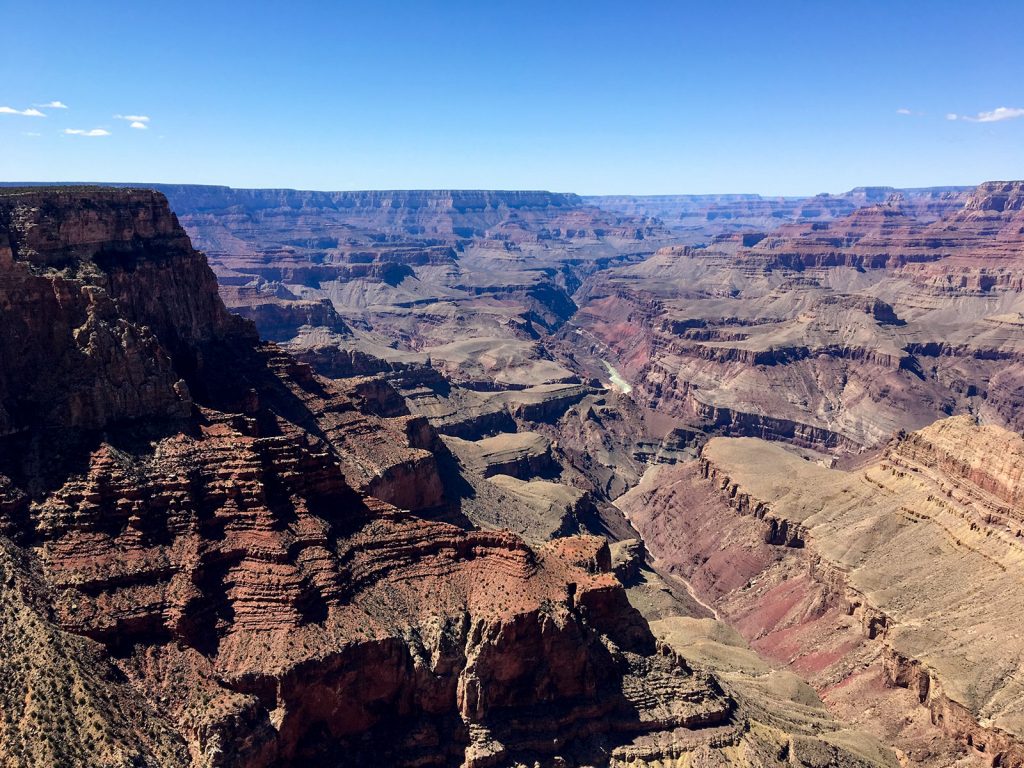 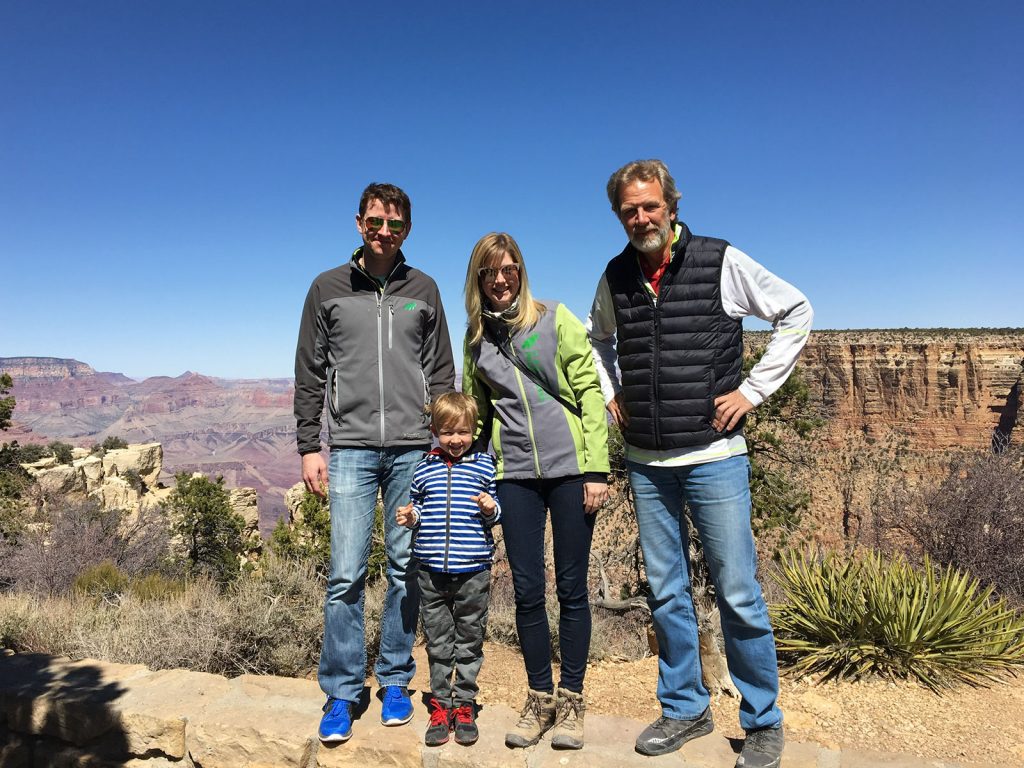 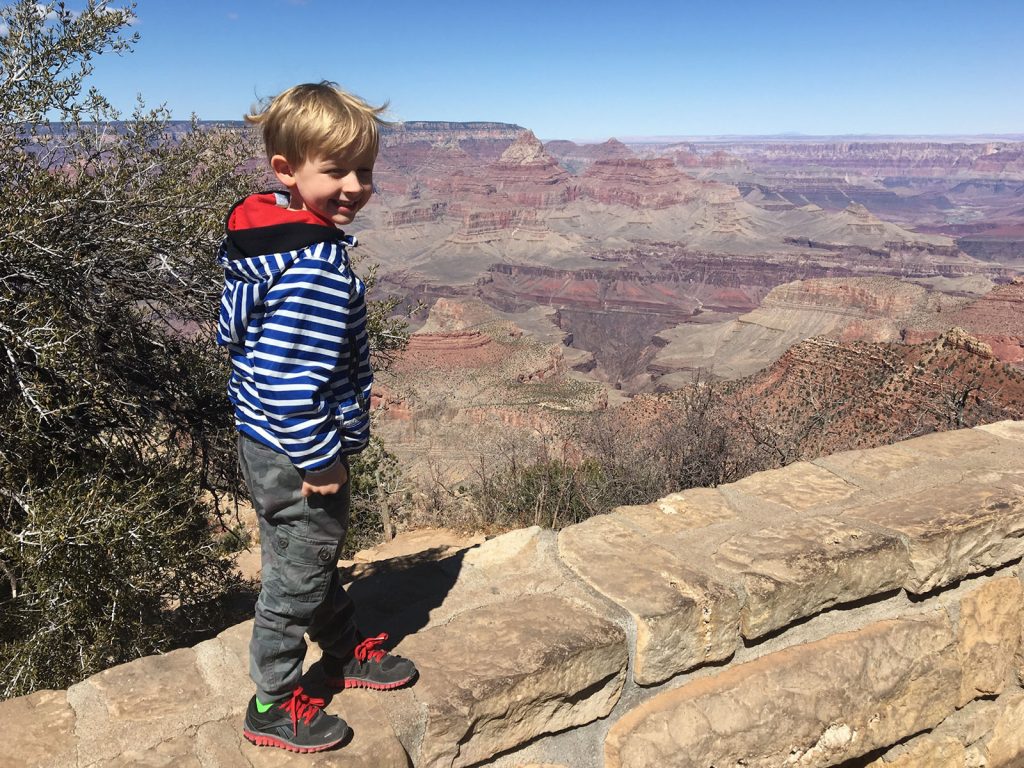 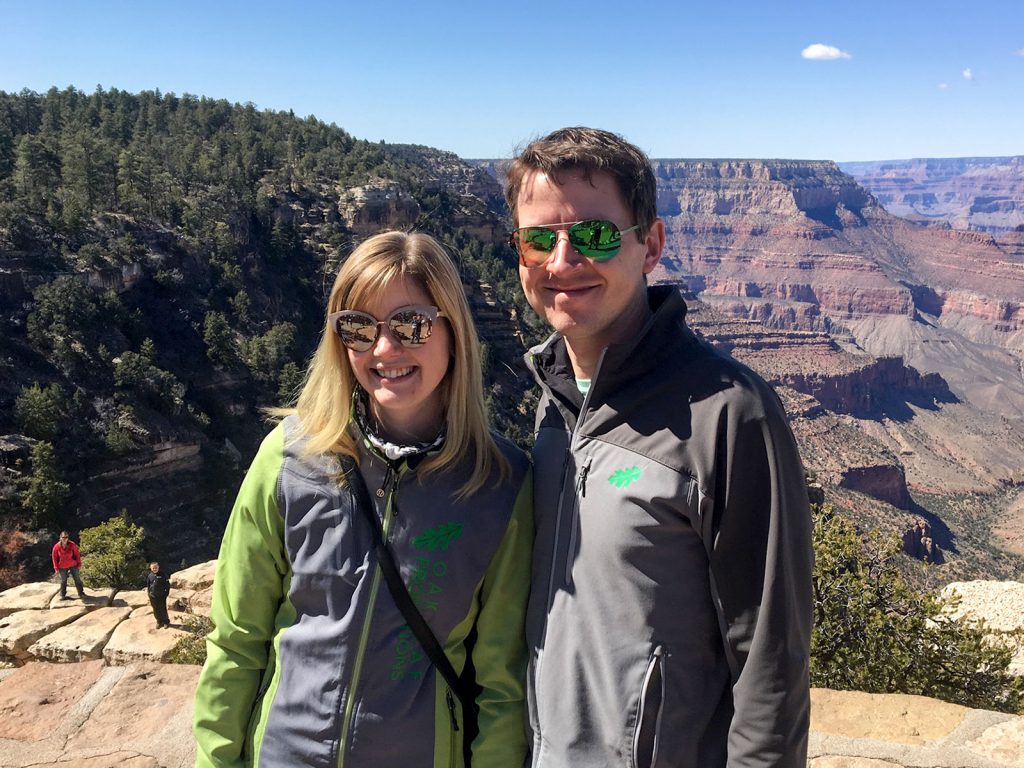 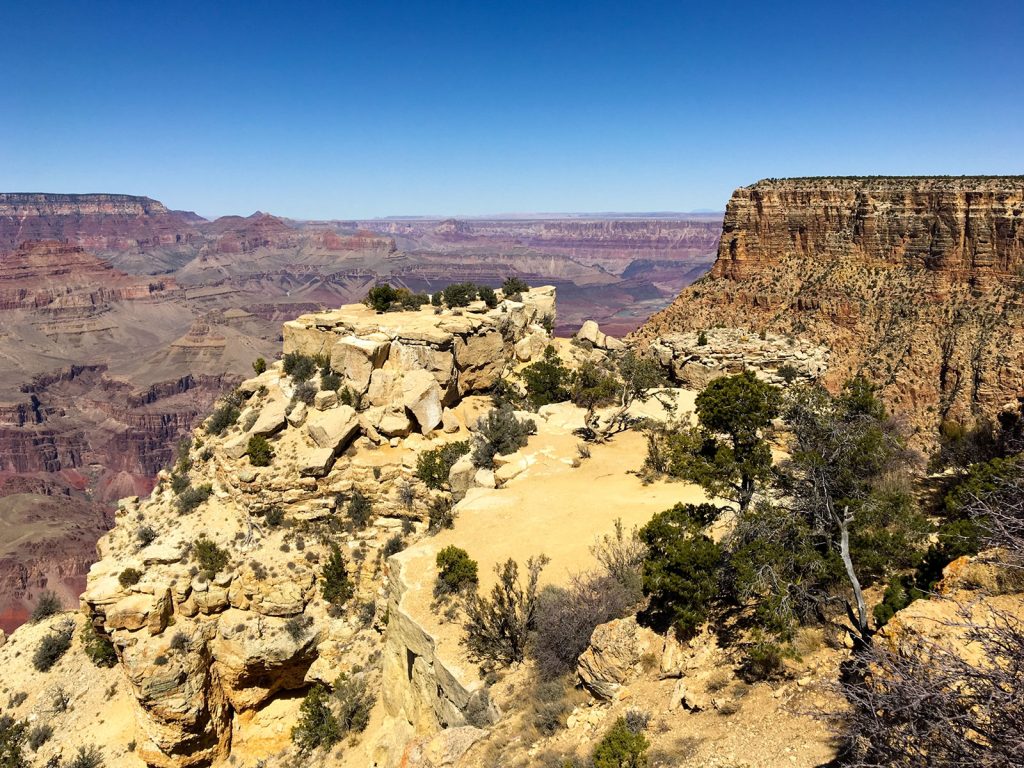 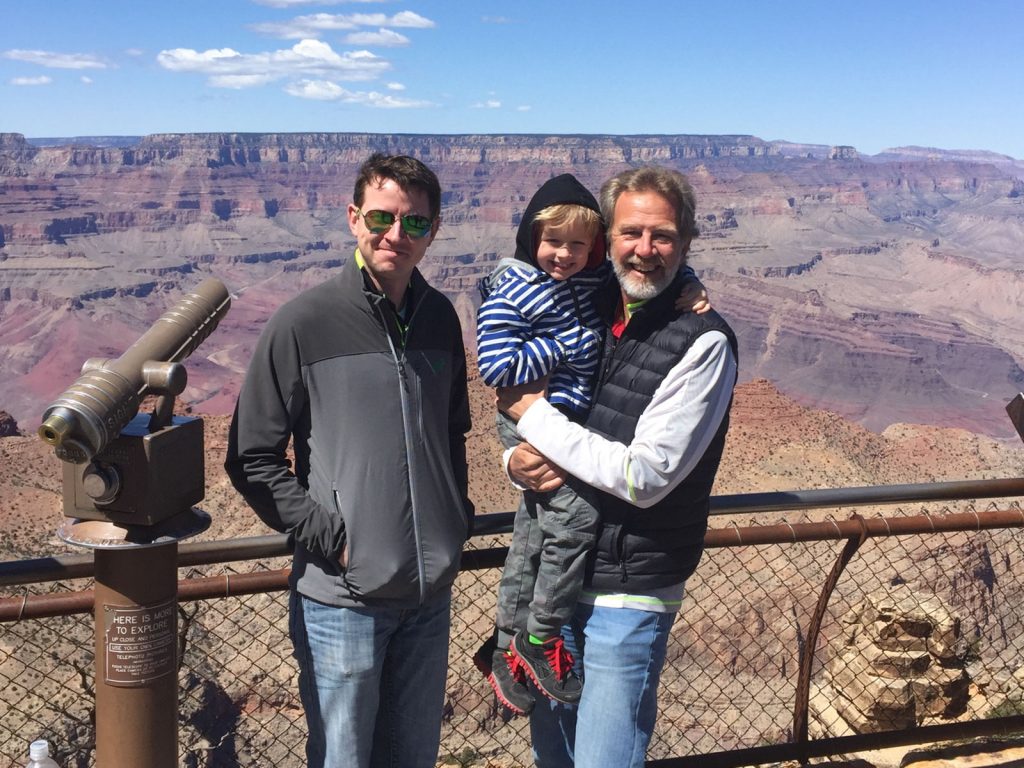 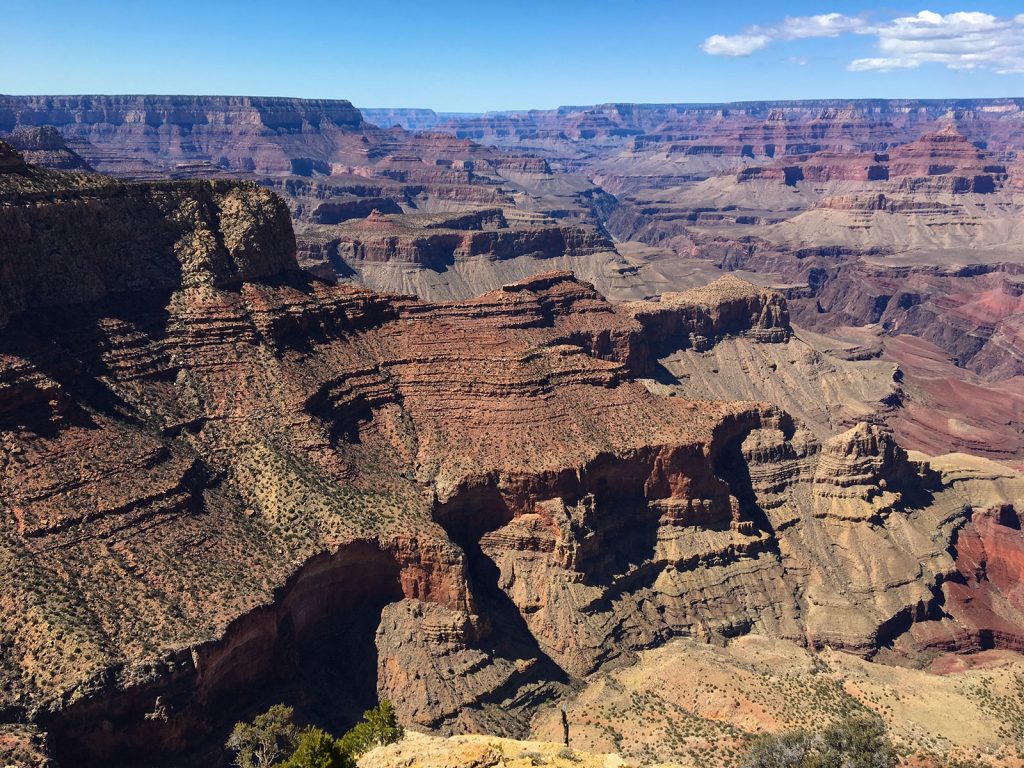 We pulled into the airport and Tim was happy to learn that he had arrived just in time for a three o’clock flight. He watched a short safety video and soon joined a family of four for a 45-minute flight. Alex, Max, and I watched (and recorded a video) of the take-off. Then, while Tim was having his tour, we drove back into the town of Tusayan, just south of the park’s south entrance, and went to the National Geographic IMAX theatre to check on showtimes for the Grand Canyon movie. We were just a few minutes too late for the 3:30 show. We went back to wait for Tim. When he landed we hurried him into the van and were back at the theatre just in time for the next showing. 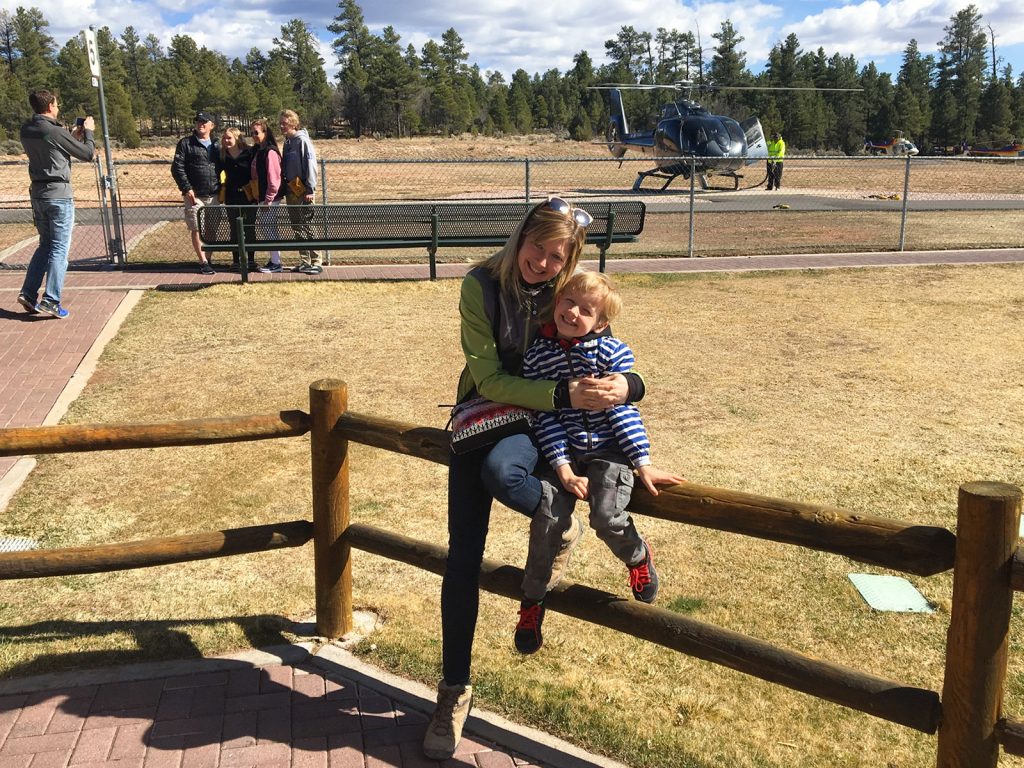 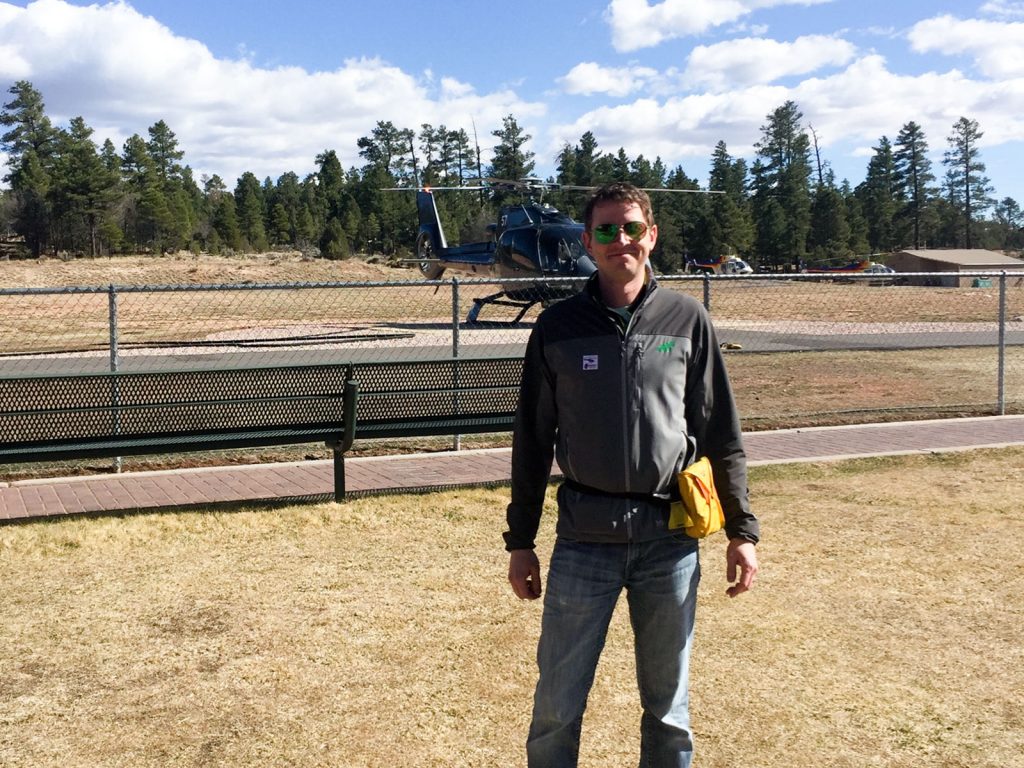 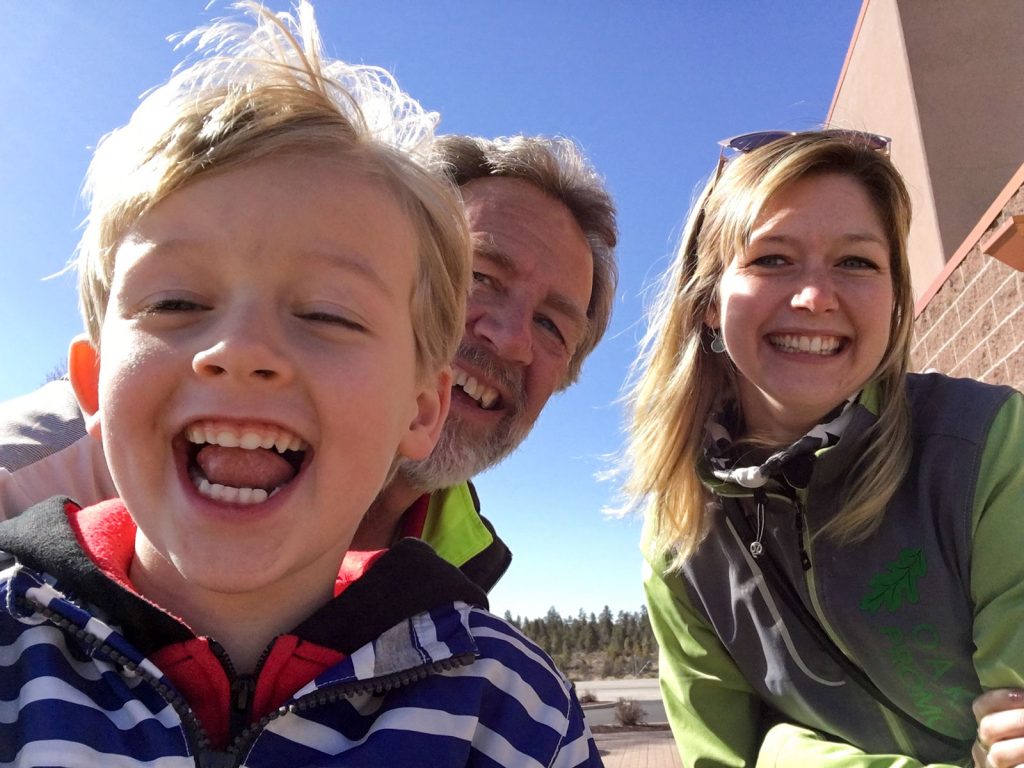 After the movie it was time for the long drive back home. It had already been a LONG day in the van, and we still had 4 hours of driving left. Max was holding up surprisingly well, listening to his iPod and telling jokes.

We stopped for dinner at a restaurant in Flagstaff. The temperature now that the sun was down was 1 degree. Brrrr. On our drive back to Phoenix I watched as it climbed back up to 20. About half an hour before we got home Max fell asleep with his headphones on. Tim carried him into the house and put him to bed. It had been a long but fun day. Max was curled up with a big smile on his face. It was just after ten o’clock.

We poured ourselves a little glass of port and sat down to watch Colbert. Didn’t see much of it — the kids had gone to bed when I woke up at around 11:30. I turned out the lights and headed upstairs to bed.