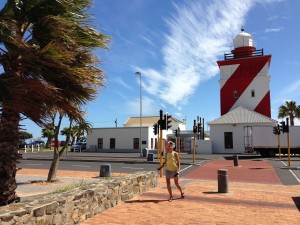 It was windy when we woke up. The forecast for today was about 26 degrees and very windy. The forecast was right. We went for a walk late in the morning — the usual walk along the promenade — but there were times when the wind literally stopped us in our tracks!

Sue stopped at the Spar (grocery store) on the way back and picked up lunch fixings. After lunch I worked on Sue’s bookclub website — it stopped working about a month ago because it was running on an old version of PHP. It took me a couple of hours to update the code. Sue read her Canada Reads book, The Illegal. The kids Facetimed for a bit. We decided to watch another of my downloaded TV series and watched 3 episodes before supper and another in the evening.

We went to the ‘Simply Asia’ place a couple of blocks from our place and both ordered Thai dishes “extra spicy”. That was fun. When we got home we tried watching the last Canada Reads episode (streaming on CBC.ca) but our internet was flaky again and the show ‘stuttered’ so bad we finally gave up on that and just read the results online. Sue played bridge on her iPad while I fiddled with a website project for a bit before going to bed at around midnight.