Good Friday today. We’re not sure what’s open and what’s not — we know it’s a holiday. In fact, for the working people it’s been a very short week: Monday was Human Rights Day, today’s Good Friday, and Monday is Family Day, another national holiday.

It may be a holiday for most South Africans, but there was no ‘special’ breakfast at our place! Fruit and toast and coffee. We had a lazy morning, and then had an early lunch so we could get to Milnerton, an 11km drive up the coast from here, in time for our 12:45 tee time. Although the morning started off sunny and warm and calm, by noon it was clouding over. We’d heard that this “links-style” golf course right along the coast was not fun to golf when it was windy, so we’d booked our game for today with that in mind. Sue’s iPad said no rain today (it’s coming tomorrow, though) so we were a little concerned when we saw the clouds.

We parked our car and registered at the pro shop. We were half an hour early, so we decided to go putt a bit. Well, it wasn’t long and Sue was back in the pro shop trying to warm up her frozen fingers. The wind was howling! And the air was cool and getting colder. I wasn’t sure if it was a ocean mist or if it was actually starting to rain! And we’d left our (new) rain jackets back at the apartment.

We were scheduled to tee off as a ‘two-ball’, but were joined at the last minute by another ‘couple’. Gunnar, a 55-ish magazine publisher, and Rosita, a 65-ish English teacher, both from the island of Gotland in Sweden, were here for a 2-week holiday together with a group of about 18 fellow Swedes. They do this every year. We very much enjoyed meeting them and spending the next 5 hours on the golf course with them.

Not long after our first tee shot the wind and a thin rain started. This was NOT going to be fun. My tee shots, which have been getting progressively more erratic and unpredictable, continued to let me down. I lost a few balls right off the bat — over the sand dunes, into the scrub bushes that lined the fairways, into the water on either side of the fairways. If the Swedes hadn’t raced ahead in their golf cart and found my ball for me, I’d have been out of ammo by the fifth hole, heading back to our nice warm and dry apartment! But we persevered. And it was worth it.

Halfway through the front nine the clouds moved out to sea and the sun came out. (The course layout is a long narrow walk out to the ninth where there is a small cafe, and then comes back the same way to the clubhouse for the back nine.) Sue was playing very well, every tee shot straight down the middle. And Gunnar and Rosita were playing a friendly competition and were having a great time. By the time we were sitting down in the halfway cafe and watching Gunnar wash down a massive chicken burger and fries with two Black Label beers, we were SO glad we hadn’t aborted after 2 holes. 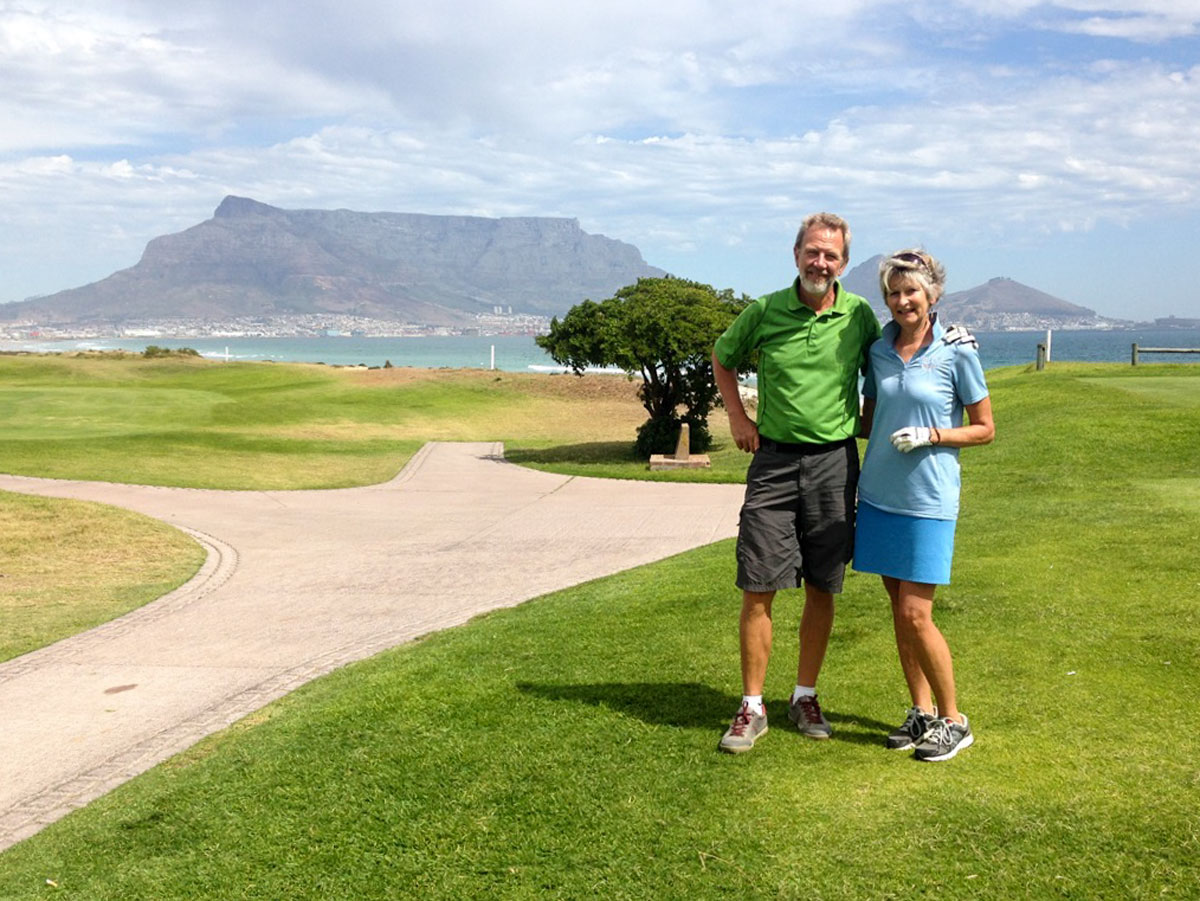 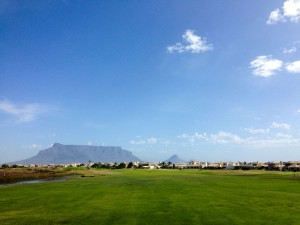 But we were not home yet! The back nine started off a bit cooler — maybe it was the rest stop or maybe it was the wind picking up or maybe it was the beers — but while the others had their scores go up a bit, MY game got back on track. While Gunnar lost 3 new ProV1s on one hole, I managed to play with the same ball until the final hole! By the time we were on the 15th hole the weather was changing again — now the fog was rolling in. It got progressively thicker with each hole — first we had trouble seeing the coastal highway which ran alongside the course, then the beautiful new homes that lined the some of the fairways disappeared, and then we couldn’t see the flag on the green until we were less than a fifty yards out. By the last two holes the Swedes would drive their cart out onto the fairway, to the green and back, before we teed off, just so we’d know what direction to hit the ball (and where the hazards were). It was crazy! and it was fun. By now the Swede’s competition was getting serious — Gunnar was playing for beers, Rosie for champagne, and they were tied going into the last green. Rosita was the last one to putt; we all circled around the hole (by now the fog was so thick we could barely see across the green) and watched as she THREE-putted from 10-feet out, and lost to Gunnar. He was relieved and happy. They hugged. Sue thinks they had more than just a friendly side bet going. We said goodbye.

As soon as we were back on the road the fog was a non-issue. The road was just inland enough, I guess. We stopped at our local Metropolitan golf course and I dropped off my pull cart (I bought it used from Basil, one of the caddies there, and now he could sell it to someone else). We parked the car and hauled our clubs up to the apartment — that’ll be it for our golfing here. We FaceTimed with the kids — they have a string of family gatherings spoiling their long weekend but seemed happy to be back in their house; Alex looking forward to a week off ahead, Tim busy building Lego cars with Max, and Max proudly showing off the ‘Paw Patrol’ tattoo he got from ‘Auntie Melissa’.

I went to Big Route to pick up a pizza (it’s Friday, afterall). On my return I met Mike — he was having another ‘slow night’ parking cars (not much action out here on this Good Friday night) and was worried about a cold (and wet) night ahead. I gave him the change from the pizza, to which he said, “I have never experienced a father’s love, but YOU are so good to me, you always take care of me.” I’m hoping to go out for coffee with him before we leave here — and hear some of his story.

After supper we watched some TV. By now that is the cue for me to get comfortable on the couch, close my eyes just for a minute, and unwind from a long hard day. It seems to me that at some point during the evening I had a bowl of ice cream for a night snack. It’s a good thing that Peter Mansbridge always starts off The National by listing the top 3 or 4 news stories so I at least FEEL like I know what’s going on in the world. I feel sorry for all those people who lie in bed and can’t fall asleep — GET A TV IN THE BEDROOM!