[Three] are better than one; because they have a good reward for their labour. For if they fall, the one will lift up his fellow: but woe to him that is alone when he falleth; for he hath not another to help him up. Ecclesiastes 4:9-10

Well I woke up Sunday morning with no way to hold my head it didn’t hurt.
And the coffee I had for breakfast wasn’t bad, so I had one more for dessert.
Then I fumbled in my closet through my clothes and found my cleanest dirty shirt,
Then I washed my face and combed my hair and stumbled down the stairs to meet the day.

I’m telling you, this journal almost writes itself! Especially if you let Ecclesiastes (was that really a person? or was it a tribe of Israel?) and Kris Kristofferson write it for you.

But I DID wake up with a bad headache again. And I did make coffee and hold my hurting head and watch my Sunday morning shows on TV. And after a couple of hours the headache subsided a bit and then the first NFL playoff game of the day started and I was back in the groove. I’ll tell you who WASN’T in the groove: Philip Rivers and the Chargers. Yowsers! Losers!

Well I’d eaten almost everything edible in the fridge and what with the Driedgers expected to arrive late afternoon by bus from Cancun I thought I should really stop at a grocery store on the way to the bus station and get some provisions for a couple of meals. I was nearly out the door when the phone DINGS!! We’ve arrived! We’re at the bus station. Shoot! How did they make it to Merida so fast?

So I ran to catch my Uber and we drove down to the bus station. And there they were, hack en pack, patiently waiting for me to show up. MAN it was good to see them! My friends are here! Let the party begin! But first we gotta get those HUGE bags into the little Uber car. No chance that would work with the car I came down with. I sent him away and called another Uber, specified “Necesito un auto grande para mucho equipaje”. But when José arrived his car was no bigger than the first one. Well, we didn’t have all day! And José was determined to get this fare. In the end we jammed the big suitcase and the golf bag into the trunk and José took the laces out of his brand new boat shoes and tied them together and then tied the trunk lid down on the bags that were sticking out the back. Vamos! 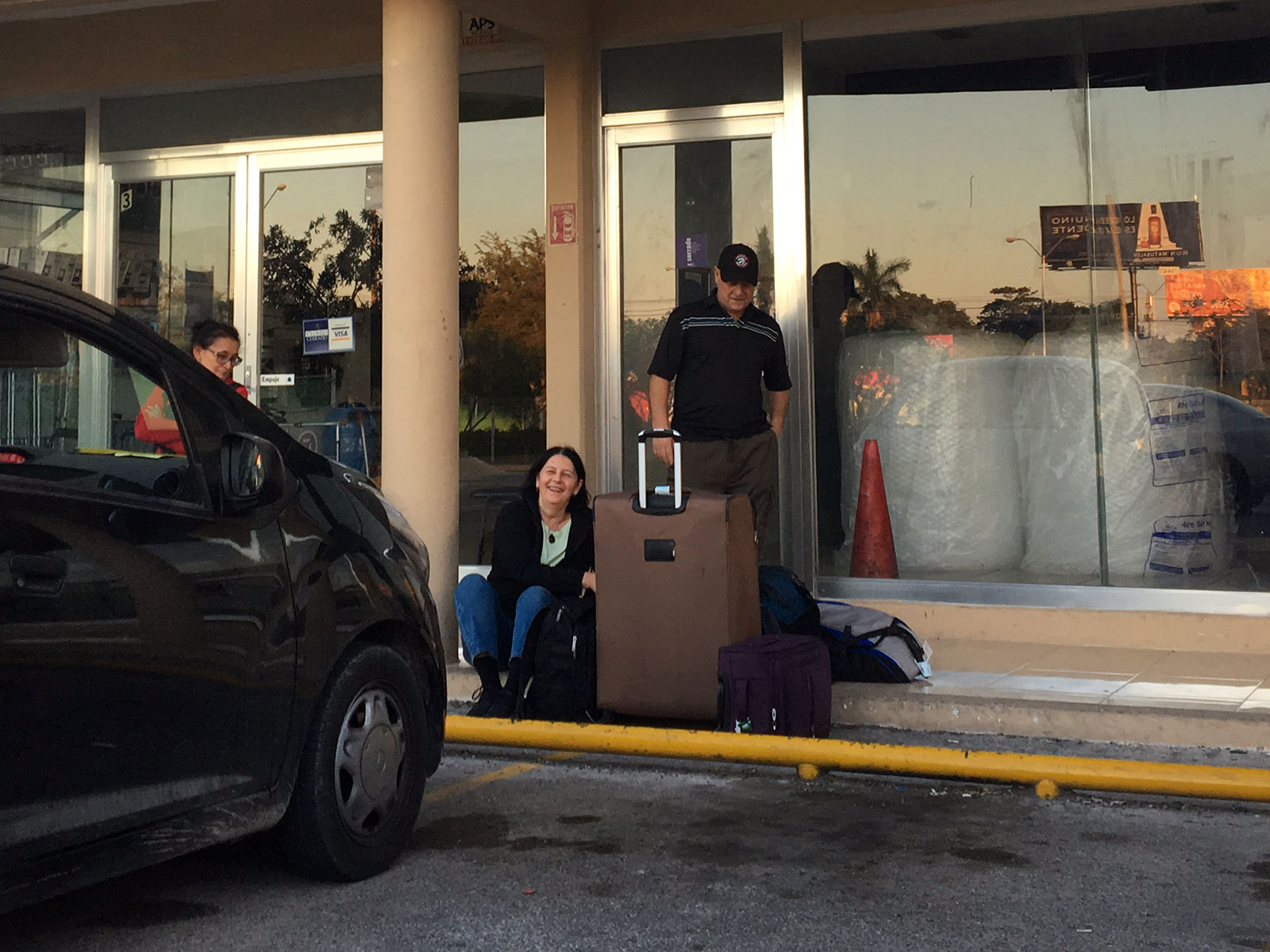 No passports had to be shown and no one was frisked by the over-zealous security at our gate. We unloaded the Uber at the house. Dave and MaryLou were both all positive about the place. Well THAT’S what I need — someone to pick me up when I falleth. Stop being such a negative-ninny and adjust your attitude!

Okay, nothing in the fridge. How about we go to the clubhouse for supper. Good idea, except that after a bit of unpacking, by the time we got to the clubhouse it was 6:15. The good news was that they were open until 7. The bad news was the kitchen closed at 6:00. “No problem,” say the Driedgers. “We’ll come back tomorrow. We’ll go somewhere else tonight.”

And so it came to be that we flagged down another Uber and got a ride into town. We got a table at the Texas Roadhouse, the first restaurant that I could identify as a restaurant on the road in. We ordered and had a fine time talking and eating for the rest of the evening.

When we got back to the house it was time for the Driedgers to rest their weary bodies — they’d gotten up at 2:00am to go to the airport. I think that’s about when I went to bed last night! They had had a very L-O-N-G day. As they went off to bed I sat down and wrote my journal.

I took my last antibiotic pills tonight. I still have another box to go, but now I suspect that it is the pills that are causing my headaches. We’ll see. Surely a great game of golf will make all things right. I’m looking forward to it.