Be not among drunkards or among gluttonous eaters of meat, for the drunkard and the glutton will come to poverty, and slumber will clothe them with rags. Proverbs 23:20-21

We had an early start this morning. Ken was at our door before eight o’clock, ready to hit the links. I had to gulp down my coffee and had no time at all to do a suduko in the bathroom. Off we were. MaryLou wasn’t going to hang around the house by herself either — she was taking an Uber into Merida to spend the day with her sister.

There was a lineup at the first tee. The four old guys ahead of us didn’t exactly have an auspicious start to their game. It looked like we might be in for a LONG day. But after a few holes it became apparent that while the foursome ahead wasn’t very good, we had our own challenges. Sure, we waited at every tee, but it seemed the more exasperated and annoyed we were, the worse our own tee shots were. So we just shut up and golfed.

The early start was meant to minimize our time in the hot midday sun. It worked for a few hours. But by the time we made the turn at hole 9 the heat was on. I finished my bottle of water early and was already looking forward to the beer cart by eleven o’clock. I’ve noticed that my shorts are hanging looser every day — with all this daily hard work and massive amounts of perspiration it seems to me that I MUST be losing weight. That’s encouraging. Too encouraging. It gives me license to order a second beer with my big cheeseburger and fries at the after-golf lunch at the clubhouse patio. Something’s wrong here. My head tells me my pants are loose because my shorts and belt are expanding in the high humidity. But my gut says — oh, never mind what my gut says. I’ll see how the pants fit after I’ve laundered them. 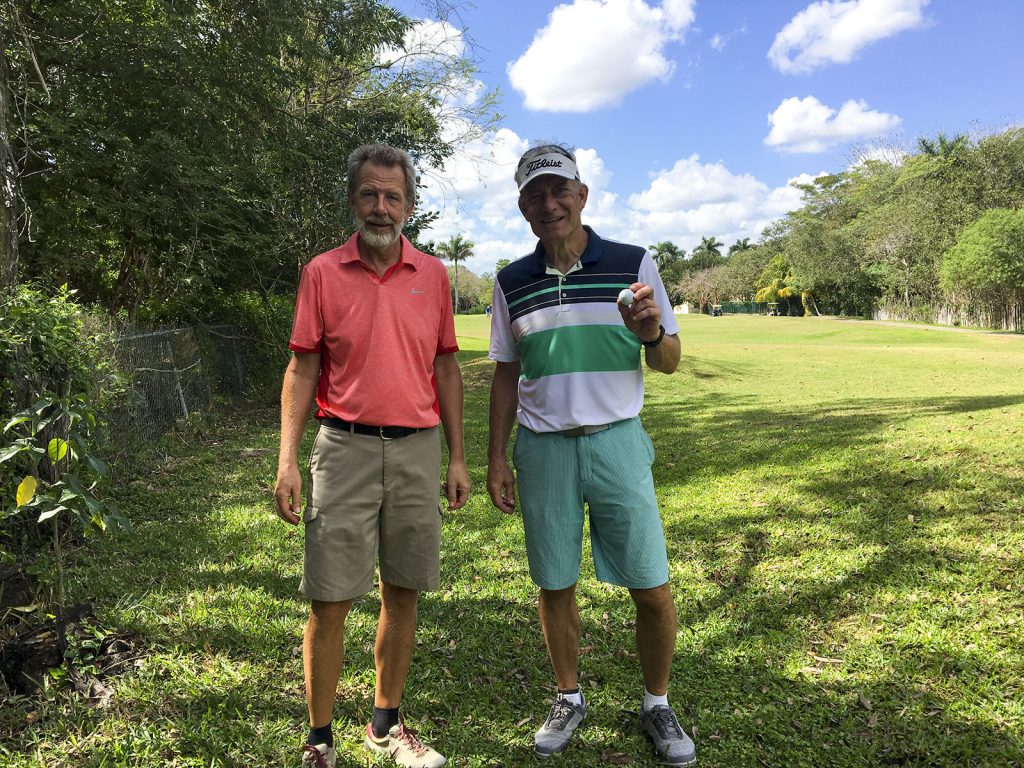 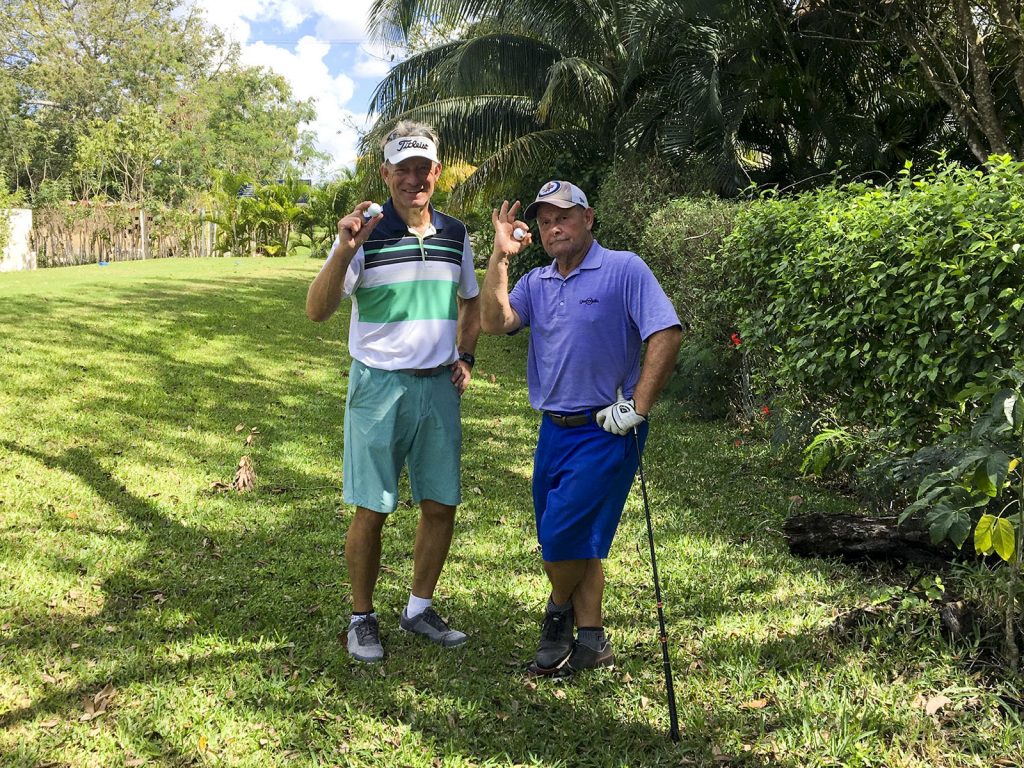 I shot a hundred today. Not bad, but it’s not “breaking” a hundred, which is my goal. But if having fun and getting good exercise is the measure of success here, I’m doing okay. 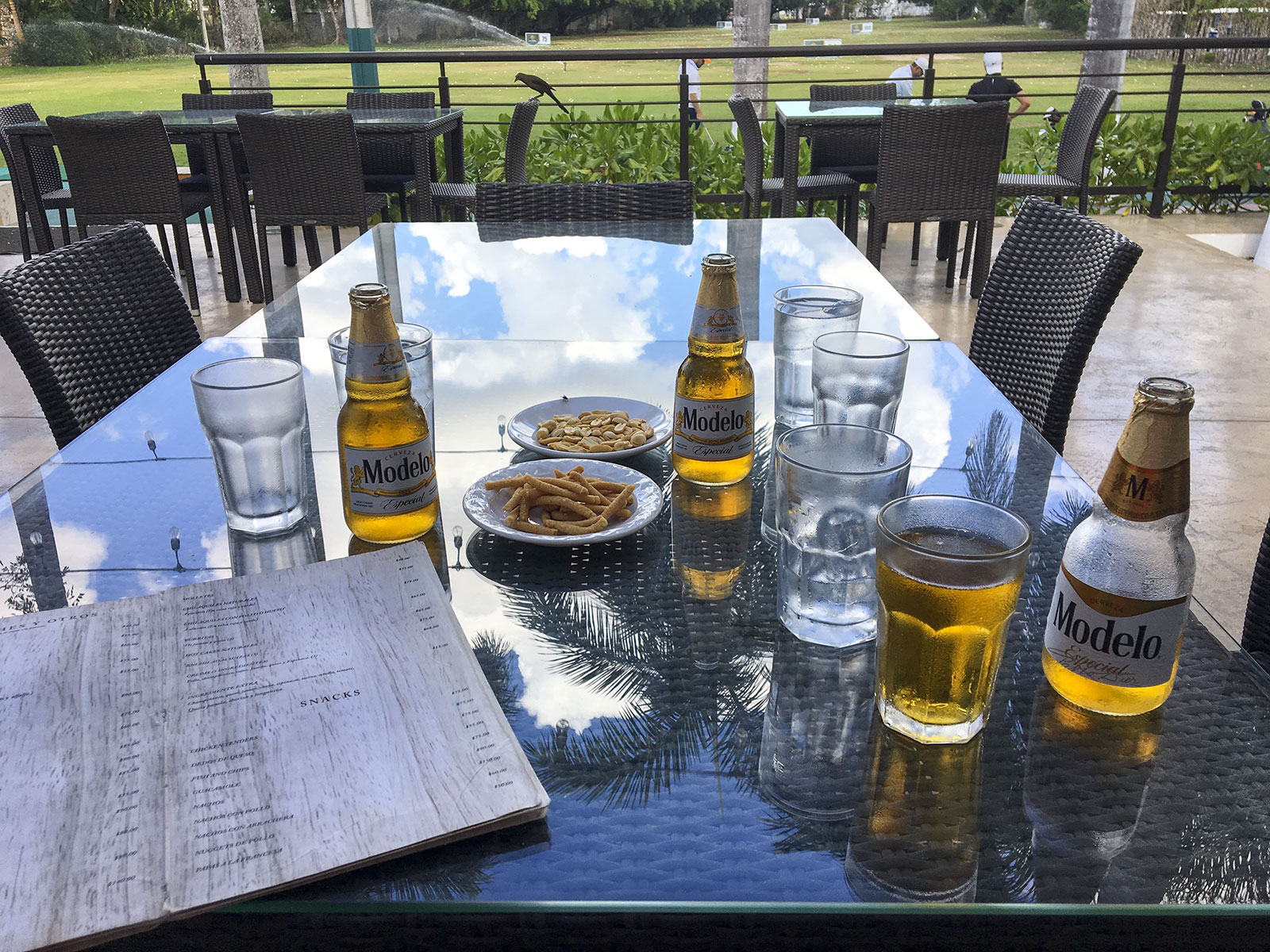 After a leisurely lunch Ken dropped his golf shoes off in our car port and took an Uber back to his place. I showered and threw in a load of laundry. We’ll see if the shorts come out fitting a bit tighter. (I know my ‘souvenir’ Merida cotton t-shirt sure fit a bit tighter after the first washing!)

Dave started another crossword but got interrupted when his iPad need some attention. I phoned the mini-super to order two more big jugs of water and a bag of ice. The guy on the delivery motorcycle showed up minutes later and I got him to hoist one of the big jugs up into our dispenser on the counter for us. Dave tipped him 30 pesos for his efforts (about $2 CAD — on top of the $5 for the water and ice!)

MaryLou arrived mid-afternoon. She’d had quite an interesting morning, visiting an artist and checking out her art pieces and listening to her story.

I went upstairs and took care of my laundry and read my Kindle on our balcony where the dark rain clouds were making the temperature downright comfortable. I don’t think we had a single drop of rain, but it sure looked like we might by late afternoon. It was after four o’clock when  Dave called me back downstairs for happy hour. I sent another text message to our landlord to ‘remind’ him that we were still waiting for our Rocket TV to be re-activated. I was pleasantly surprised when he replied, saying ‘try it now’. We did and sure enough, it was working again! Great. Dave was hoping that we could get the Jets game on one of the channels tonight.

Soon MaryLou got busy in the kitchen, making a salad and cooking up some spaghetti and meat sauce. Our kitchen doesn’t have a lot of utensils, but MaryLou managed to find what she needed to get a meal on the table.

After supper, and another fine discussion, everyone was soon back at their stations. Dave worked on that crossword puzzle while he watched the Jets, and MaryLou got caught up with the latest news on Facebook. After I’d finished doing the dishes I went upstairs to watch the CBC National and write my journal. I’d gone to bed rather late last night and so after a bit of TV and reading a few more chapters in my book, I called it a night.