Today is Sunday. That means we watch CBS Sunday Morning. And NFL Sunday. And Fareed Zakaria. And football. But first… 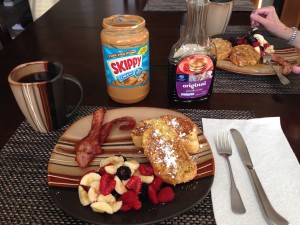 Sue did six loads of laundry. There were 2 NFL Wild Card Playoff games on TV today. I watched the Colts beat the Bengals. Then the Lions lost to the Cowboys.

In between, Sue and I went for a walk to Ed and Val’s house and back —  to return some table games we’d borrowed from them. The day was bright and sunny and considerably warmer than it’s been for the past two weeks — and we’re happy for that, although it would have been nice to have this weather for when ‘the kids’ were here. 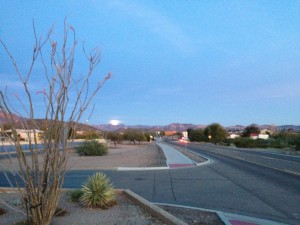 After the Dallas game I took the van to the car wash — just to rinse off some mud splashes. There was a nearly full moon peeking out over the top of Superstition Mountain but by the time I’d parked the van and got my camera out it was already up above the mountaintops. But the red sky in the west was worth a photo. 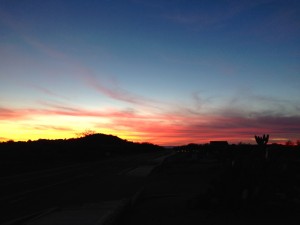 Back at the house Sue had cheeseburgers ready for supper. We watched 60 Minutes and then switched to our schedule of downloaded TV shows and watched another episode of ‘Suits’. Then we caught the premiere of season five of Downton Abbey. And the News. And soon it was time for bed.