After my yogurt and bran flakes and fruit breakfast, I worked on a website until it was mid-morning. Robyn (our host) came around and offered to show me where the ‘extra’ bikes are in the garage. She’s bought a couple of new helmets and we’re free to use them. She gave me a map of all the cycle paths around here — this must be a cyclist’s paradise. You can cycle off-road on wide cement paths for miles and miles and miles! It’s unbelievable!

So Sue and I put on the new ‘hats’ (at home we call them cycling helmets) and adjusted the seats on the bikes and set out on a bike ride. We went along the waterfront, along the beaches, right up to the big harbour at the corner, then around the point and along “Marine Parade”, the main waterfront road that leads to and past the city centre. All along the route there are facilities provided by the city to make life along the bike paths interesting. Lots of parks for kids, for walking the dogs, for exercise, for camping, for sitting and watching the boats and the kids, for looking at the ‘art deco’ styles that this city is world-famous for. 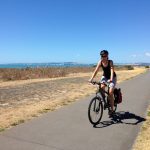 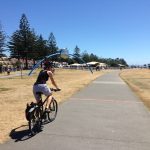 Lots of activities along the way. 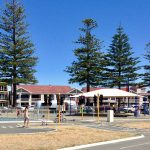 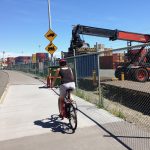 Passing the ‘real’ working harbour between the city centre and our place on the ‘east point’. 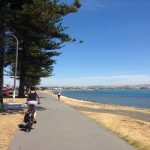 View of ‘our’ bay — sailboats were heading out into the bay.

And the cycling paths go EVERYWHERE — and forever. We cycled for an hour until we’d passed the Maraenui Golf Club, where Robyn is a member. We stopped in at the clubhouse to enquire about tee times and twilight rates. Tomorrow after 3pm, 9 holes for twelve bucks. Okay, we’ll try that! We came back along the path, past the ‘Junior Bike Track’, which has been specifically designed for young children to learn basic road safety. It has working traffic lights, stop and give way signs and a roundabout, where children practise their cycling and road safety skills. Cool! And skateboard and mountain-bike parks — lots of them! And they’re building more. And they are getting a LOT of use! Young people, parents, grandparents — everyone is out and about and ‘ACTIVE’! (or ‘ECK-TIV’, as they pronounce it here in ‘kiwi’ talk.)

Sue made lunch. After lunch it was time to do some ‘Saturday cleaning’. (It’s not Saturday, but Sue says with such a small apartment it gets dirty quicker — and we DO have the windows and doors open most of the day, no screens, close to the beach, and big wind for the past few days. I (finally) took our hiking boots and runners and washed them in the big laundry tub in the garage — they were still coated with a layer of brown mud from the lava we walked through on our big hike. Then I went back to my computer project.

Just before 3pm we headed out to the Napier Golf Course. A quick 9 holes before supper. The sun was warm, no wind today, and I was carrying my clubs. Nine holes is enough for this afternoon. We both played quite well until the ninth hole. I think we both shot 10 or more on the last par 5. Oh well, we’ll try to do better tomorrow.

We stopped at our local grocery store on the way home for a bottle of wine to go with leftover Thai food from yesterday. Back at the apartment we enjoyed a little happy hour on the patio before Sue warmed up the curry and rice dishes.

After supper we texted back and forth with the Funks — they are up in the northern part of the North Island. Then we watched a bit of ‘local’ news on TV and surfed the channels for a while before we called it a night.