It’s Monday morning here. It’s Sunday afternoon at home. It’s the day when the AFC and NFC championships are decided. The teams that win today go to the Super Bowl.

We had breakfast in front of our TV today. I ate my morning toast and bowl of fruit (kiwi, nectarines, bananas) and watched the Atlanta Falcons beat the Green Bay Packers. I’m not cheering for the Falcons, but I’m sure not cheering for the team that beat my New York Giants. So when the Falcons began the game by pouring it on, and never let up, and taught the Packers a thing or two about good hard football, and even those desperate Hail Marys by Aaron Rodgers weren’t working for the Pack — well, I couldn’t help it. I know it’s not that good for me to find joy in another’s misfortune. But it DID ease some of the pain left over from the Giants’ loss. Schadenfreude.

Not quite so lucky in the next game: by the time we had eaten our sandwiches for lunch, the Patriots had more or less sewn up another win. Not the outcome I was hoping for, but not unexpected. Let’s hope the Falcons play like they did today in two weeks, in the 51st Super Bowl.

Whew! well, that’s how we frittered away a cloudy, but warm and calm day in Napier. Sue did two loads of laundry. Read quite a bit. I worked on a computer project in between football plays. 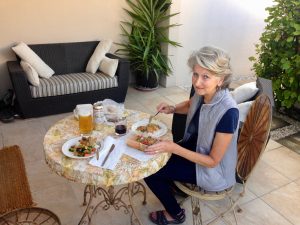 In the evening we went out for a short walk in the neighbourhood. Ordered some ‘take away’ from the Thai restaurant and walked around the harbour until it was ready to be picked up. We ate on our patio.

After supper Sue watched a bit of TV and I continued my computer work. By 10 Sue was asleep while I was watching YouTube videos of Bill Maher ranting about Trump.