Tuesday: After a quick breakfast we hit the road to Tucson. The day was a bit nicer than the weekend weather had been, but it was still quite cool. 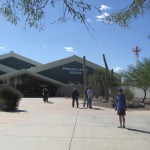 Our first stop was at the Pima Air & Space Museum. We thought we were too late for the 10:30 tour, but we quickly bought tickets to 2 tours that fit our schedule. In fact, one tour was going to run right up to the next, so we decided we better get something to eat before our first tour left. We ordered a hot dog and fries and coffee from the museum restaurant. While we waited for our food the tram outside the restaurant window was filling up quickly. Then it left! We were still waiting for our food. Quick check with the ticket taker and we were reassured that another tram was coming. We actually gobbled up the hot dog and took the fries and coffee with us on the tram.

It was an open tram, and we were a little under-dressed for the cold wind. Our tour guide was a retired pilot, 15 years in the air force followed by a career as a commercial pilot. He was extremely knowledgeable about all the different aircraft we looked at as we circled the big outdoor yard at the museum. I think he knew everything about every type of aircraft on display — and he clearly loved to drive around and tell us about them. He was an excellent guide. He was also a war movie buff and identified many of the planes as the one that Jimmy Stewart flew in such-and-such movie. In fact, at one aircraft he stopped and told us that he himself had been a pilot of a plane like that in Vietnam and had been part of the rescue mission for a downed American pilot caught in the cross-fire in a river. The story was made into a movie, “Bat 21”, starring Gene Hackman. When we got home I looked up the movie and actually downloaded it so we can watch it sometime.

After our tour we were invited to visit the various hangars and buildings in which many more aircraft were on display. We were cold. We opted to sit in the warm restaurant and have another coffee before going on our next tour.

Our second tour was the Aerospace Maintenance and Regeneration Center (AMARG), also known as the “Boneyard.” The facility is located adjacent to the Museum at Davis-Monthan Air Force Base. The bus drove us around the 26 acres of neatly parked planes. Our tour guide was once again a retired pilot — this one had served in the Air Force for 30 years. Like the first guide, he was knowledgeable and seemed to genuinely enjoy what he was doing. It seemed that all the docents at the museum put in lots of volunteer time, many coming from other parts of the US to Arizona for the winter in order to spend time at the museum. The guide’s talk was accompanied by a soundtrack of clicking cameras. All around us were people with big cameras and huge lenses, and they were snapping hundreds of photos at each pause along the route. I’m not sure how they will cull and catalog their photos! We actually never got off the bus, so all of the photos here were through the windows of the bus. But we were happy to be sitting in the warm bus, sheltered from the cold wind.

After the AMARG tour we got back into our van and headed to the Saguaro National Park. The park actually has two parks, one on either side of the city of Tucson. We went to the East park because it wasn’t far from the museum and we were told it had a loop drive that we could do. It was already 3 or 4 in the afternoon and we were running out of time.

The Eastern Rincon Mountain District rises to over 8,000 feet and includes over 128 miles of trails. We followed the Cactus Forest Drive, a one-way 9-mile drive just south of the Santa Catalina Mountains. We parked our van and went for a 2-mile hike along some of the marked trails. We expected to see a forest of saguaros. While the desert vegetation was very beautiful, we both agreed that we see more saguaros along the Hieroglyphic trail in Gold Canyon! 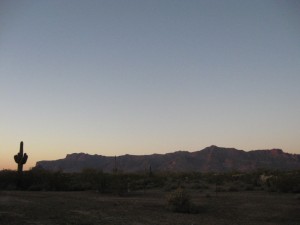 On our drive back home we stopped in Catalina to refuel the van — gas was $3.68/gallon as compared to $4.00 in Phoenix. We got home just as the sun was setting. Stopped for a couple of photos of our own Superstition Mountain with the sun setting behind us. Sue warmed up leftovers and we sat in the living room and watched various reruns on TV. All that adventure tuckered us out and we were off to bed before midnight.