Had my usual coffee and cereal at around 7:00. I worked on a web project for most of the morning, taking breaks to read the news and listen to some Wilco. At around 11:00 I got on my bike and went for a bike ride. I ended up stopping at a couple of dentist offices downtown — I was hoping they could make a little adjustment on my braces which have been bugging me a bit. It’s amazing how many dentists there are in these retirement centres! Just like in Phoenix, it seems that there is an “urgent care” clinic and a dentist office at every corner. Gotta keep these old bodies from falling apart completely, I guess. I was just cycling around, checking out the neighbourhood, and was pleased to find that the Total Wine store just a couple of blocks from my house has plenty of Pilsner Urquell on hand, although I’ll have to visit them again when I’m driving the van — it’s a bit risky to transport a six-pack of bottles on the bicycle! Anyway, in the end I learned that no dentist in California is going to put their pliers in my mouth if I’m not their patient for fear of getting sued. America is, in the words of Warren Zevon, the land of lawyers, guns, and money. And wildfires too, I guess. (My brother emailed me, asking “What’s your opinion on the forest management practices there? Did you find them grossly mismanaged too?”) Fortunately there are no fires, and no wicked snowstorms, here in the land of country clubs and Betty Ford clinics and green fairways with pretty fountains to catch an errant tee shot and dentists who won’t adjust your braces. 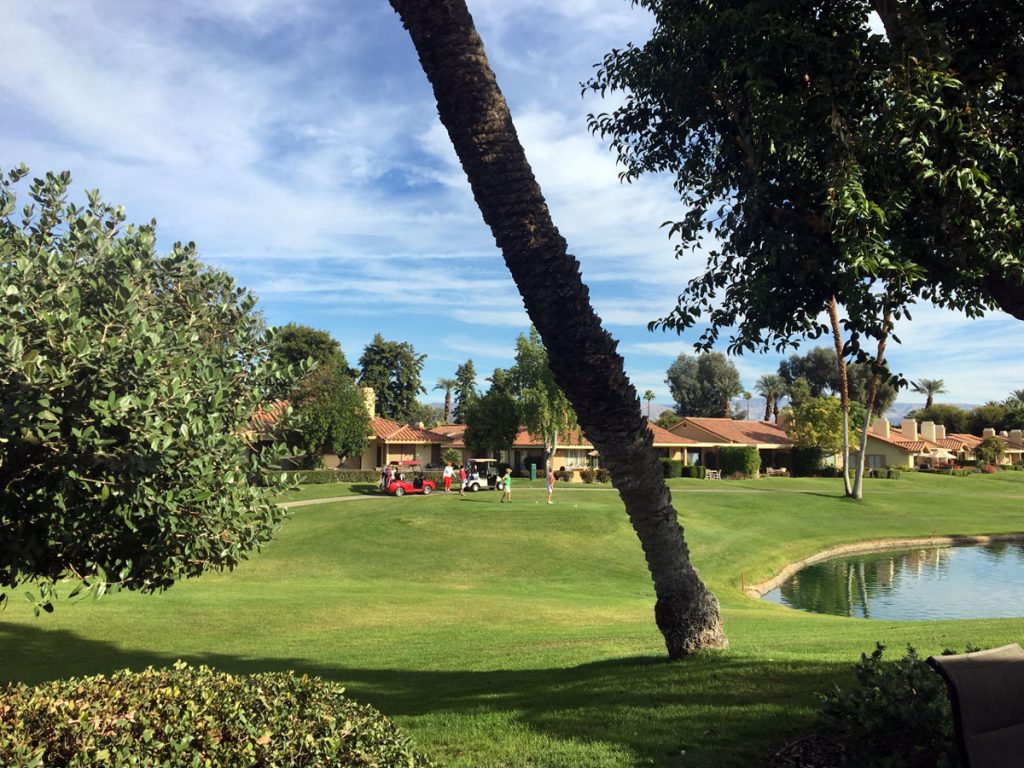 Ladies in their ‘pimped-up’ golf carts, from my patio window. 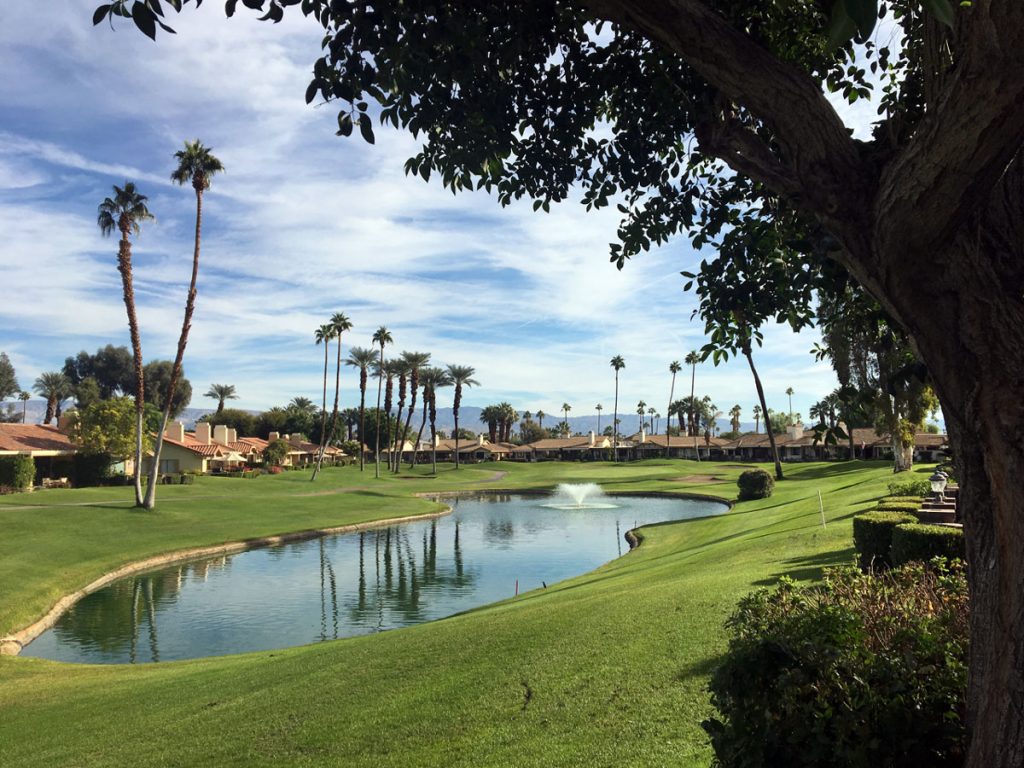 The water hazard with a fountain, on the par 3 hole.

After lunch I continued slouching on the couch and coding on my MacBook — this surely can’t be good for my sore back! I checked GolfNow for a ‘hot deal’ — shoot! everything is discounted after 2:00pm — after all, the sun sets at 4:42 so fat chance you’ll finish 18 holes. And that’s how I ended up at Cathedral Canyon at around quarter after two. I paid $25, put my bag on the back of a cart, and headed for the first tee. I hit two balls off the tee, both good shots! I was zipping right along and caught up to the couple ahead of me on the third hole. They waved me to play through, which I did. (I pocketed my second ball and proceeded to hit a great 8 iron shot over the water hazard to within 12 feet of the pin with the couple looking on. Then I drove up in my cart, walked smartly onto the green, and sank that putt for my second par! “Nice putt,” says the man. I smiled, thanked them for letting me play through, and drove off to the next tee box. For the record, that NEVER happens — almost without fail, when someone lets me play through I get nervous and make a TERRIBLE shot.) It was clear sailing after that — I continued to play well and finished the front nine in an hour. But I caught up to a backlog of golfers on hole #11. So I took out that second ball and played two balls on holes 10, 11, and 12. And for good measure and I did that loop twice. By the time I got to the 14th hole it was 4:30, time to return the golf cart and call it a day. Besides, my back, which I’d strained a bit on Sunday, was starting to stiffen up and I needed to rest up so I can play again on Saturday. Not a bad afternoon, though.

When I got home there my phone twanged that there was a new photo from Max in our shared photo album. I had a nice FaceTime visit with Max and Alex. He is reading and doing crafts and playing piano and always happy — and happy to FaceTime with me. The joy of my life. I had a fine supper of pasta with mushroom sauce and some very spicy meatballs — and looked over the playbill at the cinema. I drove down to the theatre and watched “Tea with the Dames”, a ‘documentary’ featuring 4 old English actresses sitting around and talking. Meh, maybe that is a little TOO quiet for me — I didn’t really know many of films they referenced and there were absolutely no car chases and nothing got blown up and not even a hint of a love scene. But I stayed awake right till the end. Back at home I made myself a nice drink and watched the CBC National News. I even managed to catch the opening monologue of Kimmel and Colbert, which starts at 11:34 here. But I’m quite sure that by 11:44 I was in dreamland.